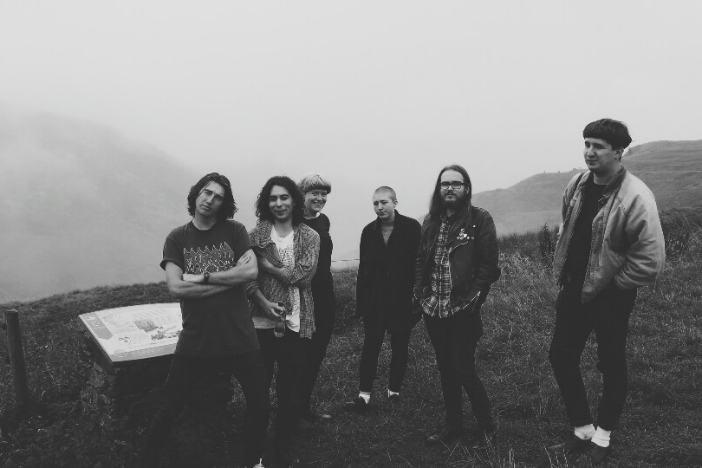 Last year started well for Cardiff noisepop group Joanna Gruesome: debut album ‘Weird Sister’ had just won the Welsh Music Prize, its follow up ‘Peanut Butter’ was gathering wide acclaim and the band were picking up attention on both sides of the Atlantic thanks to a touring alliance with the USA’s heavily tipped hardcore newcomers Perfect Pussy.

Then, on the eve of ‘Peanut Butter’’s US release, frontwoman Alanna McArdle quit, citing the need to focus on her mental health. Joanna Gruesome are finishing their current mini-tour at the Hope And Ruin tonight having split her vacant role between two replacements, fellow travellers from within the UK DIY scene. To the left, doubling up on third guitar, Roxy Brennan (of Two White Cranes and Grubs), and in the centre, with a keyboard, Kate Stonestreet (from Pennycress).

As the now six-piece band crash headlong into a non-stop opening trio of ‘I Don’t Wanna Relax’ (a fair title), ‘Madison’ and ‘Psykick Espionage’, the division of labour is clear. Brennan handles the melodic, sung lines, Stonestreet the more aggressive, screamed ones, a Good Cop/Bad Cop split that McArdle used to pretty much front out alone, with shy guitarist and songwriting mastermind Owen Williams adding soft vocal support.

It’s a balancing act carried into tonight’s sole new song, a direct hit of chugging guitar chords that finds Brennan singing about boredom and the radio (we think) and Stonestreet yelling about, well, it’s hard to make out from the back of this busy room. The set-list simply refers to it as ‘New One’ and like many of this evening’s most highly charged tunes (‘Honestly Do Yr Worst’, ‘Graveyard’) it’s loyally rewarded with whoops and cheers.

Proving that Joanna Gruesome are far heavier live than on record, ‘Last Year’ piles on their multiple guitar and vocal attack until it spills over with My Bloody Valentine force, a comparison strengthened by the ‘You Made Me Realise’ nod of ‘Sugarcrush’ and its none-more-indiepop “Ba-ba-ba/My head explodes” hook.

An encore’s called for but not given – it is Sunday after all – and Joanna Gruesome’s place in Brighton’s indiepop affections appears as strong as ever. They’ve proved their revised frontline live but getting some new songs out soon should help grab back any attention that’s wandered since that enforced shake up.