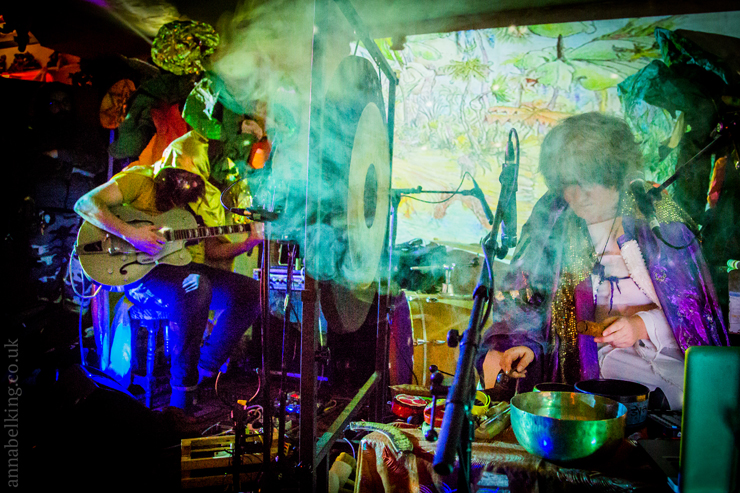 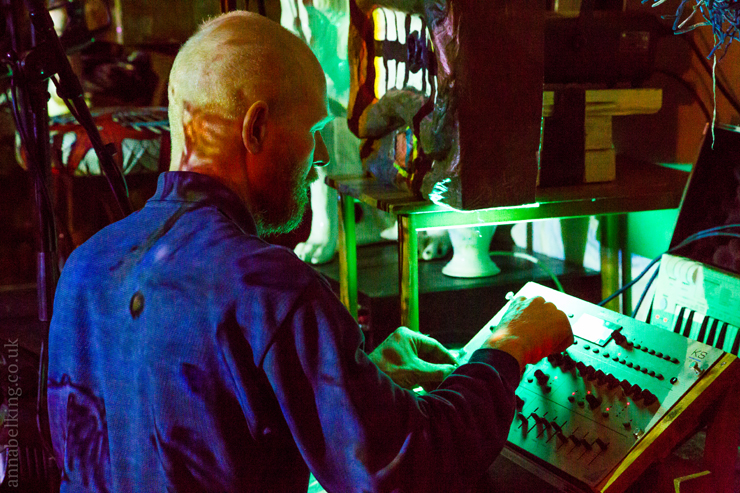 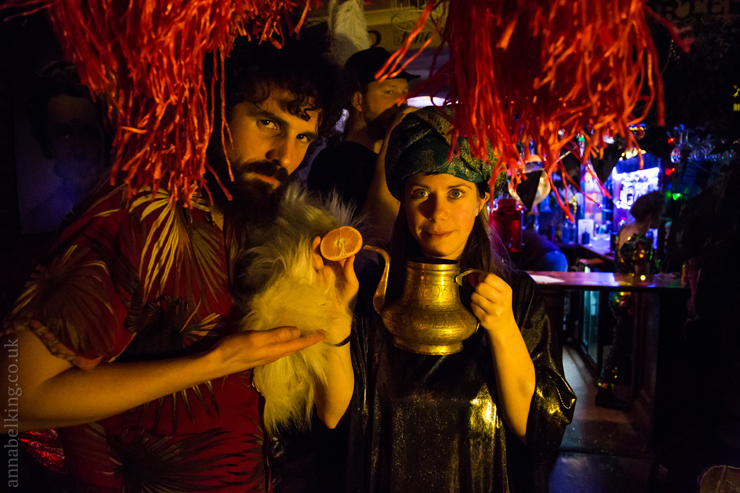 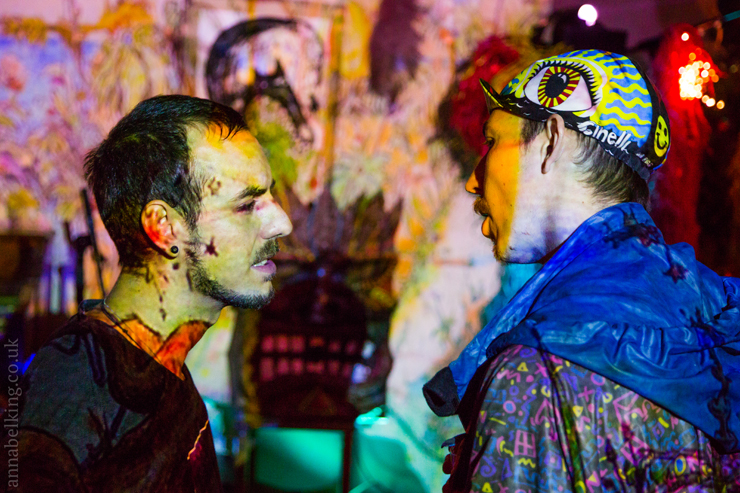 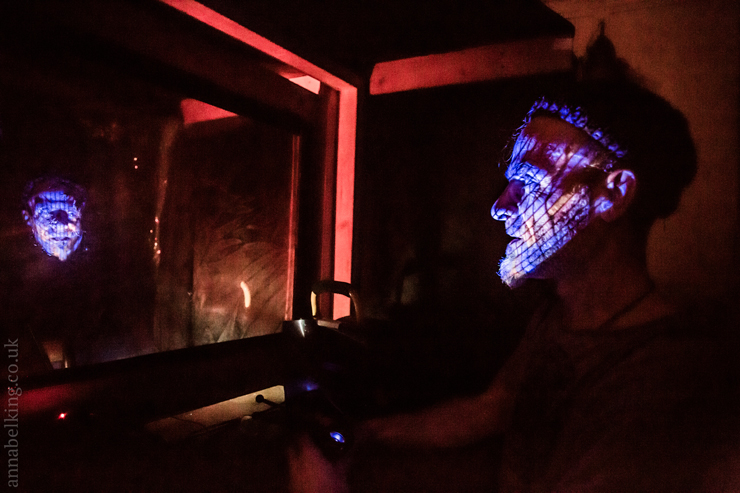 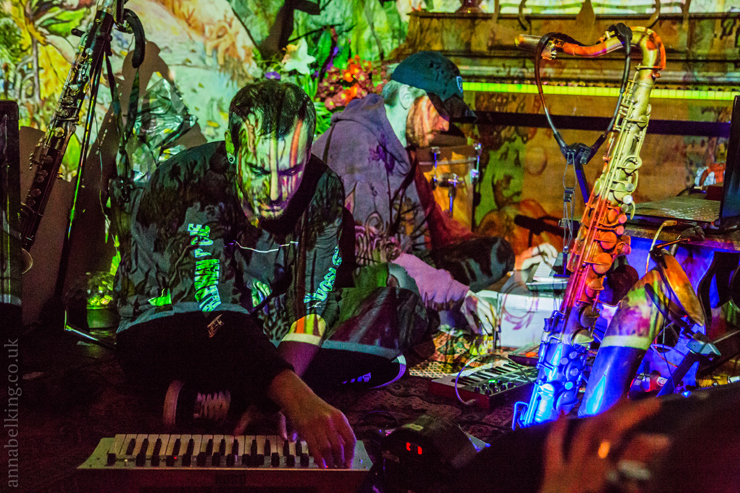 On Sunday, in an all together different dimension from the storm outside, an exotic sanctuary lay within the Rose Hill. Its doors served as a portal to another realm… the realm of King Lagoon.

This immersive experience, which took place over two floors, was the grand finale of a series of three events celebrating the release of King Lagoon’s Flying Swordfish Dance Band’s LP ‘The Golden Lagoon’. The Brighton-based band are renowned for their extravagant multisensory performances of psychedelic Afro-Brazilian music accompanied by smells created by the band’s very own on-stage ‘aroma wizard’. Sunday’s celebration which centred around the album’s surreal musical interludes was characteristically lavish. Its creator, band leader Rodrigo Kerr describes the interludes as “soundscapes evoking an auditory glimpse into the realm of King Lagoon”. The family-friendly and truly multisensory spectacle certainly did not disappoint.

The interior of the Rose Hill had been transformed into the ethereal landscape of King Lagoon’s world dreamt up by Rodrigo and friends. Once inside, guests were met by the heady aromas of incense, essential oils and tropical fruits wafting from the cauldron of an entranced gold-robed wizard. Projections of the album artwork featuring the realm’s mystical inhabitants illuminated the walls amongst drapes of wildly coloured vegetation.

Throughout the afternoon, live musical performances were staged before a backdrop of a large-scale full colour projection of the Lagoon. This created vivid patterns on the instruments and bodies of the musicians and cast warped silhouettes on the walls behind. Soundscapes emerged amongst coloured mist which plumed at intervals from the mouth of a giant’s face.

An eclectic mix of Brighton’s arts lovers sat back to enjoy a cosmic set from God’s Teeth and The Interstellar Tropics and electronic sounds from Alphabets Heaven, Sillagramwiches + mariolenard and FltrLstn Exotica DJs: Electric Ape, Kubla Khan, Ring Modulator and Stephen Kin;Aesthetic. Improvised interpretations of the interludes from Rodrigo (playing various instruments including a sample machine, a thumb piano and a furry harmonic sound tube!), Don Benjamin on saxophone and bass clarinet, Pete Piskov on flute and piano and Iain Paxon on synth were a highlight.

The multisensual surprises did not stop there. Mind-blowing molecular gastronomy concocted by Luisa Pringle of Abeille Bakery delighted our eyes, mouths and imaginations. Guests were also tantalised by Alex Pritchard’s ‘fisherman’s friend meringue drops’ and other offerings. Optical illusions and visuals were provided by projectionist Benedict Sheehan to add to the magic.

Meanwhile, downstairs, mortals of all ages were enchanted by the opportunity to plunge into the Lagoon itself. After completing an underwater quest they were led deeper into a mysterious ‘underlagoon’, the creation of multimedia artist and lagoon spirit, Megan Clifton. Once submersed, participants opened their eyes to an abyss of blue. They had the chance to meet the sea spirit queen, make a wish, have their fortune told, taste mystical elixirs and even have their spirits cleansed! The line between reality and this fantasy realm was well and truly blurred. We didn’t want to leave!​

To get a glimpse for yourself, ‘The Golden Lagoon’ LP is a window into this world that you can take home. It comes with some beautiful and curious artwork and according to my sources at King Lagoon headquarters, there will be an ‘aroma set’ to accompany the album available soon, one smell for each song. Find out more on the band’s website.

Words and photos by Annabel King

Sometimes an article is a bit of a team effort, and those are tagged SOURCE Writers. If you’d like to be part of that team, hit the Contact link at the top and get your work on this website.
← PREVIOUS POST
Japanese Television Review
NEXT POST →
Ghost Stories Review
Mailing List
Recent Posts
Website developed in Brighton by Infobo
Copyright © Brighton Source 2009-2021
King Lagoon’s Album Launch Review - Brighton Source