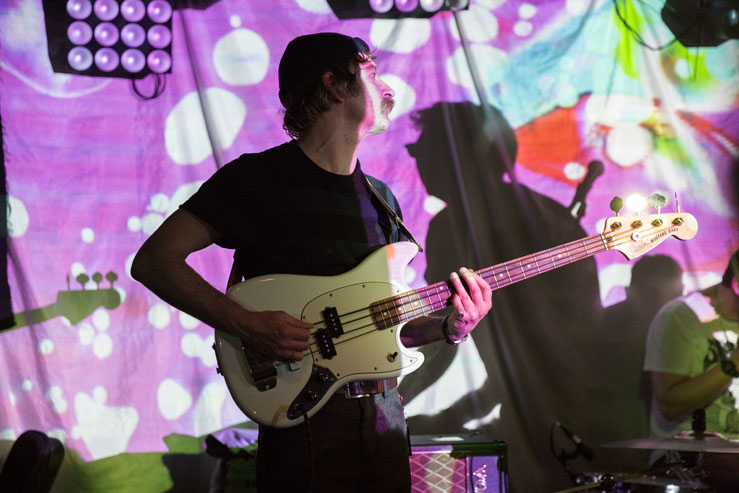 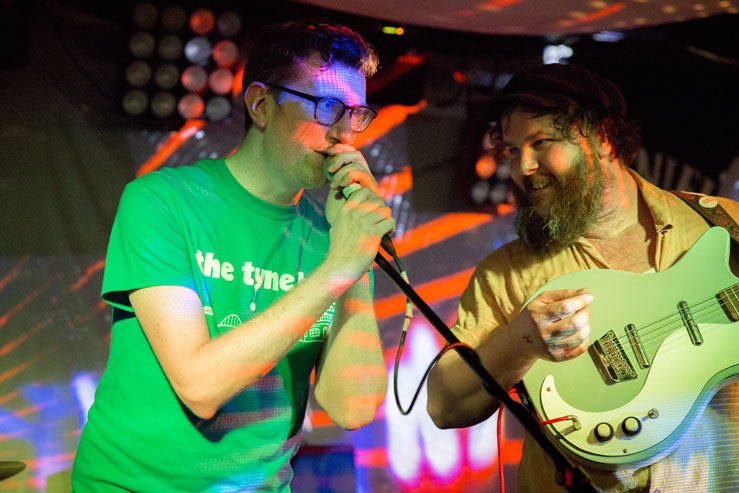 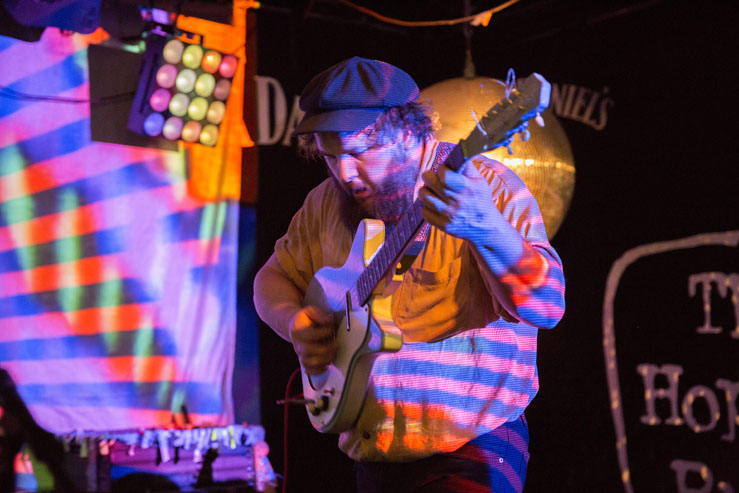 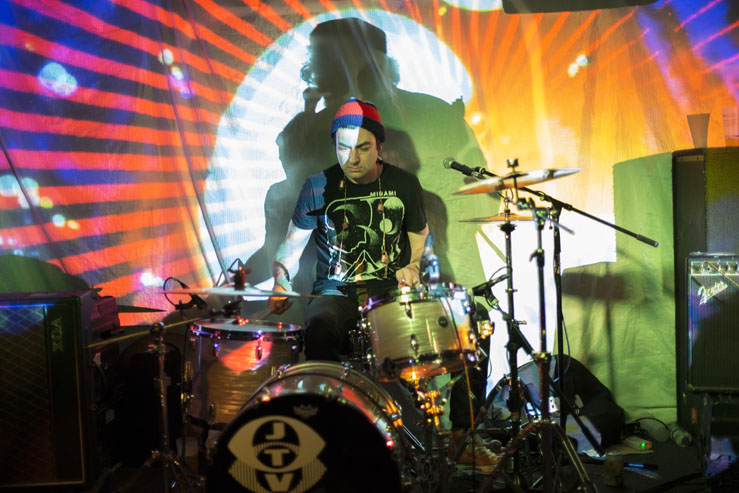 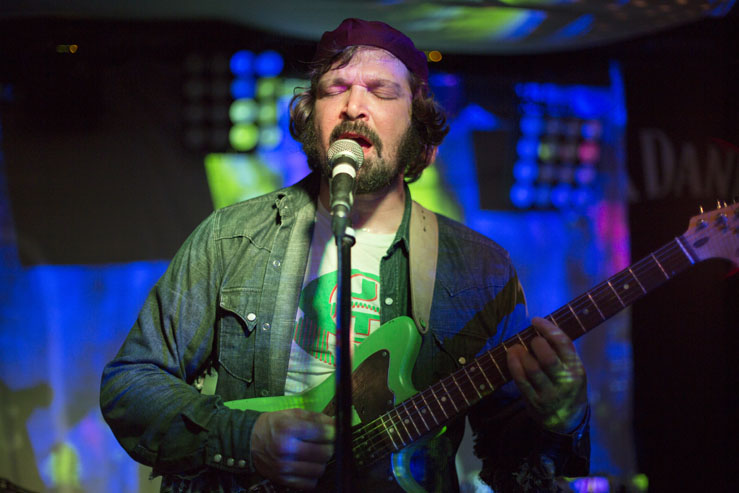 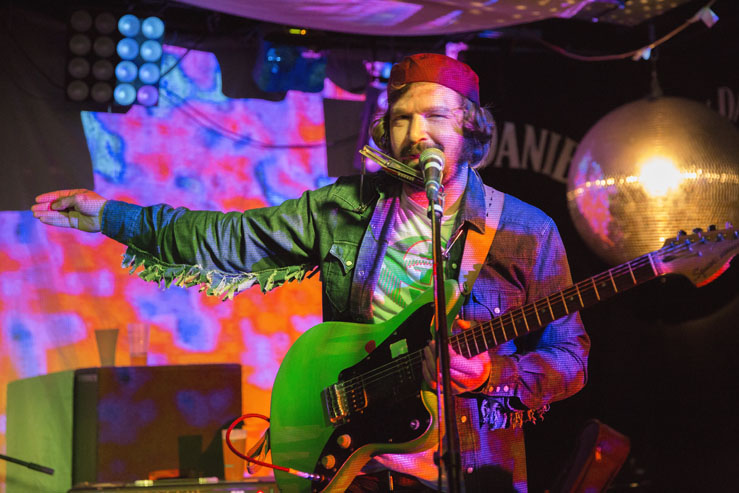 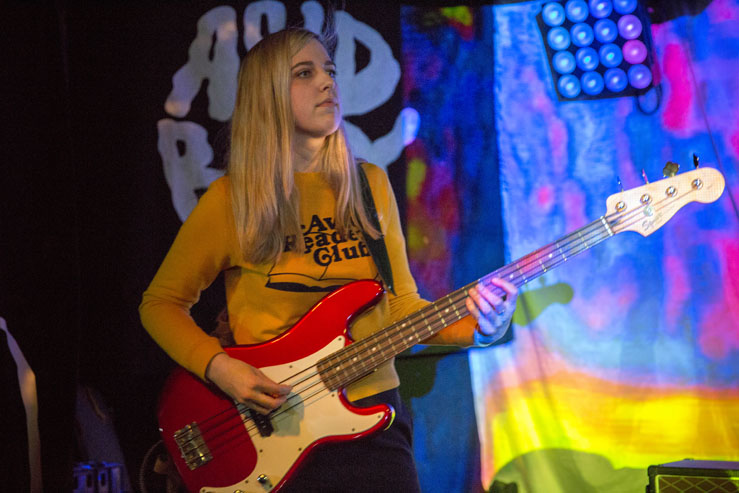 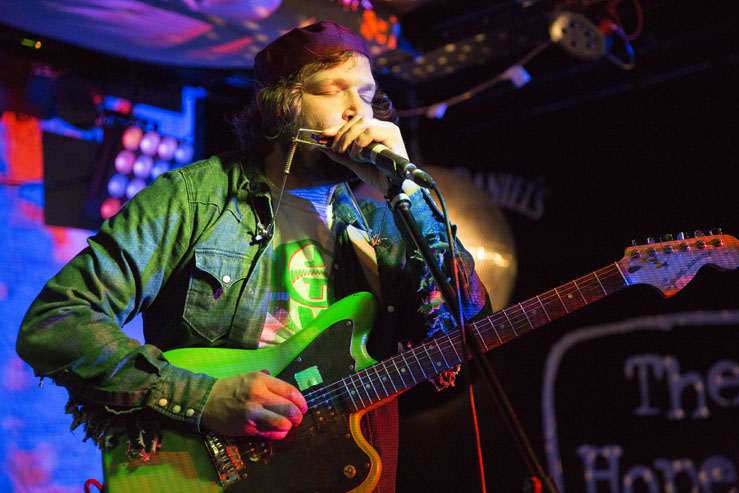 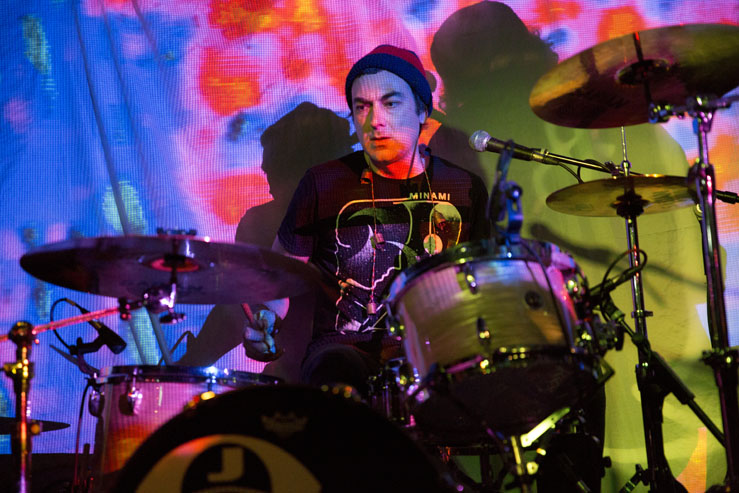 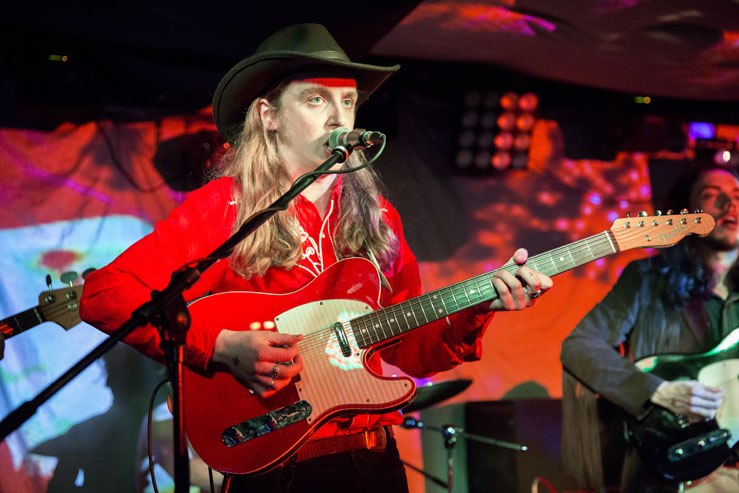 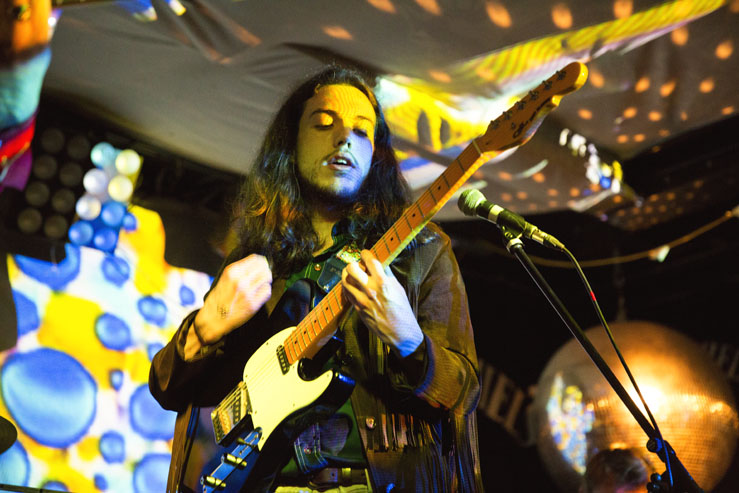 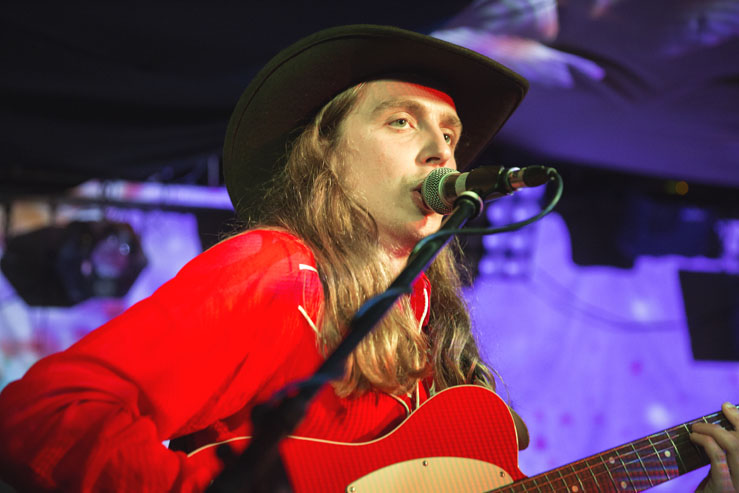 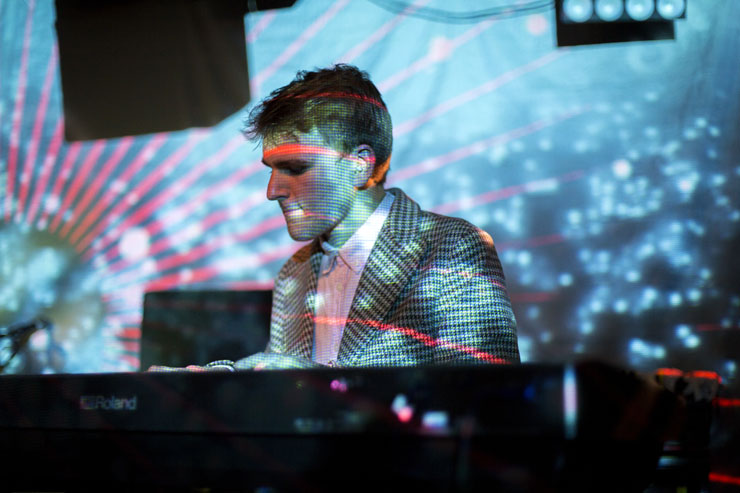 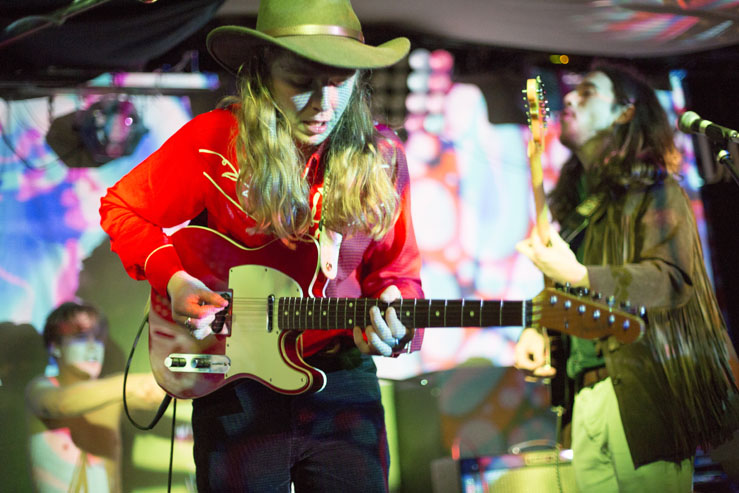 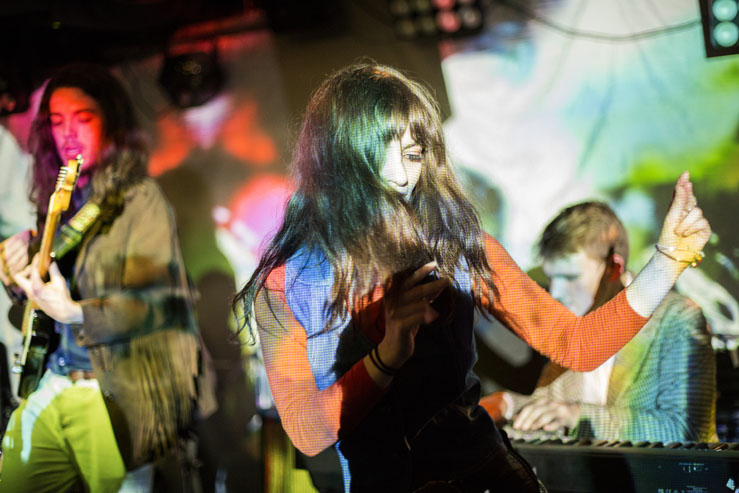 Last Saturday Hurricane Dennis, the storm that sounds like a snooker player, hit town. For those brave enough to venture out, three flavours of psych are on show at the Hope and Ruin, in a sold out gig that headliners Japanese Television later describe as the best they’ve ever played.

And, fair play to them, they also give credit to two excellent support bands (Melt Plastic Group and The Psycho Relics), as well as promoters Acid Box and the fifth Beatle of Sussex psych, Innerstrings, who has his full oil-projection set-up flowing.

The Psycho Relics kick off this cosmic Neopolitan ice cream of a bill with polka dots, tassles, ten gallon hats and a rollercoaster of tight time-signature changes that infuse their tracks with an energy and confidence rare in a band playing their first gig together.

Their drummer gets the outfit of the night award though, for what we can only describe as some kind of rainbow-ostrich-feather cardigan, although it’s not long before he’s discarded it to go skinny drumming.

Melt Plastic Group opt to keep their tops on. Their set begins in stark contrast to what came before, with a foreboding slow-build of an intro, that snowballs in pace and intensity before crashing into an 11-minute krautrock jam.

The hotly-tipped trio’s music is otherworldly and hypnotic; light on vocals but soaked with wah, delay, fuzz, tribal rhythms and spaced out solos. There’s a darkness in the tone and lyrics, but it’s counterbalanced with an impish sense of humour and an amiable self-deprecation.

Fact of the day: Japanese Television’s stylish bass man, Alex, used to be in a great band called Sunlight Service Group with Melt Plastic Group’s singer, Will. And although there is some thread of similarity between JTV and MPG, we can’t quite put our finger on what it is.

The headliners thunder through a set of high octane surf psych that must encompass pretty much everything they’ve recorded.

Sonically they are awesome, and they sure put a shift in. The drummer, in particular, looks like he’s been chucked in the sea by the end. They expend enough energy to power a particle accelerator – maybe not the Large Hadron Collider, but certainly one of the smaller ones. No wonder they’re relieved that this is the final night of the tour.

And what a way to go out. Encores are a rarity at gigs this size, but this crowd demands one. And they repay the favour with a mosh down the front.

We exit soaked and sated. Then it’s off to the downstairs bar for Tuacas and AC/DC at a night called Dad Rock. Which is way more fun than it sounds.