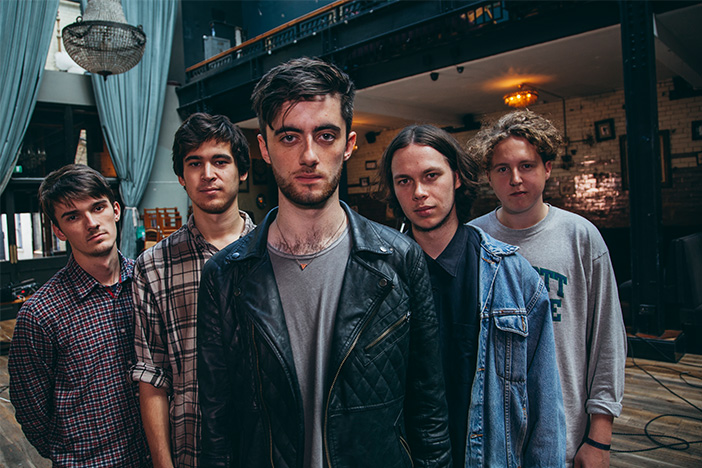 Each month, SOURCE will be compiling a list of new Brighton music for you to check out. We’ve swapped things around a bit so the monthly round-ups will now be at the beginning of each month, so there will be no excuses for missing upcoming local shows! November’s round-up includes tracks by The Island Club, True Noir, Tigercub, Team New Band, Max Pope, Christopher Matthewson, Via Tarana, Kudu Blue and Ingrid Plum.

Brighton five-piece The Island Club (pictured) provide uplifting indie music with quirky melodies, dreamy soundscapes and disco licks. Their debut single ‘Paper Kiss’ has been receiving some decent plays across the globe, and they recently supported Prides at The Haunt. The single is being released in a couple of weeks on Friday 20th November.

Glittering goth duo, True Noir, is back with the stunning new single ‘Voices’. It is a brooding track with snippets of dark wave indie and self-assured vocals from siren front-woman, Megan Rees. The duo will be playing Bleach on Saturday 21st November.

Tigercub
‘Pictures of You’ (Venn Records)

Last month we wrote about Demob Happy. Following in the same vein is Brighton grunge rock band, Tigercub. The first track to be released from Tigercub’s new EP, ‘Repressed Semantics’, is ‘Pictures Of You’. On first listen, the song appears to be a chaotic mash of emotions, veering between soft and enticing moments, and louder, more aggressive sounds, yet the band maintain control throughout the track. It can’t be healthy to carry round all these suppressed emotions, so expect them to blow the lid off when they play The Haunt on Friday 27th November. They will be supported by Youth Man.

Alt-punk rockers, Team New Band, have just released their new single ‘Horrowshow’. The track is a medley of riotous riffs and snappy vocals that’s pretty damn catchy. Celebrations for the single release will be held at the Hope & Ruin on Friday 6th November and everyone is invited up on stage to party with the band.

Max Pope
‘Less Than Nothing’ (Decisive)

The 20-year-old Max Pope returns with ‘Less Than Nothing’, a track he says is “about achieving nothing with your time”. Ironically, during his period of little productivity, Max has managed to produce a confident and expressive track, with little evidence of there being any writer’s block in sight. We would highly recommend watching the video for ‘Less Than nothing’, which sees Max amongst his friends and collaborators, in an unnervingly unusual setting.

Now for a little EP teaser from Christopher Matthewson, with his cover of Joni Mitchell’s 1969 classic ‘Woodstock’. Originally from Ireland, but now residing in Brighton, Christopher cites influences from Neil Young and Leonard Cohen. With this in mind, it is hard to believe that he is only 21 and producing music with such antiquity. His EP launch will be on Friday 20th November at The Hope & Ruin.

Via Tirana
‘Girl’ (Via Tirana)
GIRL by Via Tirana
The lead singer of Via Tirana, Genti, describes his musical project as a “three piece electronica-kraut-grunge band”, but we think there is more than meets the eye to this Albanian-infused trio. Their music is uniquely layered with pulsating bass lines, experimental guitar riffs and mesmerising vocals, which makes a very danceable electronic sound. Head down to the Hope & Ruin on Thursday 12th November for what we promise will be a very unpredictable and enjoyable show.

Two years in the making, ‘Plangent’ is the debut album from Danish improv singer and artist, Ingrid Plum. Continuing her passion for sound and visual performances, she combines spoken word and vocal experiments with field recordings and electronics. She will be showcasing her work in a one-off performance at St Andrew’s Church on Waterloo Street on Sunday 15th November.

The first single from her forthcoming album sees the local folk singer on fine form. It’s a harp-led folk ballad with a driving rhythm and flowing vocals. Reminds us a little of Regina Spektor, which is praise enough. The single launch is at Marwood Coffee Shop on Friday 6th November.