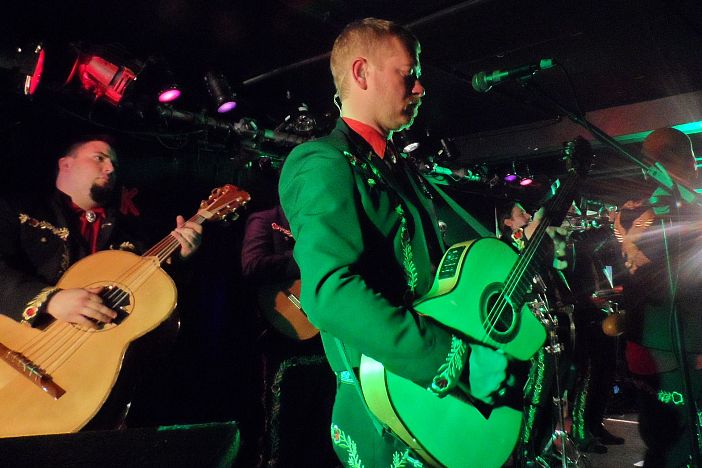 One spin off band with a totally different direction from the original being supported by another playing yet another genre – all rooted in Southern California? Yes, Mariachi El Bronx are back in town. This time they’ve left The Bronx behind and brought along their Dick Dale-inspired beach bum incarnation.

Pounded By The Surf played a set of drum-heavy surf instrumentals that was longer than many headliners often deliver. This could have been a little hard-going but they infused the relentless guitar attacks with a Spaghetti Western touch plus an excellent ‘last chance for romance’ slow tempo swayer, complete with power drums, was a surprising addition.

Leaving the electronics added to their third album in the studio, the headliners retained the three staple Mariachi guitars including the Vihuela and the bass-like Guitarron, a two trumpet brass section and with sole female member, Rebecca Schlappich, on violin duties, Matt Caughthran’s inspired side-project, came to play, swear, drink and party.

With vocals in Spanish and English, the unique and evocative sound worked on every level and constantly conjured up scenes of redemption, vengeance, grief and triumph over adversity. Basically, it’s the best 1960s Western soundtracks delivered with a punk rock attitude.

‘Hero’ was high drama with weeping violin and Matt’s merciless “let them all die slowly” refrain turning into a pleading “don’t send me to Hell”, while ‘Wildfires’ was all pounding drums, Guitarron bass lines and trumpets soaring. After proclaiming Brighton to be the UK’s California, ‘High Tide’ was a lighters in the air moment for the swaying crowd, who were then charged with burning down one of our well known take aways for serving up the ‘world’s worst shrimp burrito’.

With that, guitarist Joby J Ford , strapped on his accordion for a couple of zydeco-flavoured numbers before an epic ‘Silver Or Lead’ hit hard. The pace continued to increase with a Devil-baiting fiddle frenzy and they left us drunk, drained but definitely not short-changed with a sing-along ‘Revolution Girls’ and a trio of encores. Viva El Mariachi!