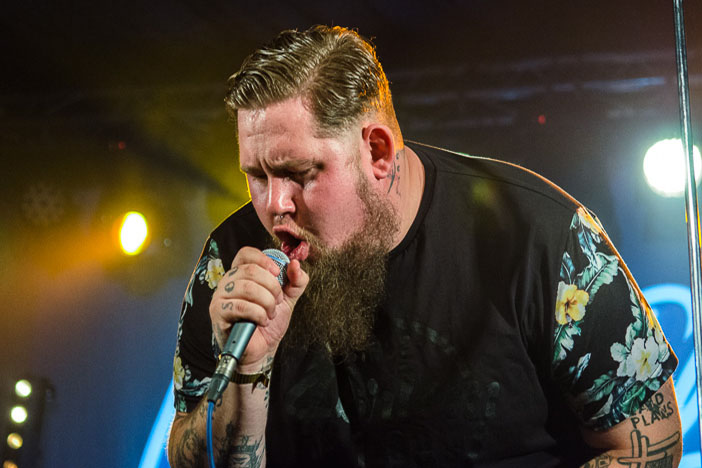 Rag‘n’Bone Man, known to his friends as Rory Graham, has put a lot of hard work in over the last 18 months to lead him to headlining this homecoming show at Concorde2. A steady stream of releases, some stunning music videos and a string of big festival performances this summer is proof that dedication to your creativity can pay off – as SOURCE found out last week when we interviewed the guy.

This is the beginning of a series of live shows across the UK he is curating, tonight bringing Òlah Bless and Tiggs The Author with him to showcase their talent. A sold out crowd full of both friends and fans pack the venue and wait with anticipation, and a lot of love, for the man to grace the stage. He walks on with a wry smile and is possibly overwhelmed by the buzzing and excited crowd looking back up at him. One crowd member shouts out “I love you” and Rory picks them out and swiftly declares his love right back.

He announces how long he’s wanted to play his own show here after supporting some hip hop legends over the years, name checking his long time crew Rum Committee. Early proof that he will not soon forget his roots, despite major label interest, and a reflection of how humble he has managed to stay despite the current buzz around his music and voice.

For this show Rag‘n’Bone Man is backed by a full band and a duo of backing singers, he is clearly at ease on stage and stands central with his name projected behind him throughout the show. If you didn’t know his music you would be forgiven for being surprised, or even shocked, of just how good his voice is live. It is deep, soulful and with power enough to fill this venue with ease despite complaining of a sore throat.

His music manages to combine the emotional depth and sincerity of blues and soul with the engaging rhythm and storytelling of hip hop. The set is made up of songs from his recent EP ‘Disfigured’ as well as favourite ‘Lay My Body Down’ from his last EP ‘Wolves’, even bringing his father on stage to accompany him later on the set. The whole show is an absolute triumph and the future looks incredibly bright for this talented and innovative singer.

Mike is an experienced live music photographer whose work has appeared in The Guardian, The Telegraph, The Spectator and Uncut Magazine. He's been going to gigs for 20 years, expect to find him shooting and writing about rock, hip hop and late night electronic music.
← PREVIOUS POST
Brighton Gets Its Own Currency (Sort Of)
NEXT POST →
Locally Sourced, Sept 2015
Mailing List
Recent Posts
Website developed in Brighton by Infobo
Copyright © Brighton Source 2009-2021
Rag'n'Bone Man Review - Brighton Source