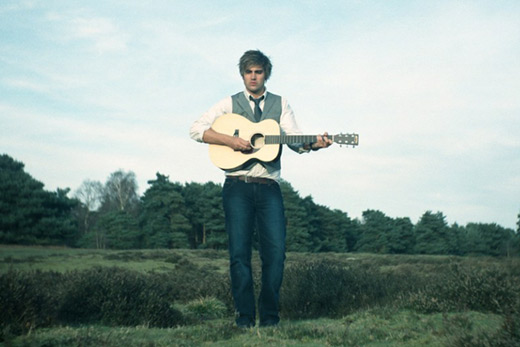 With a film of glistening dew resting on every window pane, shoulders seemingly glued to one another and varying pitches of screams echoing around the familiar setting of Concorde 2, committed fans and followers of the bushy-browed, exceedingly handsome, ex-Busted stud felt obliged to discover what more this artist could possibly have on offer?

Donning a waist coast and tie, Simpson’s soaring presence as he emerged on stage was something quite spectacular; his strapping physique and towering aura allowed this artist to take the concept of ‘centre stage’ to a new level. Opening with ‘Parachutes’, saw hundreds of mouths mimicking lyrics directly back at the beaming figure. His transition from popstar, to rockstar, to solo artist is something that has clearly come naturally. His passion, musical talent and ability to adapt from one genre to the next has induced an easy and successful ride.

Despite common perception of Simpson being a solo live act, he was backed by a very strong and professional band providing the ultimate platform for this star to shine. In particular, tight harmonies complimented his deep and resonant vocals. Influenced by a blend of American folk, Bluegrass and Pop, Simpson has ultimately fashioned a new blend of easy-listening melodies that will undoubtedly have and will entice new ears. Simpson has raised the bar of his musical status; his cleverly produced new sound has lost all rawness that could be found in his work with Fightstar and now accesses an entire new level of professionalism that will certainly appeal to an older, wiser and more mature listening audience.

With the set lasting just over an hour, Simpson was able to showcase the entirety of his latest album ‘Young Pilgrim’. Catchy riffs, romantic, sing-a-long lyrics, simple drum patterns and the occasional cow bell carefully intertwined with an extremely well-polished performance mean that Simpson is inevitably set for mainstream success. Tracks such as ‘Cemetery’ and ‘Down, Down, Down’ were woven into a carefully compiled set-list that managed to fluctuate in mood; allowing Simpson to inflict his lesser known tunes effectively into the open arms of his alacritous audience.

Overall, a fantastic performance from Simpson and Co. Regardless to his past, it is undeniable that his pure talent and adaptability to divulge into different genres is the fundamental reason to his latest triumph. However, the question now is what genre could he possibly compose next!?