Friday at The Great Escape looks like it’ll turn into the biggest day of the festival, with some of the weekend’s most hotly tipped headliners (including Superorganism, Yellow Days and, for their name at least, Amyl And The Sniffers) and an end-of-night Erol Alkan club at The Arch. We hung on in as late as we could manage to catch the following highlights.

Boniface, Patterns
Making their Great Escape, and indeed their Brighton, debut upstairs in Patterns’ bar this afternoon, Canadian alt-pop act Boniface pull an unexpectedly large crowd. Led by keyboard playing frontman Micah Visser, Boniface come across as a self-effacing, embryonic take on The Killers, their delight at simple being here endearing us to lush and upbeat songs like recent single ‘Phantom Limbs’ and last year’s debut ‘I Will Not Return As A Tourist’. On the basis of today’s reception, they could well return as pop stars. (SH)

Valeras, Green Door Store
We’ve already seen Anglo-Venezuelan rockers Valeras once this weekend, christening The Great Escape’s new Beach venue at the delegates’ welcome party back on Thursday evening. When the queue for Stereo Honey at the Albert doesn’t seem to be moving, we’re happy to cross Trafalgar Street to catch them again. With three guitarists, including singer-songwriter Rose Yagmur, letting rip, Valeras whip up a storm on the self-explanatory ‘Louder’ and climactic ‘Colour Me’. They’ve only just come off tour with Brighton’s own Demob Happy but if you didn’t see them then, you might at least know where they’re coming from. (SH)

Kojey Radical, Wagner Hall
East London’s conscious wordsmith Kojey Radical was first captured by SOURCE photographer Mike Tudor at his Great Escape debut in 2016 and he’s returned for each festival since. This time he’s being filmed for Vevo and he and DJ Selecta Suave make sure the obliging crowd are up for helping them make a splash. Fellow festival performer Mahalia makes an unannounced guest appearance, reprising her vocal spot on ‘Water’, which goes down a storm. In a very strong set, Radical’s most politically educational tracks, including ‘Open Hand’ and ‘Kwame Nkrumah’, pack a heavyweight punch. Outstanding. (SH)

Superorganism, The Old Market
First off, let’s state the obvious. Post-modern, international party-pop big band Superorganism are ridiculously good fun live. With seven of their eight members on stage tonight, the show combines bonkers tunes (‘The Prawn Song’, ‘Everybody Wants To Be Famous’), colourful costumes, ADHD tunes and zippily edited videos to brilliant effect. Singer Orono Noguchi’s self-aware banter (“Great job guys! I think we can do this as our… jobs?”) treads a fine line between endearing and smart-arse but her end of set shout-out to disgraced Brighton vlogger PewDiePie makes us start wondering how firmly set Superorganism’s moral compass is set. Turns out the male instrumental side of Superorganism have an iffy past in New Zealand indiepop band The Eversons, whose slut-shaming ‘Harlot’ was deleted by their own record company. Insert Thinking Face Emoji here. (SH)

Bodega, The Haunt
After failing to squeeze through the Green Door for hyped Brooklynites Bodega on Thursday, we make sure we see them at The Haunt the following night. Sonically the band have much in common with Parquet Courts. Physically, however, they’re a one-off. While each of the five members moves in a totally idiosyncratic way, collectively they shuffle and writhe like a post-punk python. Tonight though, they have acquired a sixth member: the Brighton crowd. “Jeez, you guys are really beating the shit out of each other,” comments the singer, surprised by the ferocity of the mosh pit. Better still, his attempt to goad us into gender-based tribalism by dedicating a track to “all the boys out there” meets with… utter silence. Go Brighton! Oh, and one of their guitarists looks like Dolph Lundgren. That alone should be enough to persuade you to catch them when they return to The Haunt on 5th July. (GR) 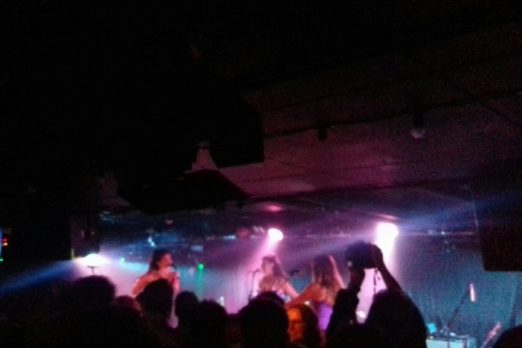 Sassy 009, Komedia
As midnight approaches, we decide to finish the night in the Komedia with Norwegian electronic trio Sassy 009 (pronounced “Zero Zero Nine”, in case you were wondering). Facing one another on stage, Teodora, Sunniva and Johanna share the vocals, overlapping their singing with their dreamy, propulsive blend of synths, rhythms and flute. We’re fairly certain that most of their excellent ‘Do You Mind’ EP gets in the mix but, to be honest, we spend most of the set being pulled into conversation with loved-up late night clubbers who, it must be said, are very much feeling the music. Quite rightly. (SH)

The SOURCE team covered all three days of The Great Escape 2018.
Check out our reviews from Thursday and Saturday.
We’ve also got a review of the Alternative Escape here.

Sometimes an article is a bit of a team effort, and those are tagged SOURCE Writers. If you’d like to be part of that team, hit the Contact link at the top and get your work on this website.
← PREVIOUS POST
The Great Escape 2018 Review (Sat)
NEXT POST →
Brighton Festival Review: Brownton Abbey
Mailing List
Recent Posts
Website developed in Brighton by Infobo
Copyright © Brighton Source 2009-2021
The Great Escape 2018 Review (Fri) - Brighton Source