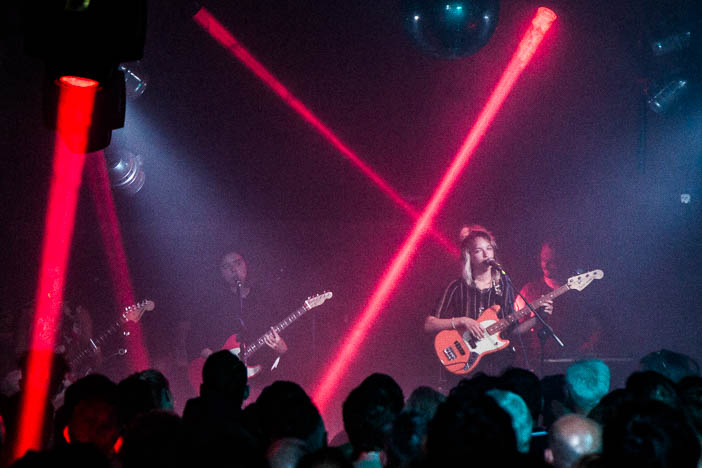 The general mood among our friends in the run up to the thirteenth Great Escape was that this year’s line-up was lacking in both big names and really hot new acts. With just one Spotlight Show, headlined by Mist and MoStack, on the schedule and no major last-minute ‘secret shows’ (compared to previous appearances from Paul Weller, The Charlatans and Kaiser Chiefs) you couldn’t really argue with the former assertion.

Sticking to its brief as The Festival For New Music, however, the festival was stuffed wall-to-wall with rising potential stars, even if we didn’t witness any of the road-blocking queues that had attended past breakthrough shows from Grimes or Django Django, for example. As a bonus, the sun shone down on all three days, making it the sunniest Great Escape we can remember. Here’s the first instalment of our daily highlights.

Pale Waves christened this year’s brilliantly designed and illuminated Vevo stage at the Wagner Hall with gothic glamour, emerging through a dazzling display of cubes and mirrors. Singer and guitarist Heather Baron-Gracie still rocks the ‘auditioning for a Tim Burton movie’ look and can’t resist the odd electro-convulsive Kate Bush dance move but songs like the opening ‘Television Romance’ and new single ‘Kiss’ are big, bold and shining. Even if she does believe that “Sad songs are always the best songs”, Pale Waves dance away the heartache.

One of a handful of South Korean artists over for The Great Escape, indiepop quartet Say Sue Me have been pricking audiences’ ears here with the Sonic Youth via C86 sounds of recent second album ‘Where We Were Together’. Wilting a little at first in an unforgiving full-frontal glare of white stage light, Sumi Choi and her bandmates soon rally themselves, with the surfin’ Shop Assistants buzz of ‘I Just Wanna Dance’ and the rattling rush of ‘B Lover’ standing out. A mid-tempo jaunt through Blondie’s ‘Dreaming’ is superfluous but we’ll certainly catch them next time around. 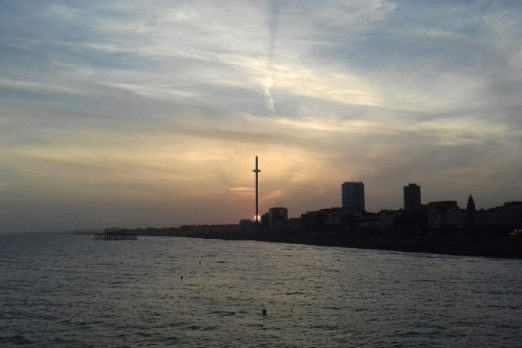 Ok, this is the LAST TIME we’ll mention the stage lighting in this piece but, bloomin’ ‘eck, where are Goat Girl? Somewhere hidden by dry ice, blood red lights and strobes, we think. As our eyes adjust, we can see the London four-piece have been joined by extra members tonight, including a violin player and a four-foot, orange, papier-mâché Goat Girl mannequin. The scarlet surroundings suit the country gloom of murmured songs like ‘Burn The Stake’ and ‘Throw Me A Bone’, although you can’t accuse a band fronted by a singer called Clottie Cream of taking themselves entirely seriously.

Hailing from Jordan and Palestine, political electro outfit 47 Soul were added to The Great Escape line-up before the ‘Great March Of Return’ of recent weeks began. The violence that took place along the Gaza border fence this week adds a grim relevance to their performance and there is the odd keffiyeh scarf waved supportively in the crowd. Much of the audience appears to have wandered in to the Jubilee Square hub out of curiosity, however, thanks to the no wristband required gate policy that’s taken hold here on the concourse. Opening with ‘Mo Light’ and ‘Moved Around’ (from their current ‘Balfron Promise’ album), 47 Soul’s hugely energetic mix of traditional and electronic instruments and chanted vocals moves the crowd in all senses.

Avoided any time-wasting queues this evening, we reach the back of the Brighton Centre in plenty of time for Novelist’s headline slot for The Fader. Joined by DJ Suss, the Lewisham MC is a bouncing ball of smiles, teasing and laughing with the crowd as he gets us shouting along to ‘Dot Dot Dot’ and ‘Afro Pick’. Even when he’s making serious points (as on ‘No Weapons/See Me’) Novelist keeps things inclusive. One of the weekend’s genuinely DIY acts, Novelist recorded and released last month’s full-length debut ‘Novelist Guy’ entirely independently, something he’s justifiably proud to let us know all about. He ends the show acappella (“Straight bars, no instrumentation”) then jumps straight down to meet the loving crowd. Day one, done.

The SOURCE team covered all three days of The Great Escape 2018.
Check out our reviews from Friday and Saturday.
We’ve also got a review of the Alternative Escape here.