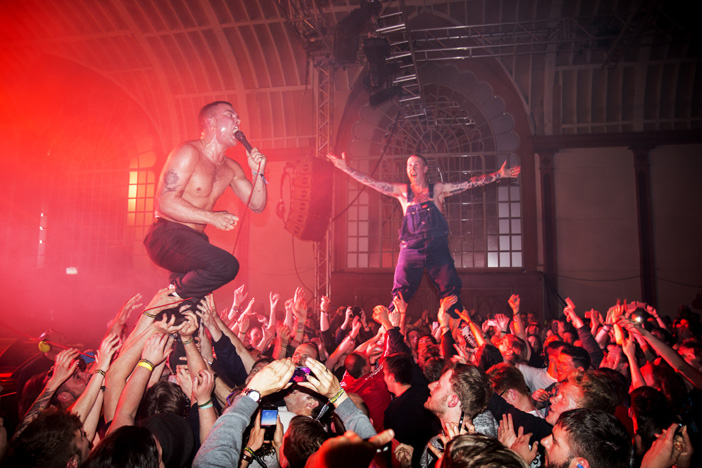 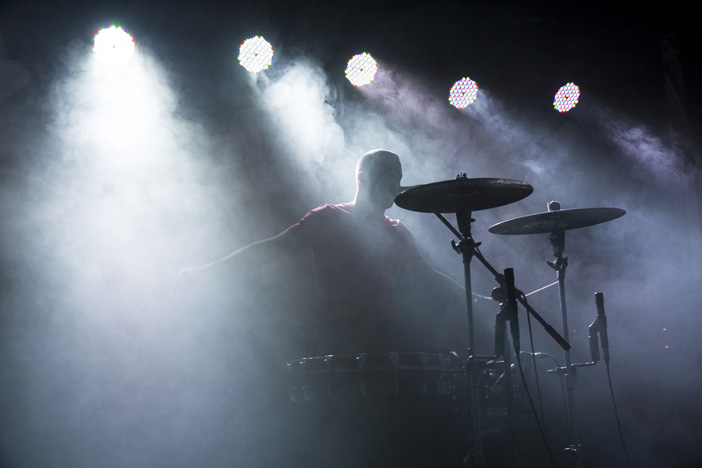 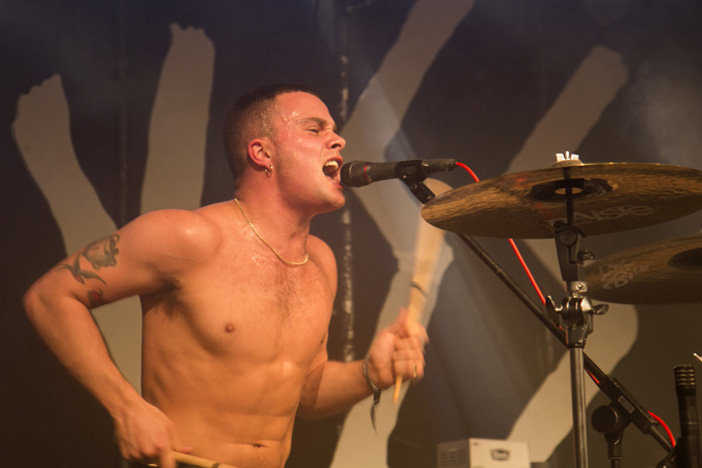 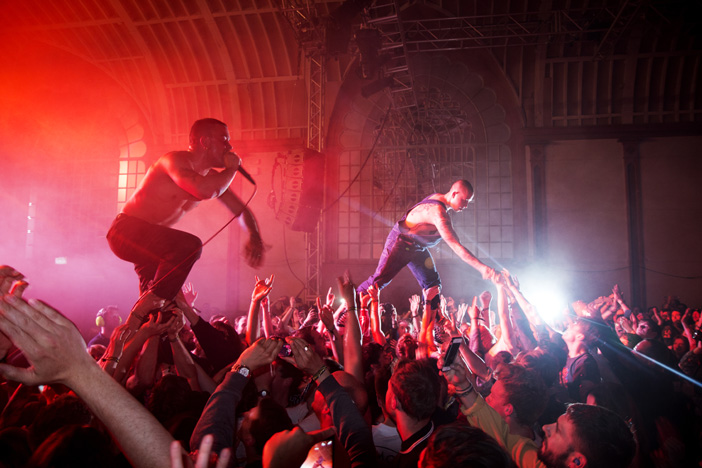 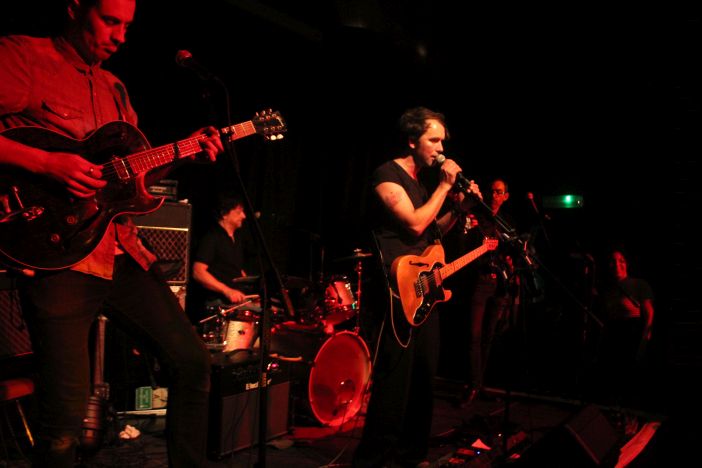 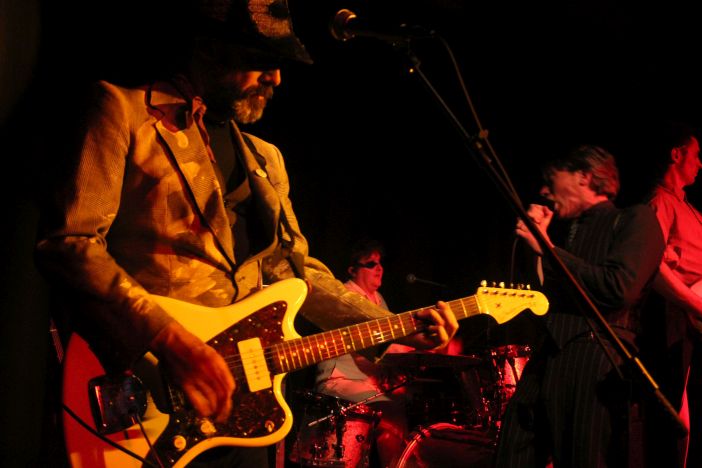 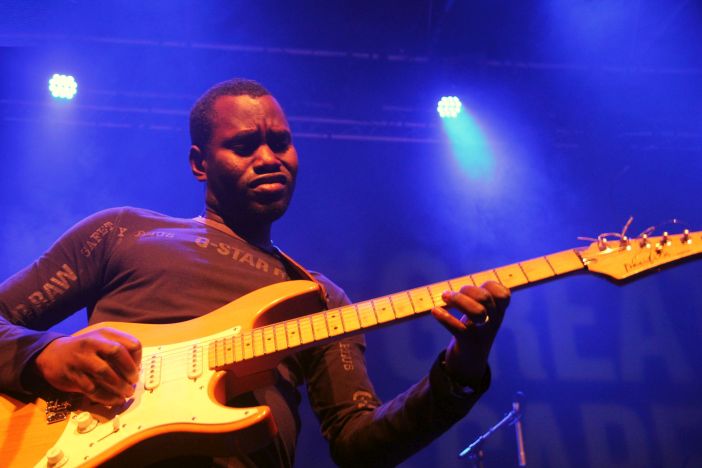 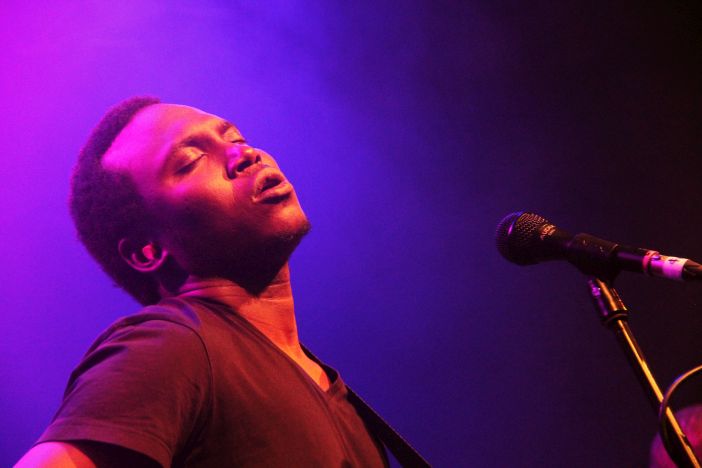 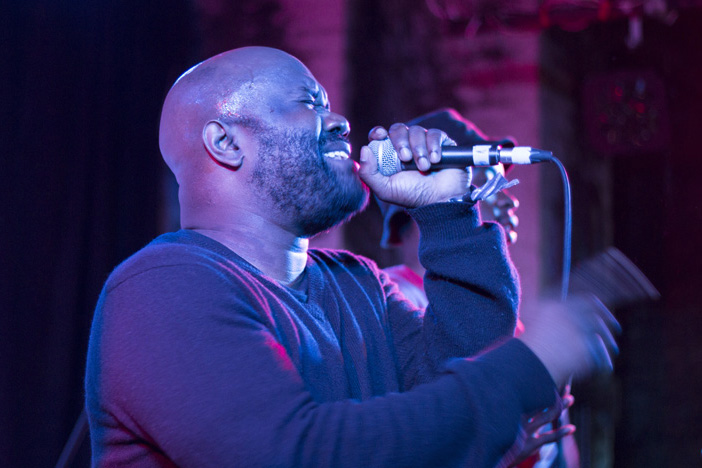 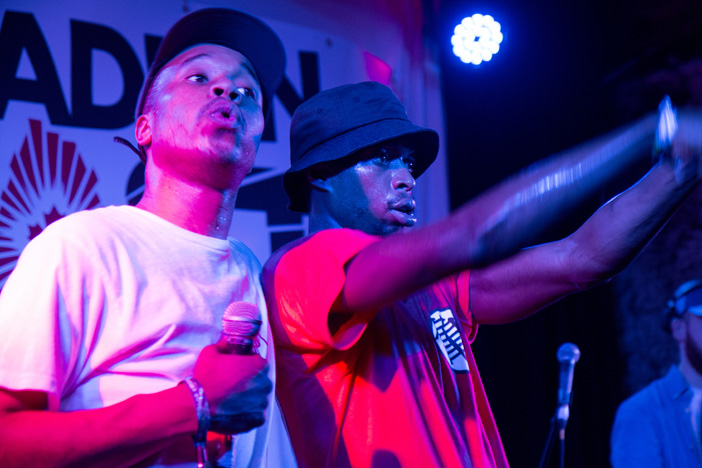 The final day of The Great Escape 2015 saw some African sounds added to the mix, while the rock ‘n’ roll flag was kept aloft by the likes of Mum Dad And The Kids, Bad Breeding and Slaves (as you can tell from the photo above, it was one hell of a show).

Django Django, Corn Exchange
The Djangos had played TGE before, but as they admitted to the crowd on Saturday, they were genuinely amazed they’d progressed to one of the festival’s larger venues in such a short time. Boasting an impressive light display and the kind of chops that only come from touring the same album for nearly three years, the four-piece absolutely seared through an hour of material. There were still a great number of tracks from the debut album in the setlist, but these were stretched, tightened and generally buffed up to give more of a club feel than they ever did on record. The handful that featured from new album ‘Born Under Saturn’ were also suitably dancefloor-friendly, and the general feeling left after was one of a rave. A hot, sticky, but goofily fun rave, in Hawaiian shirts. (JK)

Pinkshinyultrablast, The Black Lion
Early doors on the final day, the Black Lion pub becomes an unlikely mecca for shoegazers old and new when Russia’s Pinkshinyultrablast turn up for an Alternative Escape set. They’re like Cocteau Twins on steroids, with a post punk rhythm section and Slowdivesque walls of reverb. The sound is sharp and fat, but is marred by some mic issues; it keeps cutting out like it’s been hooked up to a tremolo effect. We feel a bit sorry for the singer when she coyly appeals to the sound man. “It’s your pedals!” he shouts gruffly back. A bit rude, we reckon. To the uninitiated, their set could have sounded like one long song; to the already converted it was a highlight. (GR) 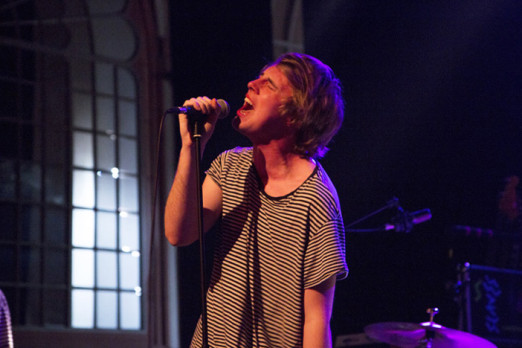 Girl Band, Corn Exchange
At the first of their two TGE shows, Girl Band had the benefit of the Corn Exchange’s impressively loud soundsystem behind them, which would’ve pleased anyone familiar with their squally patchwork of sound, and maybe scared the life out of anyone who wasn’t. Frontman Dara Kiely seemed irritable, brattish even, but it added to the sense of danger in the band’s set. Each of the four men on stage was lost in their own world – pounding drums, flailing and falling, slicing out great chunks of noise from their guitars – possibly even irrespective of one another. The songs switched, often halfway through, from panels of white noise to rhythmic sheets of corrugated guitar, and back again, with such force and volume that it felt like the wheels could come off at any point. Sadly though, they didn’t play the excellent ‘De Bom Bom’. (JK) 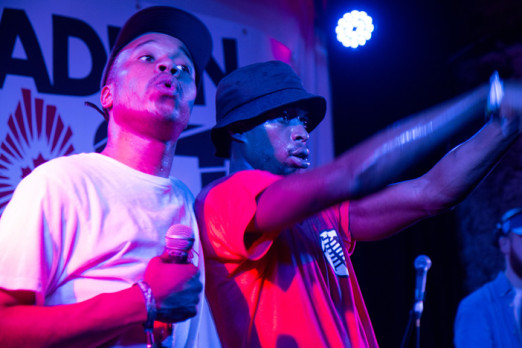 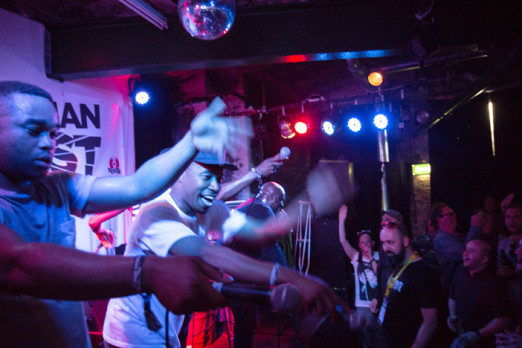 The Lytics, Green Door Store
The Lytics may be playing inside a sweaty Green Door Store at 3pm on a Saturday afternoon, but it feels more like 3am. The crowd are fully digging the vibes from the Canadian five-piece hip hop crew. With an old skool sound that would easily fit in with the GDS’ (in)famous hip hop night Donuts, The Lytics are all LA vibes with a refreshing lack of gangster and bling. The crew are clearly having a whale of a time and give a shoutout to a couple of audience members who they ended up hanging out with after their last show. “We’re gonna record y’all,” we’re told, “And send a video back home. Show the crowds there how it’s done, yo!” (AL) 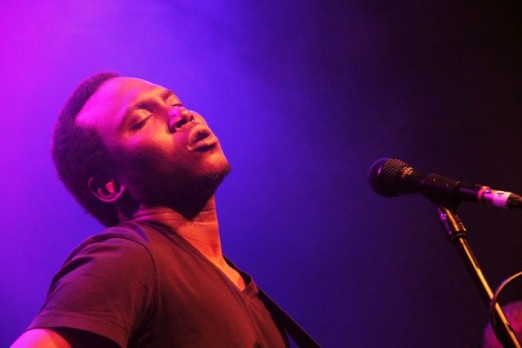 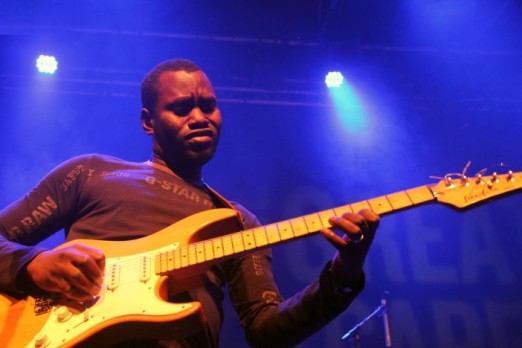 Songhoy Blues, Dome Pavilion Theatre
We came to this gig expecting raw African blues, which we got a-plenty. What we didn’t expect was the immense joy this band of exiles brought to the stage. Apparently music has been banned by radical Islamists in their home region so their pleasure in playing is real – and the enthusiasm of the packed Pavilion Theatre audience can only have added to the sense of celebration. Their music is bluesy for sure, like the White Stripes or Black Keys, but deeply rooted in African rhythms and song. Singer Aliou Toure made great play at dancing, and his smile and soul was infectious. Their album is great, but seeing this band live was the real deal. (JS) 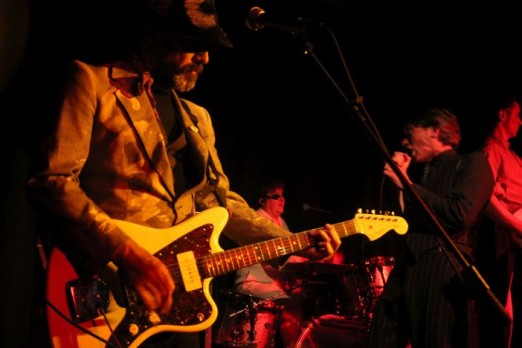 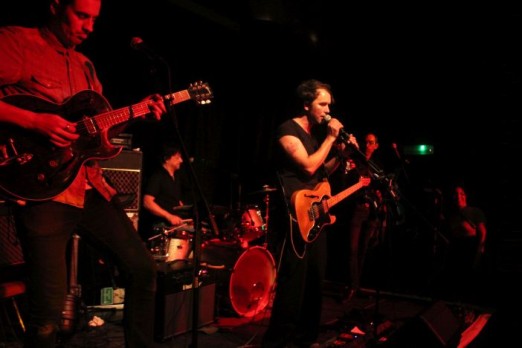 Mum Dad And The Kids / Clowwns, Rialto Theatre
Two of Brighton’s finest live acts shared a stage at a packed Rialto Theatre for an afternoon of intense, sweaty rock’n’roll. Mum Dad And The Kids, a powerhouse of a sexy swaggering mix of Big Star and Ziggy Stardust. Fronted by the dynamic Tim Harbridge, this band has a terrific array of songs and put on an excellent live show. Clowwns have an album ready to go, the impressively titled ‘The Artful Execution Of Macho Bimbo’, but for the last seven years they’ve been one of the finest live acts to grace a Brighton stage. Those in the know, know where to go and this gig was no exception. Clowwns finely-honed wave of electrifying garage-punk was pretty unmissable. (JS)

Bad Breeding, Corn Exchange
Bad Breeding are really jolly angry about something, possibly everything, and this anger manifested itself in a wayward disregard for the usual rules of stagecraft at the Corn Exhange. Sure, they played punky, loud and fast and shouted at all the right bits, but their bodies – wow – they moved wherever you didn’t want or expect them to. That could’ve been right up into your personal space, over the crash barrier, starting circle pits, or by shouting in your face. Then they were back on stage, lying on the floor or crouching at the back of the drum riser. Short, sharp and incendiary like four strobe lights, Bad Breeding’s show proved they deserve to be at the forefront of UK punk for a while. At least until they calm down. (JK)

Awesome Tapes From Africa, Dome Studio
Brian Shimkovitz took to re-releasing music from Africa on cassettes when he realised the joyous sounds weren’t getting heard outside of their region of origin. His tour as a DJ – yes, of cassettes – goes some way to redressing that balance too, and his performance at the Dome Studio on Saturday – a true “one in, one out” event, found him pressing pause and play once more, alternating between two top loading tape decks. Admittedly this didn’t allow for any mixing, but the applause between each song spoke volumes as to how much the audience were enjoying one last blow-out at what was, essentially, the last performance at TGE this year. (JK) 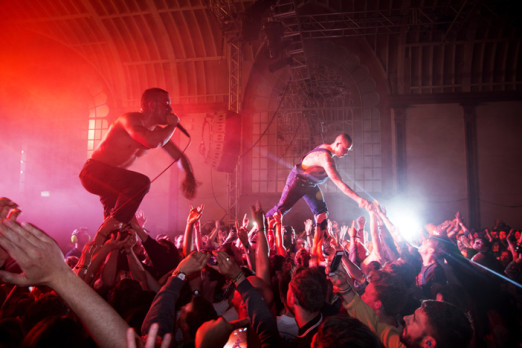 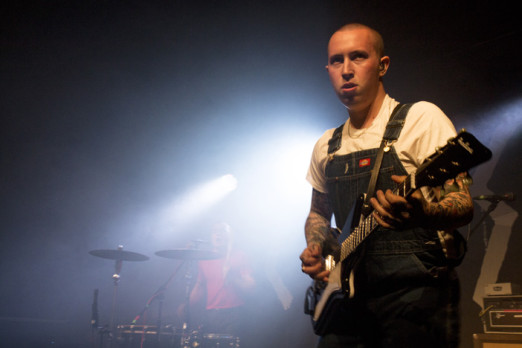 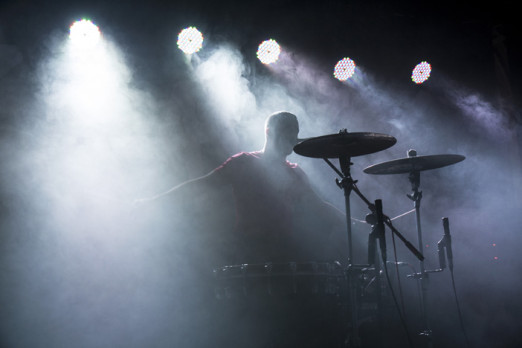 Slaves, Corn Exchange
Huge letters spelling S L A V E S are erected while we eagerly await one of the hardest working bands in Britain. Matching the grandiosity, Slaves thunder through a set mixing carnivalesque theatre with chaotic rock ‘n’ roll. Singer and drummer Isaac Hayes holds court perfectly in between songs, weaving comic street poetry reminiscent of early day Mike Singer. Guitarist Laurie Vincent dances around franticly looking like a long-lost cousin from the Texas Chainsaw Massacre while the two incite a riotous pit with highlight ‘Cheer Up London’. There is a crowd surfing man-shark in ‘Feed The Mantaray’ (surreal) and the duo finish in style stood ten feet atop a sea of hands while we’re left wild eyed and bewildered. (AB)

The SOURCE team covered all three days of The Great Escape 2015: check out our reviews from Thursday and Friday.

Sometimes an article is a bit of a team effort, and those are tagged SOURCE Writers. If you’d like to be part of that team, hit the Contact link at the top and get your work on this website.
← PREVIOUS POST
Poets And Rappers At It Again
NEXT POST →
The Great Escape 2015 Review (Fri)
Mailing List
Recent Posts
Website developed in Brighton by Infobo
Copyright © Brighton Source 2009-2021
The Great Escape Review (Sat) - Brighton Source