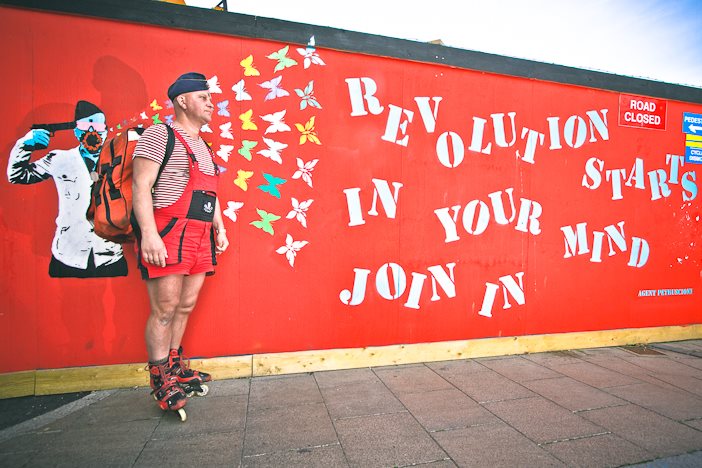 As the city’s street art takes a turn for the safe and accessible, SOURCE talks to wall artist Agente Petruscioni about politics, censorship, spray art and why Brighton is his home.

You came here fifteen years ago. Why did you stay?
Yes, I visited the city with friends on the way to New Zealand and just loved it. It was during the ‘Streets of Brighton’ (when performers used to roam the then town during the festival) and I started taking photographs. It’s my base now. I travel for projects, for example Berlin or Prague, but the people here are much more friendly. You can start a conversation about anything. In Berlin it is much more closed. You can be turned away because your clothes are unusual or for being English.

Haha, I think many British people will be surprised to hear us described as ‘friendly’. Where are you originally from and how do you think that has influenced the work that you do?
I grew up in communist Czechoslovakia and it was a very controlled regime. You were not allowed to wear this this or this, definitely no piercings, no dreadlocks – a very controlled environment. Now I was going to rebel. I got involved in the punk culture, went to a lot of punk gigs and so on and that was the first encounter with the counter culture and it made me think there was another way. Quite often you pay a heavy price. In those days you might get beaten up or arrested or end up in prison. 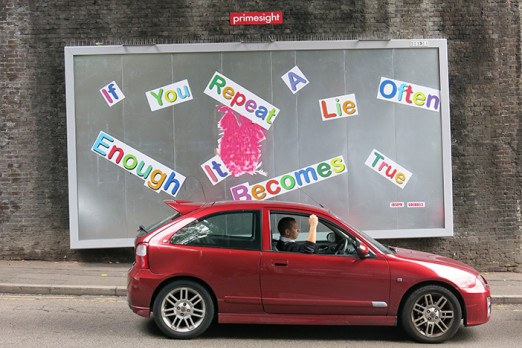 Your artwork has that ‘punk and positive’ vibe through it.
Oh, definitely from my experience of people I see it’s very easy to make dark gloomy art, but something that makes them laugh or make them think and cheat them a little bit. Some of the stuff I have done is quite political. The latest thing I’ve done is a big billboard with David Cameron which was about the tax evasion and the offshore things, but some is quite surreal.

At the moment I do a lot of stuff in the streets, but some of the stuff is based on my photo work. I’ll convert it to a stencil format from an image. For example the CND girl, that’s based on a photograph of my friend. I like to bring things to the streets and make people think a little bit more.

I think if you have got something to say you should say it. Everybody’s got something to say. I have done about four walls in Brighton with a big portrait of Martin Luther King – basically it is an interactive mural. It’s quite funny because a lot of people are scared to write something on the wall and basically I tweaked a sentence from Martin Luther King which says “I have a dream” and there is a sign saying write your dream on this wall. For me it’s very clear because it is a very iconic positive person, who stood for something and changed the way people think, made us think that things are possible to be done. 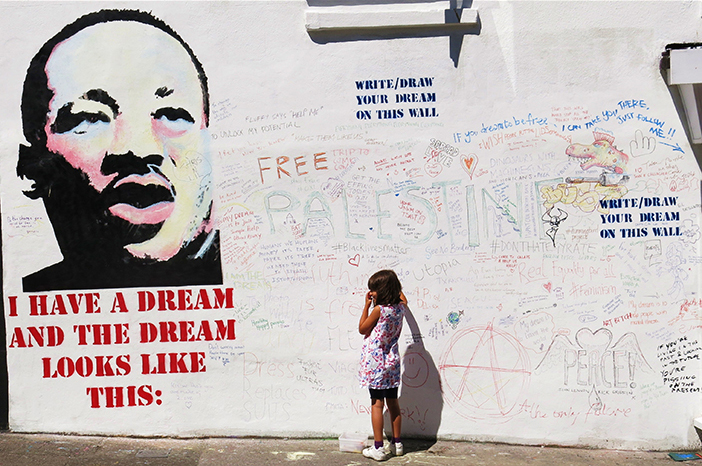 Brighton was one of the first places to allow street art (in the New England development) and now it has spread through the city. More and more murals are being commissioned. How does that sit with you?
My friend is doing a massive mural with shitloads of dogs everywhere for the festival and I was just thinking about that – I mean it is a job for him but I wouldn’t do it. But I respect him. It’s a bit lame – a wall full of dogs? Everybody loves dogs. It seems to be a little bit sanitised and obedient.

I made a piece recently about a little boy being watched by two CCTV cameras and one says GCHQ and one says NSA and it includes a quote “people shouldn’t fear the government, the government should fear the people”. It’s been there for about a month. I know the officer in charge of the graffiti removal for Brighton and Hove and he said they’ve had a complaint; apparently it is too political so we will have to take it down.

So they are drawing a line based on content?
Yea of course – it’s not dogs is it? You don’t want people to think. There is definitely censorship of political pieces. They sent somebody over and it was quite funny as they had just painted grey over the bits, so I went back the next day and wrote, “being censored makes me think I am doing something right”. 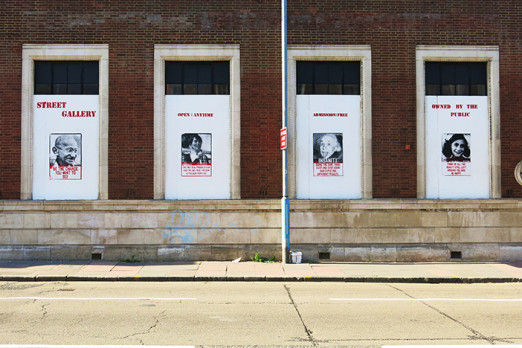 If you could be involved in making the next chapter for Brighton, what would you like to see?
I think a lot of people need to reclaim the space – we are constantly being bombarded by advertisement, being forced to buy things we don’t need. It just requires us to be a bit more open minded, we need to be thinking a little bit more about issues. For example every year there is a naked bike ride – and a lot of people say, ‘oh, it’s about exhibitionism’, but it’s not about that. It is about freedom. It is also about cycling reclaiming the streets: for at least once a year you feel things belong to people, it’s not ruled by corporations. It’s a very amazing feeling but it should be more. When I came here we used to go to a lot of free parties. We would go up on the downs with a sound system but now that doesn’t exist anymore. So the subculture, the people who are doing it, have retired to have families, and the young people have not picked up on it.

Even Pride has become massively corporatised. You just see all the big companies with floats, you know, EDF, Sainsburys, and it’s just boring as fuck. People have fought very hard for the freedoms we have now but it has become very superficial. It’s cool now to be gay and it’s about how you look and wearing expensive clothes.

The magic wand is us. It’s people like me and you who make the city and make a positive contribution. People worry about the corporate encroachment but I say just carry on, keep doing what you do.

How can people best experience your work?
Anybody can give me a hand with some projects. I might do some filming as well. If people are up for the photoshoots they should come and join in.

And what is coming up next for you?
Revolution. Revolution which starts in our mind.