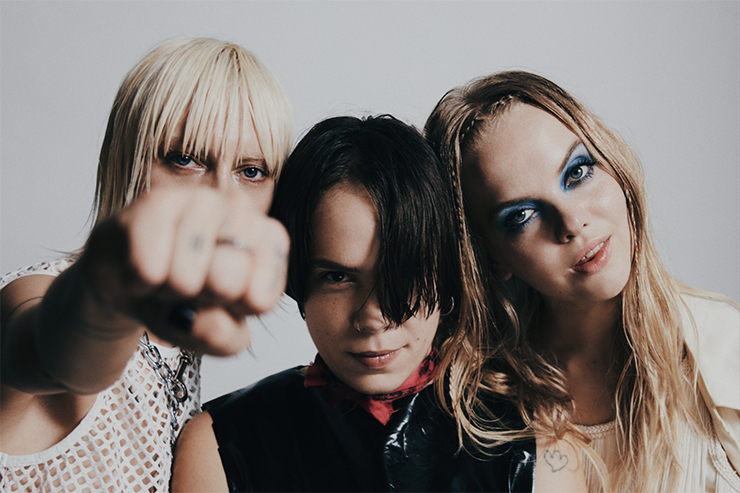 After releasing their second album ‘So When You Gonna…’ during the formidable first peak of the pandemic, Dream Wife have now embarked on a long-awaited UK tour. They’ve also found time speak to SOURCE, which is why I’m peering through a box-like window on a laptop that’s seen far better days, meticulously checking for visible remainders of this morning’s breakfast on my jumper. This is the all-too-familiar anxiety of the Zoom call, a ritual that only a post-pandemic society could have become accustomed to. Within a few moments Dream Wife’s Rakel Mjöll greets me with a view of a small, homespun practice space in London.

I’m eager to discuss all that’s on the horizon for Rakel and her bandmates, guitarist Alice Go and bass player Bella Podpadec, in the coming months. So I plunge straight in with questions about the tour, which is headed to Brighton where the punk rock/indie trio originally formed.

Rakel: “Our whole album is about our love for live music. It was weird releasing an album during a time when live music wasn’t an option. It’s really great to finally get to take these songs out on the road and see them come to life. This band is very much a live band, we completely thrive off and are inspired musically by a live show setting and the energy and the magic that happens. It inspires most of our music and how we approach creativity.”

As we talk, there’s an almost childlike sense of elation that cascades out of each response. The current tour seems like a cathartic transformation for the group after the perpetual uncertainty of the pandemic. It has been a heavy weight on many musicians, especially those who seek inspiration in the energy of live performance. The chance to reconnect and share their new songs with a live audience was a long time coming, with the band first returning to festival stages last summer.

Rakel: “It was a huge contrast to our debut album where the first year we played 120 shows, and 155 the year after. We were consistently in a van or at an airport and just playing these shows, often not even realising what city we were in, but that was the beauty of it all. We’re not really a band that can go to a cabin for a month and write a rock album, it’s a lot better for us being inspired by people.” 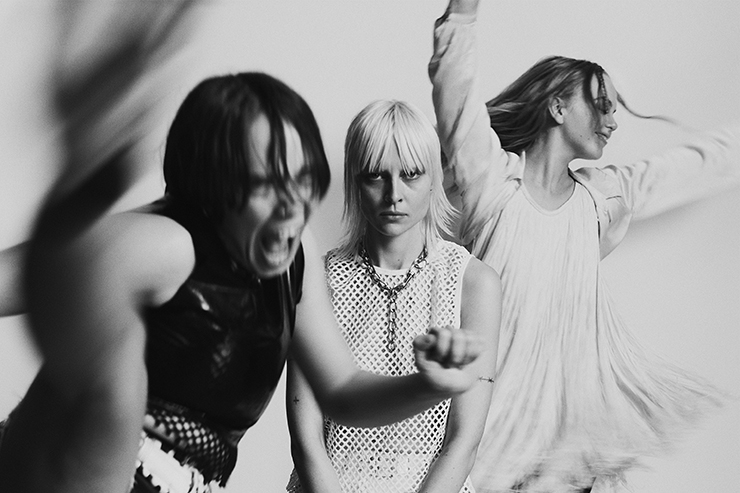 Despite the postponed tour, ‘So When You Gonna…’ reached #18 in the UK Album Chart and was named one of Rough Trade’s Top 10 Albums of 2020. The record, which was produced by an all female/non-binary engineering team, was flawlessly mixed and produced by Italian record producer Marta Salogni.

Rakel: “We chose Marta because she was simply the best. We were thrilled to work with her. We had the studio for a month and it was such a beautiful time we spent together, it felt really safe which is important when you’re creating something. It’s nice to be able to feel vulnerable whilst also being loud, and to work with people that make you excited to show up. We hired Grace Banks as the engineer and the tracks were mastered by Heather Kedgeree in New York. All these people were incredibly talented in their own fields and we felt so honoured and blessed to work with them.”

“It’s also just really important to practice what you preach, and we speak a lot about visibility. But it’s one thing talking about it and it’s another doing it. I mean hiring people that you believe in and speaking openly about how only 3-4% of western albums currently being produced have a non-binary or female producer on it. That’s such a small number and I think it’s really important to highlight that this is something that really needs to change. It’s no different to how consumers want to change things, like where you buy, where you shop, it’s the same with how you make albums. It’s about how you can contribute to these changes as well.”

Several of the tracks on the album tackle themes deep-rooted in controversy. Some, such as miscarriage, abortion and gender equality, are difficult for many communities internationally to speak about. Listening back to tracks old and new, it seems Dream Wife adopt a visual style of storytelling within their lyricism. Songs such as ‘Act My Age’ and ‘Validation’ feel almost torn out of the page of a diary. There’s a dual sense of participation and voyeurism, of observing a situation and being immersed in it – as though experiencing it together, on a different timeline.

Rakel: “So many of these songs take you on a journey musically and lyrically. There’s a new song we’ve been writing recently that really takes on this kind of element. My Grandma remains an absolutely brilliant storyteller, when you come over to hers for lunch she just completely reels you in with these stories, and I know all these stories so I can add to them too when she forgets parts. And that’s the beauty of storytelling, it’s such a vital thing because to connect as humans it’s so often through our storytelling.”

Rakel: “When we were writing the album, the song ‘Temporary’ was written about a friend of ours who was going through multiple miscarriages. We had this song ready but the lyrics weren’t there. It just takes one conversation with a friend and then you realise what the song is actually about. I like it when songs come together in that way. So much of it is that you write what you see or what you know. ‘Temporary’ really was prayer for us – it was written at a time when our friend was quite pregnant and wasn’t sure if this baby would make it into the world. It was the importance of speaking about it too, as there’s so little spoken openly about miscarriages, you often just feel so alone. You just write what’s happening around you.”

Only in recent days news broke that women’s access to home abortion care was to be rescinded by the UK government, after changes were brought in during the pandemic to make abortions more accessible. This made the need for the current conversation even more pressing, and hit home the importance of Rakel’s messages on vulnerability. Many of us have felt so isolated over the last two years, so it’s easy to see why there’s a desire to build a sense of community around these issues. This sense of sharing experiences applies both to Rakel’s words and the scene the band has built around it.

Rakel: “I think it’s so important when it comes to lyrics to just be honest, about what’s going on in your world at this moment. The song ‘After The Rain’ is literally a phone conversation between me and my sister who was choosing whether she should have an abortion or not. It was around the same time that Alabama had put really strict laws out on abortion. There were protests happening and so much anger around not being able to decide what you want for your body, and whether you want to become a mother or not. Part of that track was about being vulnerable, but being angry – which is a very important thing when it comes to reproductive rights and gender equality. With our songs we’re giving space for people wanting to be heard.” 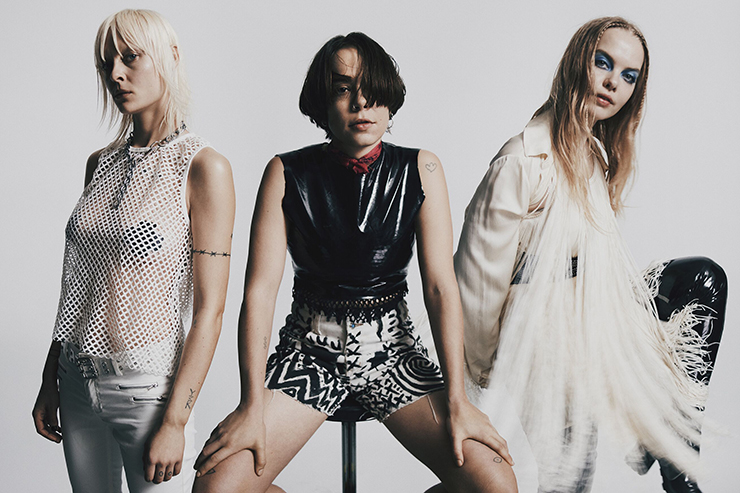 Rakel also touched briefly on the band’s future plans before ending with a few flashbacks to uni days and almost falling through the floor of a Brighton house party, which for Brighton at least, is usually the sign of a pretty good night.

Rakel: “We’re writing a new album and I guess we’re close to finishing it, which is exciting for us. There’s a lot of good tracks, but it’s always sad when you have to start axing them down. It’s exciting for us to play a few of our new songs on the tour and see how they sound, and that will influence us further in writing. I think it’s a really healthy way of trying out songs in front of an audience, performing demos and new ideas in front of a live audience. Whether they end up on the album or not, it’s quite a fun thing for us because we see what songs really work by what the reaction to them is.”

“It’s just really nice to be in a space where we’re writing songs and playing shows again, and having that live show energy be a part of our lives again. It’s a lot of fun to go back to Brighton as we all met there. Forming Dream Wife was sort of a way to rebel against our studies, because it’s funny studying art in general, so making Dream Wife was kind of a way to really just have fun outside of university. We were never really part of the Brighton music scene, we were just playing house parties and drag bars, it was fun. Then we moved to London, and got a record deal, but Brighton has a very special place in our hearts as that’s where we met and played our first shows. There was even one show where we thought the floor would definitely break during a house party and we just thinking ‘Is this the end?’ Luckily for now it wasn’t!”