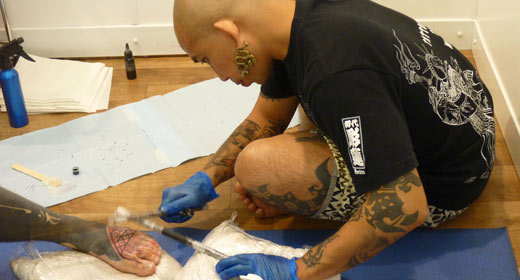 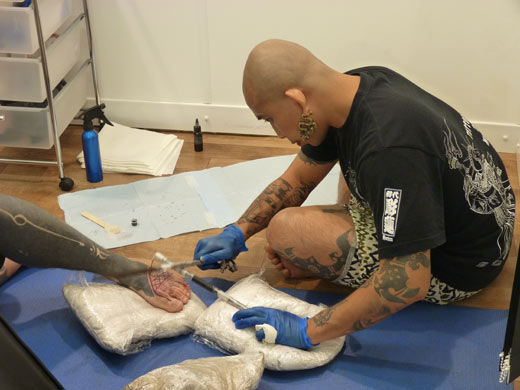 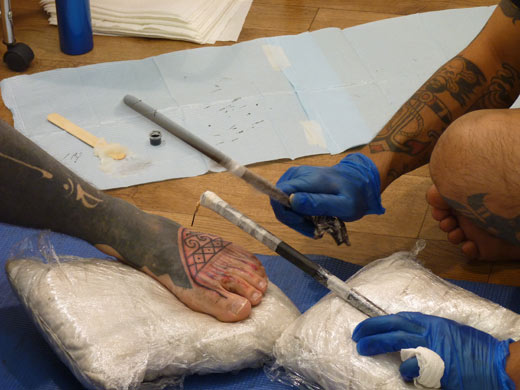 Jeremy Lo is renowned in the tattoo world for his unique ‘hand-tapping’ method that is ingrained into the culture of his homeland. The technique involves two sticks, one with a needle on the end, while the other is tapped against the back of it to pierce the skin, kind of like a mini chisel and mallet. Traditional hand-tapping tattoos go back centuries and are an important part of Bornean culture, signifying Rites of Passage and a connection to the natural world.

“Each symbolises each stage of life. The eggplant flower is the first to do and is for the first time a young man leaves the village. It starts as a flower and if the person reaches the next stage then it grows into animals like a scorpion, dragon, then monkey. It grows like a tree, from what you see in nature, like a tree of life,” says Jeremy.
“In Borneo if you do not get a tattoo then you are not a man. The first one you get is usually on the shoulder so that if you are killed the first time you leave the village then in the other world as you approach the river in the afterlife, if the river god cannot see tattoos he will shake the log as you try to cross because he can see that you are not one of us.”
There are some places he will not tattoo though; “I never tattoo on peoples palms or on the back of the hand, that means you have blood on your hands.”

His guest appearance in Lewes lasted from 12th September to the 19th and proved very popular with enthusiasts and newcomers alike. Jeremy is from Sarawak, the birth-place of traditional tribal tattoos, and has been honing his craft from the age of 16, appearing at conventions and workshops around the world, from the beaches of Thailand to the streets of Amsterdam.

Resident artist at Tizzs, Fade FX, said: “It’s a very ancient method of tattooing, from before electricity, it’s old, organic and a big part if the culture. Jeremy attracted a lot of interest because he’s international and not many artists from Borneo travel this far.”

The whole process is very different to what is considered normal tattooing in Britain; first of all everyone in the room has to take their shoes off, scented candles and incense are placed everywhere with soothing sape music (a four-stringed guitar-like instrument) plays in the background.
“The sape is calming, relaxing for the person, sometimes I even tap to the rhythm of the music,” Jeremy added.
It takes much longer to complete but those that have had both machine tattoos and hand-tapped ones say the experience is much more pleasurable, with less pain, quicker healing time and no peeling or redness on the skin afterwards.
“It [hand-tapping] feels more gentle as it drags less and doesn’t churn up the skin. Traditionally sometimes magical ink is put in the tattoo from a Sharman ritual in order to gain the power of an animal, like a scorpion or dragon.”

Some of the old ways have had to be adapted to modern hygiene regulations. In the past needles would have been re-used and the ink would have come from less than sanitary sources.

“Originally the ink was made from burnt carbon from cooking at the bottom of the pot, it was then scrapped out and mixed with glucose sugar. The problem was it’s not hygienic, they didn’t know how people’s skin would react to that. Now we use disposable needles and inks,” said Jeremy.
This method is not restricted to just traditional tribal tattoos, it can also be used for designs that are more familiar to western customers….but where’s the fun in that?

To see more of Jeremy Lo’s work go to www.myspace.com/monkey_tattoo and www.tizzs.com to find out more about the shop.