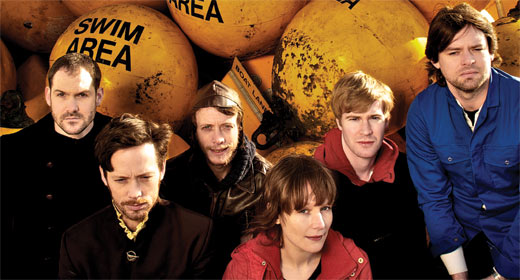 An air of suspense fills the main room of Concorde 2 in anticipation of BSP’s performance. We dutifully look toward the empty stage, all of us silent, hearing foreboding white noise coming through the speakers. Soon enough the band emerge, kicking things off with ‘Who’s In Control’, the powerful opening track from new album Valhalla Dancehall. I already know I’m going to enjoy the show as soon as lead singer Yan shouts, ‘Sometimes, I wish, protesting was sexy on a Saturday niiiiiight’.

Other songs selected from the latest record are ‘We Are Sound’, ‘Living Is So Easy’ and ‘Observe The Skies’. These nicely litter a set of some of their best oldies and rarities including ‘Fear of Drowning’, ‘Salty Water’ (played by special request), ‘It Ended On An Oily Stage’ and the raucous ‘Remember Me’.

Yan’s breathy, husky voice together with the way he crouches and jumps around on stage make his an enigmatic presence, and I see a shoegaze version of Jarvis Cocker. I love the moment he throws his guitar into the air with enormous and unusual care, before bending his knees pensively to catch it again. The band are very well received and deservedly so; they play comfortably and with prowess. Any fears that this might be their last public appearance for a while, due to references to ‘the final leg of their final tour’ made last week, are mislaid when Yan and Noble jointly announce a monthly club night in Brighton beginning on January 6th.

The song ‘Bear’ is a big highlight for me, performed with beautiful control and screaming absolute perfection. A wistfully atmospheric acoustic calm was created in ‘Moley & Me’, and particularly admirable was the breathtaking execution of both ‘North Hanging Rock’ and ‘The Great Skua’.

What I find so striking about BSP is the sheer range of their musical capability. The six members hit us with a brazen garage-esque wall of sound one minute, downhearted post-punk solemnity the next and, with yet another string to their bow, the unashamed poppiness of ‘Waving Flags’ the next. With four solid studio albums to date, it’s difficult to see why they haven’t climbed the heights of fame that so many of their peers have. Originality and modesty perhaps; their confidence is quiet and their music their own.

The band end their homecoming gig with a magnificent four-song encore, finishing with ‘All In It’. In the aftermath, I tell myself I have to see them again as soon as possible.

Sometimes an article is a bit of a team effort, and those are tagged SOURCE Writers. If you’d like to be part of that team, hit the Contact link at the top and get your work on this website.
← PREVIOUS POST
Interview: Jeremy Lo
NEXT POST →
Patrick Wolf Review
Mailing List
Recent Posts
Website developed in Brighton by Infobo
Copyright © Brighton Source 2009-2020
Review: British Sea Power - Brighton Source