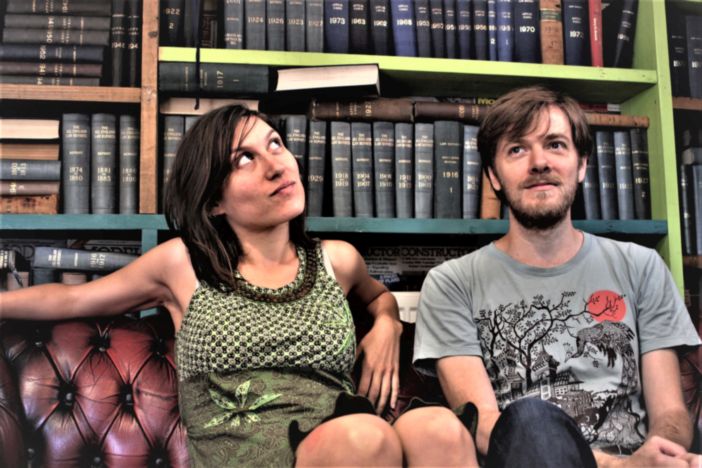 Greenness are a Brighton-based Anglo-French indie duo and Brighton Source is honoured to present the world premiere of their new video for ‘Dance with the Light’, the lead track from their new EP ‘Cyclicity’. (see below)

Greenness met in Manchester eight years ago – Cess was studying at University, Graham was playing in indie bands – and they began making music together almost immediately, although it wasn’t until later that they started writing their own songs.

We spoke to Cess and Graham ahead of the launch of their EP.

Cess: “We were a bit shy initially. It was only when we moved to Brighton in 2013 that we started performing and recording. As soon as we arrived, there was music everywhere, people busking, open mics… And as soon as we started playing open mics we were offered shows.”

The name ‘Greenness’ appeared early on, before they had even started performing. “I thought it would be great to combine our names, Graham and Cess, and green is my favourite colour. It felt very natural.”

The sound of the band has been developing since their first EP and the new one has more of an edge, less-folkiness now.

Graham agrees: “Yes, the guitar is more indie. The first EP had more of a gentle sound, but on the new one I’ve gone back to electric guitar.”

Although a two-piece, at their launch party for the new EP they’re going to play with an expanded line-up incorporating members of the two support acts, The Case of Us and Yazmyn Hendrix. Cess explains that “everybody is going to play their own set but at the end it will be this sort of super-band with everyone playing on our new songs.”

‘Dance with the Light’ was written when the couple were living in Strasbourg. “The song came to me after a dream,” Cess says. “That’s what the song is about. Having really intense dreams and waking up and not wanting to forget them.”

The video for ‘Dance with the Light’ was filmed in Queens Park, but the band wanted to make it appear like a really wild place. Cess explains:

“I’m not really spiritual but life can be bleak sometimes and when you have a really surreal dream with loads of crazy things happening, when you wake up it reminds you that there is still some magic even if life feels mundane.”

Graham: “It’s also like a summoning thing, gathering in the dark around a fire, an ancient tribal thing.”

Cess: “We’ve got the four elements in there as well – the wind in the trees, fire jugglers, shots of the water, earth – and it has a really wild feel.”

The songs on the EP each represent the four elements.

“It’s also quite nostalgic for me too because when I was a teenager growing up in the suburbs of Paris there was not much to do, so we would just go to the forest and light a fire and dance around it and have a party. I have magical memories of that. And I was studying English literature at the time and I got really into the classics, Alice in Wonderland, a Midsummer Night’s Dream, so we put references to those in the video too.”

The first song on the new EP is called ‘Swimming’. It starts out light and folky, but at the end of the song Cess’s vocals explode.

“That song kind of marks a transition between the first EP and the second. The vocals start out quite sweet and then they get fierce.

“With the first EP I was still trying to find myself. I wanted to sing more confidently on the new one, come out of my shell and explore my limits.

“My favourite singer has always been Bjork” (Ed: Cess played a Bjork tribute night recently) “and there are songs where she is almost whispering and subtle and then in other songs, sometimes even in the same song, she’ll be shouting and screaming and doing such interesting things with her voice. I wanted to do the same in ‘Swimming’. I wanted to have all those different things in the same song, to stretch my range, try different styles and experiment.”

“My first singing lessons as a teenager were in jazz singing and I played piano, I was in jazz bands when I was 18, so that was a big influence. You can still hear that here and there.” Brighton Source thinks there is also a Tim Buckley element, particularly his Starsailor album, with its melding of jazz and rock and folk. “Well I guess my background is in jazz and Graham’s is in rock, so it comes together in a similar way.”

The second song is ‘Moon song’. “It’s a song I use to express my frustration and it’s a great song to sing, the vocals are really crazy and it’s really therapeutic. The idea of reaching for the moon, of trying to reach another level, you can see it but it seems so inaccessible.”

“Of course, there’s also the imagery of the moon, representing feminine cycles and mood swings and that’s also in the song, those extreme emotions. That’s also expressed in the music, with elements of dissonance, to create a tension, like the moon’s gravitational pull.”

Graham: “It’s like a howl at the end of the song, howling at the moon.” 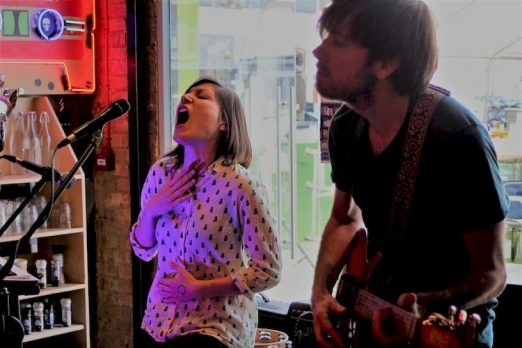 “It’s about mother earth of course. We bought a synth that year and wrote the song on that. The lyrics had been around for a lot longer. ”

“We like to be pro-active, if there’s a problem we want to find a solution. So we were trying to have a greener lifestyle, trying really hard to understand what was going on with the environment, how to change our lifestyle to have a less negative impact.”

Graham: “Arranging that one for me was hard… I was going crazy for months!”

Cess: “I was feeling pessimistic about the future of the planet but if you have a tendency to feel depressed and you are bombarded with negative information it just makes it worse and it’s really hard to be positive when everything is telling you we are doomed.”

Graham: “…but it really feels like a good way to address it, to have a song like that and to perform it and get out all those nagging feelings that you can’t express in other ways.”

Cess laughs: “If you can’t save the world at least you can turn it into a nice song instead!”

“There’s only so much we can do as artists. I wanted to do something about the environment but I didn’t want to preach, I just wanted to put some compassion and forgiveness out there, for myself and everybody else. The song is saying it’s hard, I get it, we’re just humans, everybody has their own things going on and nobody is 100% functional all of the time. When you feel depressed you can hardly take care of yourself so how are you going to take on looking after the world, this monumental task of sorting out the human mess?”

“The song just says ‘it’s OK, I get it, we’re not perfect as a species, it’s difficult enough to look after ourselves, but we should try

…and then it goes all cosmic !”

Greenness and friends launch the new EP ‘Cyclicity’ at the Hope & Ruin on Saturday 18th August. Tickets online or from the usual places.

(Interview and photographs by Jon Southcoasting)

Jon Southcoasting photographs all sorts, including music, writes about things, as often as not musical, and sometimes plays his own songs too. He lives in Brighton.
← PREVIOUS POST
KitFest, Saturday 15th September
NEXT POST →
Amadou and Mariam Review