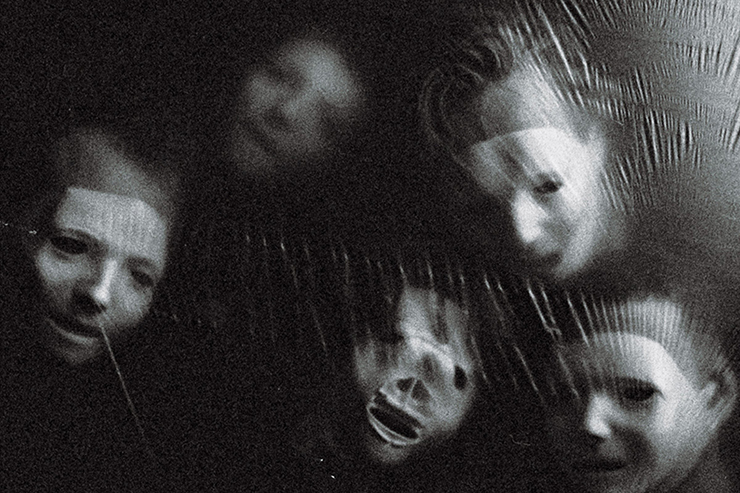 The return of live gigs has unleashed a tide of local releases, presumably a backlog held in reserve for just this moment. Here are some of the best. This round-up of new music includes singles from ELLiS·D, Dog of Man, Hutch, XOXO and Diner, as well as an EP from Libra Libra, another Rose Hill compilation and an anniversary reissue of a Quantic & Alice Russell classic. We’ve also been listening to new albums from The Family Grave, Oddfellow’s Casino, Oli Spleen and DITZ.

He’s known among the Brighton alt-rock scene as one of the city’s most creative drummers. But, naively, we didn’t realise the covert psychedelic wordplay in ELLiS·D’s name until he said it to us out loud. This new solo single sees him drifting down the motorik motorway with an epic, post-punk banger that makes a surprise stop at the services a third of the way through before jangling, full-throttle, back onto the slip road. This’ll appeal to fans of Squid (and that’s a lot of fans these days). Look out for him at the Great Escape in May. (GR)

We last saw Dog of Man headlining the Equinox Sundae at the Green Door in March. Their skin-tight set featured some excellent new material, including this single, ‘Hello MI5!’. It’s about their fave topic of paranoid conspiracies and, in a bid to cement their reputation as the Duran Duran of accordion-led psych-punk, it’s accompanied by an expensive-looking film noir video — with acting and a plot! Heckle them from afar at the Albert on April 7th and invade their personal space at the video launch party on Friday 29th April at the Hope & Ruin. (GR)

A refreshing addition to the local gig scene for the past year, Hutch’s flowing Laurel Canyon vibes and sweet harmonies pay homage to the Trafalgar Street heating retailer with a single that just oozes warmth and joy. This live favourite is further enhanced by the angelic sound of Eva Lunny’s harp as the pace slows to a dreamy fade. They’ve taken the late 60s soft rock/psychedelic feel and made it into their own Sunshine Pop sound. Buy this, then go to their gigs (starting with a launch party at the Pipeline on April 21st) to soak up the sound of Summer. (SC)

With an oh so intriguing band name (to avoid confusion pronounced eks-oh-eks-oh), this recently formed Brighton-based indie pop band have just launched their second single ‘My New Habit’. Finely crafted and catchy, it’s a song which showcases the band’s raw energy and impactful ability to deliver a vibe akin to Coldplay yet skilfully produced on a self-release budget. Frontman and songwriter Vid delivers punchy vocals, soulfully rapping out an endearingly honest tale of tiptoeing around a new relationship. As the musical layers build, the hooky melody holds court culminating in a manically rousing guitar solo which ignites the track. An accomplished offering, this release deserves to earn the band a wider audience when they hit the road in May. (AJ)

Diner
‘Yours’
Diner are not background listening. Hitching their intriguing songs to those infectious kosmische beats, wiring a lo-fi 80s electronic edginess to some dark Twin Peaks reverberations then connecting with a pop sensibility for hooks and highlights, this Brighton duo create a soundtrack that grabs attention. You may have already dipped into their steady single stream – the elevating melodies of ‘Arm The Ridge’, the shadowy work-song ‘Stay Down’ or the tense Robert Rental tinged ‘Glue, Love’. Now comes ‘Yours’, a final preview for Diner’s forthcoming album ‘Fold’ (due for vinyl release 26th April). A break-up story delivered with weary resignation that twitches to a tense rhythm and eerie circus-ring synth lines, ‘Yours’ compresses atmosphere and impact with the same deceptive song-craft of Wire or Swell Maps. It may be surreal and slightly unsettling, but this Diner’s music demands frequent re-visits. (JP)

Libra Libra
‘Modern Millennial’
SOURCE favourites Libra Libra are back with a bang with their ‘Modern Milennial’ EP. These five tracks mix a punk ethos with garage guitars, driving synths and enough theatrical tongue-in-cheek charm to make you feel like you’ve just downed a bag of Skittles. ‘Candy Mountain’ is a rollercoaster of a tune that YYYs and The Kills would be proud of, while ‘Here’s To You Mr. Robinson’ takes a well aimed swipe at a right-wing oxygen thief. ‘Moonbeam’ is undoubtedly the real earworm of the lot – its infectious, soaring chorus beautifully juxtaposing the tender message about the magnifying effect that social media can have on your mental health. ‘Fancy Car’ is a straight-up garage-punk beast that mirrors the energy and hype of their live shows, while ‘Alchemy’ is more nuanced, showcasing Beth Cannon’s truly incredible vocal range. The perfect soothing comedown tune to mellow you out from that Skittle rush. (AL)

The Family Grave
‘Mr Train Driver’
Brainchild of Brighton-based Americana storyteller Jon Southcoasting, this single from the newly released ‘Happy Songs’ album races along at a delightful pace – 2:39 minutes of pure infectious 60s psychedelia mixed with rootsy rock. The uplifting, unstoppable beat accompanies the listener right to the end of the track, which affectionately and poignantly pays homage to these key workers. The retro vibe is completed by an atmospheric video shot in Super 8 style by former SOURCE honcho James Kendall. It’s the perfect step up to the album itself: an eclectic collection of refreshingly different, thought-provoking songs. From the hauntingly mesmerising vocals on the title track ‘A Happy Song’, to the thrashing bluesy guitar riffs of ‘I’d Follow The Sun’, passengers should jump on board for a unique musical and soul searching trip. (AJ)

Quantic & Alice Russell
‘Look Around The Corner’ (10th anniversary reissue)
Like a fine wine this album has aged superbly and matured into a timeless classic. The shimmering title track is a blissful introduction that embraces Charles Stepney’s 60s arrangements for Rotary Connection and the use of strings throughout the album is exquisite, as is the Colombian rhythms of Combo Barbaro ensemble that provides the backbone of each song. There’s classic boogaloo, Latin soul and a pair of beautiful instrumentals, but it’s Russell’s voice that shines a light over the whole album. It’s exotic, soulful and remains pretty much a perfect listen. (SC)

Live At The Rose Hill #2

The Rose Hill, arts-hub, performance space, recording studio and watering hole just off the London Road, may host a gig list from the edges of the soundscape, but it’s a place where magic can be found drifting through the old tavern’s snugs. To capture and celebrate some of that vibe, the crew have been excavating their archives for a series of ‘Live At The Rose Hill’ digi-releases with volume #2 now ready and waiting on the usual platforms, and another due in May. This second instalment features: post punk jazzers ChopChop with a slap of super bumping agit-funk; Saidi Kanda X Pouya Ehsaei rewiring mbira, voice, mod synths and electronics to generate serious floor-filling energy; indie-electro duo Prince Vaseline driving their propulsive synth riff minimalism to the limit; and Comb plunging deep into a glistening stratosphere of electronica. Most poignant of all, some six months before his untimely passing, Bubu music pioneer Janka Nabay and his band deliver an unforgettable rush of vibrant afro-dance elevation. So possibly some of the best music you’ve maybe never heard before… just like a night at The Rose Hill. (JP)

The ninth studio album from Oddfellow’s Casino is a collection of rich, atmospheric songs based around subversive historical stories such as the Greenham Common protests and the mass trespass of Kinder Scout in 1932. Singer David Bramwell calls it “an album of pathways, marching feet, burials and the passing of time.” There’s a song dedicated to his father and another to Brighton comedian Dave Mounfield, both of whom sadly passed away recently. If there’s an elegiac tone to these songs, there’s also a sense of warmth that emerges from the layered instrumentation. The swirling synths, gorgeous sound effects and stately tempos all help to cast a dream-like spell over songs that sit somewhere between alt-folk and psychedelic pop. Above all, ‘Prince Of The Starry Wheel’ gives the impression of an open-ended journey where what’s important isn’t the destination, but the scenery. (BB)

Oli Spleen showcased songs from ‘Still Life’ at a sold-out launch gig at the Hope & Ruin last month. Curiously, he says that this, his fifth studio album, will be his final release. As before, the singer has collaborated with some top local musicians, including Nick Hudson and Stuart Warwick, while the input of Birdeatsbaby’s Mishkin Fitzgerald is evident throughout. However, whereas previous recordings saw Spleen battling personal demons, those themes now sit alongside wider issues such as the refugee and climate crises. With a front cover depicting a plastic-riddled albatross corpse, the album is upfront and earnest in its demand for a better world, and there are some deft lyrical touches. The title track makes for a surprisingly upbeat ending, with Spleen picturing his life as a work of art in a piano-led ballad that rises with all the drama of Sinatra’s ‘My Way’. “To preserve a frozen moment, to remember, not forget,” he sings. “In a riot of raging colour, with the paint still wild and wet.” (BB)

After forming at the tail end of 2015, DITZ have morphed from an unusual hardcore band into pioneers of their own peculiar sound. Their debut album, released last month, is an epic offering full of weird sonic textures, fine-tuned theatrics and barely sublimated rage. The long-awaited release of ‘The Great Regression’ is mirrored in the songs themselves. The strangely static intro to ‘Three’ takes twenty seconds before it even changes chord. When the song later erupts into a huge version of the same riff, it almost immediately pulls back with a few bars of what sounds like a piece of industrial machinery powering up. This give-and-take is typical of the band’s densely structured songwriting: the delayed drive towards gratification is almost punishing, but all the more rewarding for not taking the expected route. Suffice to say, it’s not an easy listen. But once hooked, the insane attention to detail will reel you back for more. (BB)

Sometimes an article is a bit of a team effort, and those are tagged SOURCE Writers. If you’d like to be part of that team, hit the Contact link at the top and get your work on this website.
← PREVIOUS POST
Joan As Police Woman Review
NEXT POST →
Reach for the Lasers