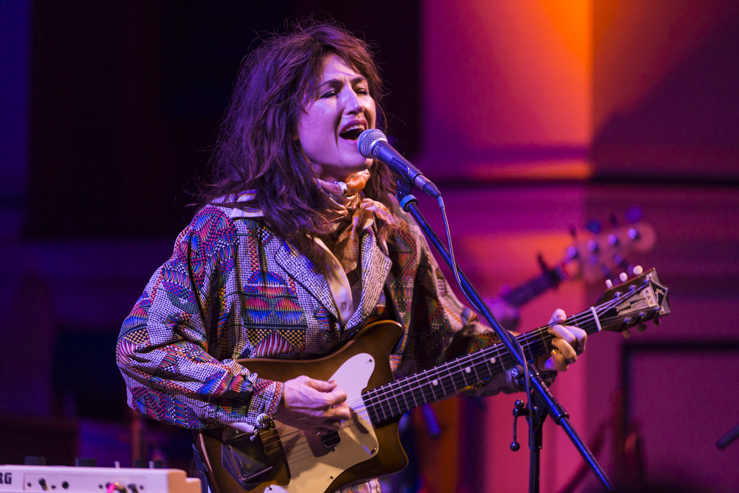 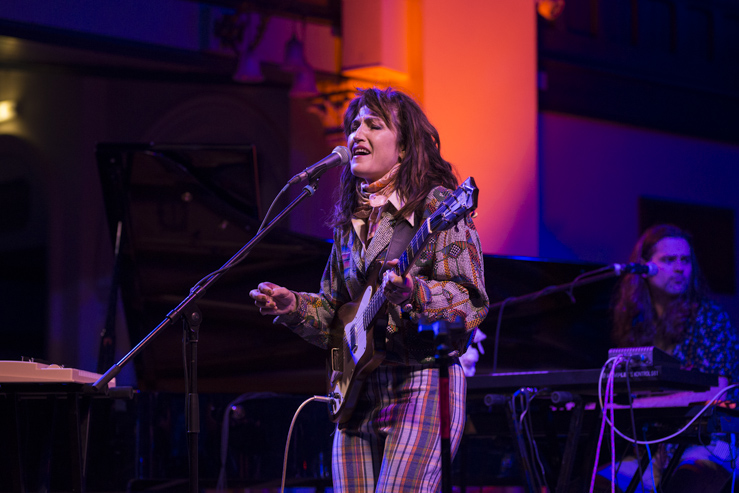 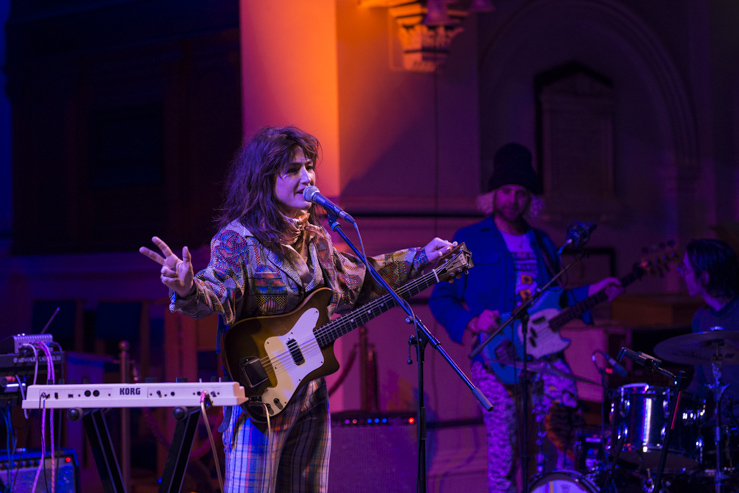 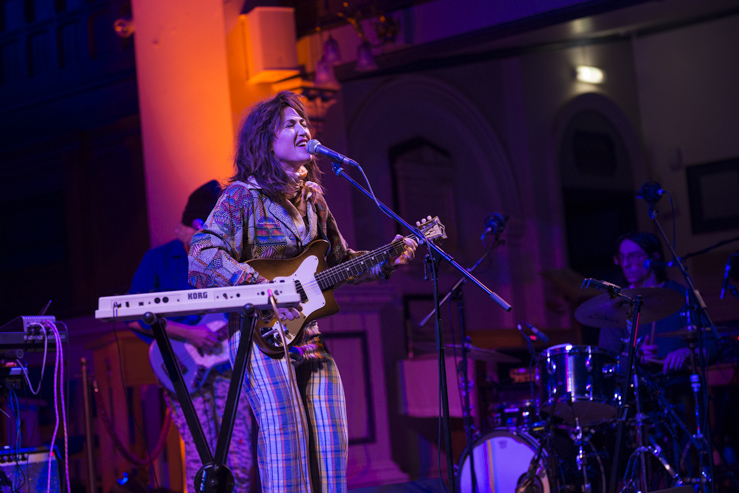 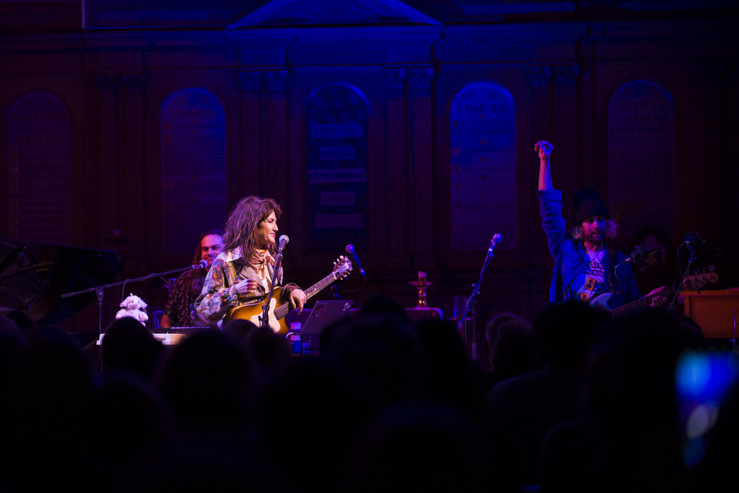 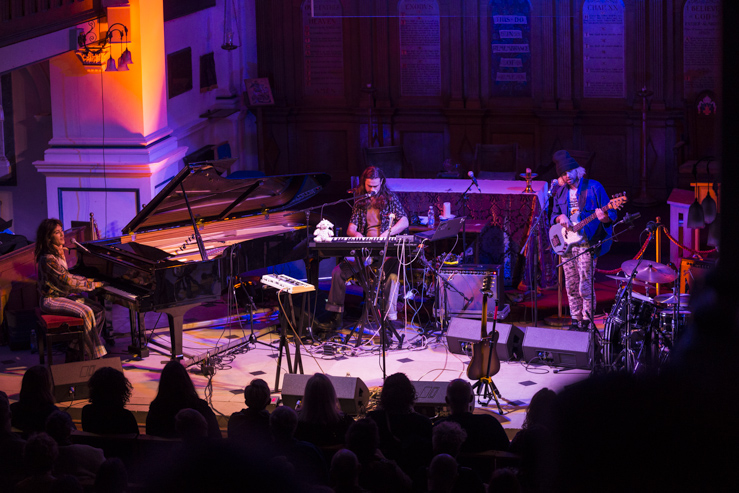 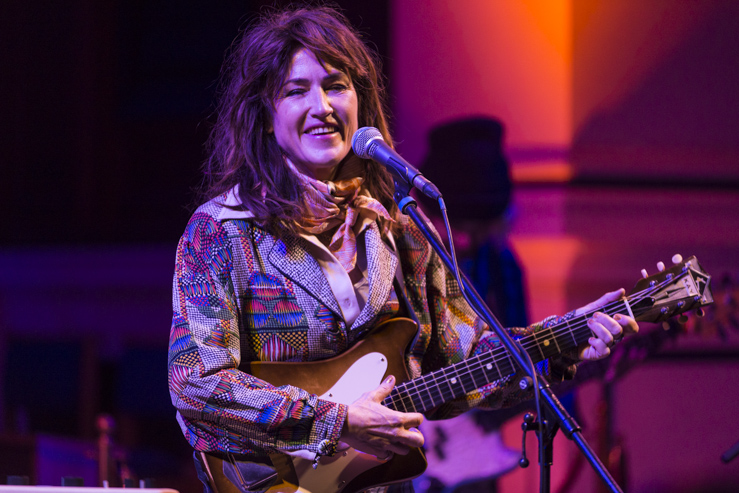 Quite possibly the coolest woman in music, Joan Wasser, aka Joan As Police Woman, was back in Brighton for her postponed show at St George’s Church. We last featured her at the ‘Let It Be You’ show at The Haunt with fellow Brooklyn artist Benjamin Lazar Davis, back in 2016, and he was back again with her band.

Joan Wasser’s sultry and soulful vocals transcend genres, unsurprisingly considering her list of previous collaborations – Anohni (formerly Antony and the Johnsons), Rufus Wainwright, Lou Reed, Aldous Harding, Sufjan Stevens and Damon Albarn to name but a few. Her most recent collaboration was with The Invisible’s Dave Okumu and “the late, great, Tony Allen” who was famed for being part of Fela Kuti’s Africa ’70 band. The result was her latest studio album ‘The Solution Is Restless’, released Nov 2021.

Tonight’s show featured a full band which, compared to her last appearance at St George’s church in 2019 for her stripped-back ‘Joanthology’ tour, was a welcome and uplifting return. She described it as a “two-part jazz brunch” and the evening navigated perfectly between the soulful ‘Geometry Of You’, ‘The Magic’ and her and BLD’s title track ‘Let It Be You’.

After playing several tracks from the latest album in the early part of the set, the singer said “we’re all still alive, isn’t that cool?” – hinting at her long-awaited lockdown-delayed return. Not that Wasser has been idle. The set saw her delve into songs from her latest covers album, ‘Cover Two’, also released during lockdown. Since the 2009 release of ‘Cover’, her covers collections have gone from part-experimental, to part-soulful, bringing to the forefront her love and appreciation for such an eclectic range of world music.

The night closed out with a slow cover of Michael McDonald’s funk classic track ‘I Keep Forgettin’. We will not forget such a night like this, thank you Joan As Police Woman.

Francesca Moore’s passion for the performing arts has seen her photographing live stage events for the past ten years; shooting at intimate venues and major stage events for a range of editorial clients, and with the production of limited edition fine art prints. Her personal work stems from interests in people and the environment, where she draws on her scientific background to portray humanitarian, social and environmental issues. She began contributing to the SOURCE after a permanent move from London around the time the magazine was dropped for an online only presence. She’s assured there’s no correlation.
← PREVIOUS POST
Oska Bright Film Festival Review
NEXT POST →
Locally Sourced, April 2022