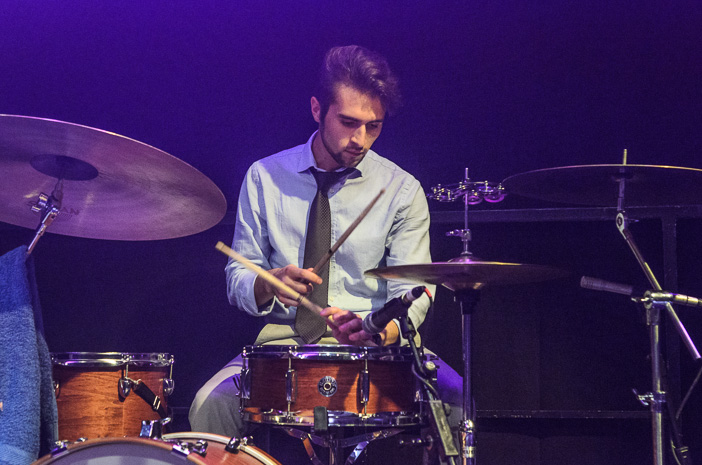 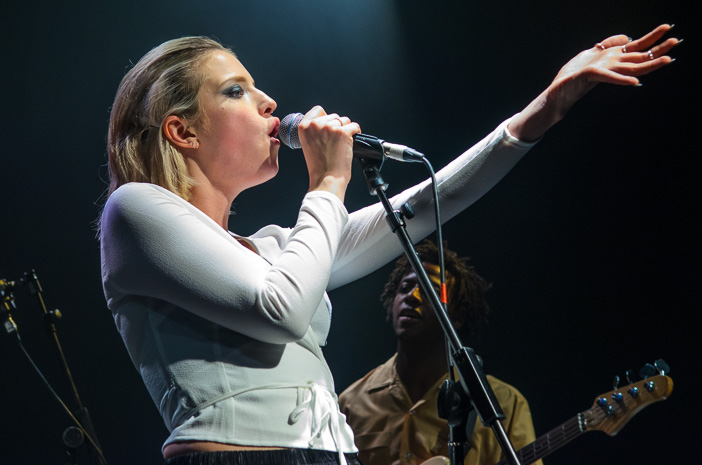 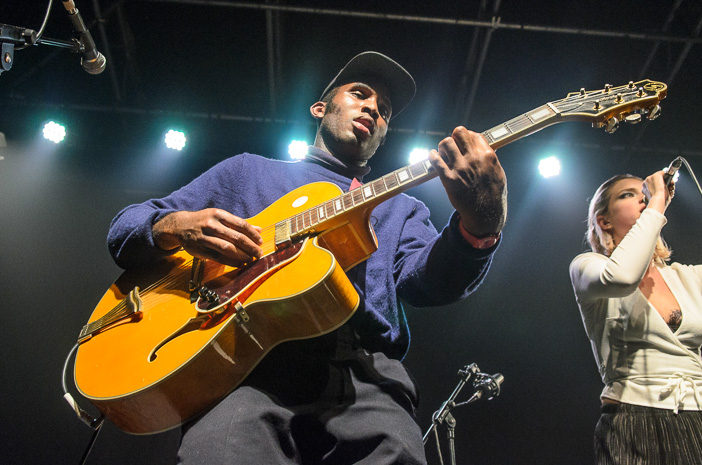 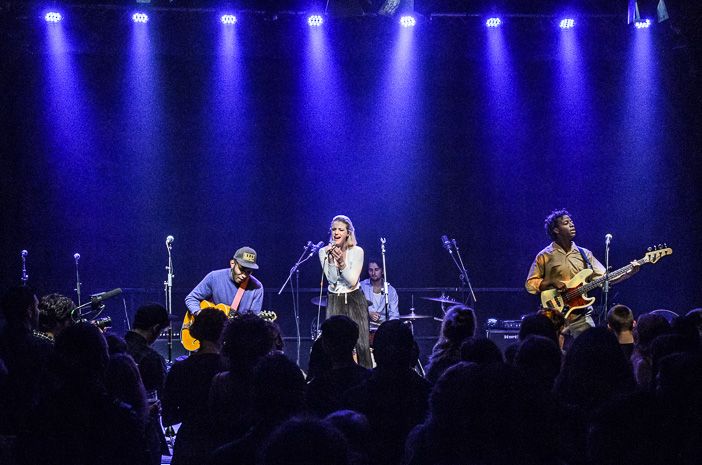 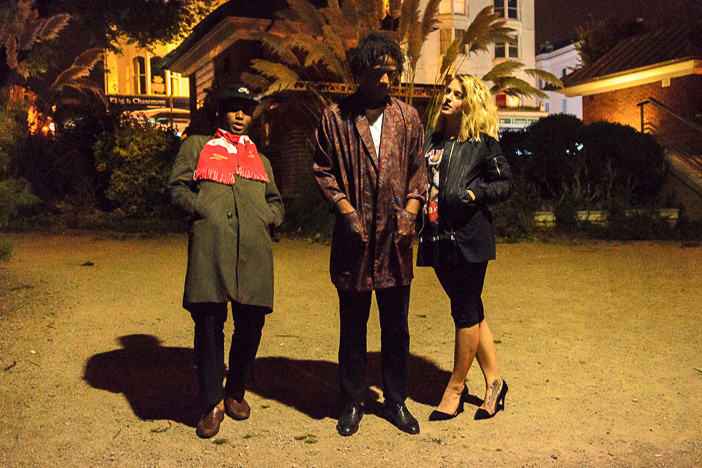 Originating in Brighton via Bradford and Bristol, four-piece band Normanton Street have spent the last few years establishing themselves on the local scene by finding their own sound, a blend of hip hop and soul styles with female vocals, and through a warm and positive approach to everything they do.

It’s tough to make it in Brighton’s busy live music scene, but with loads of local gigs, some European shows and a SXSW appearance under their belts – as well as New York dates next month – Normanton Street seem to know what it takes to succeed.

We chatted to the band about their first shows together, their approach to writing and their upcoming Concorde2 show. Vibes incoming. When did you guys start?
Nicholson: Normanton Street was a very different sounding band that started in September 2011, and there were four of us. Four boys. Four solo artists with guitars. We played like that for about 18 months until three and a half years ago. Then we met Phoebe and since then it’s been more of a conventional band. Naturally-made soul and soulful hip hop and jazz.
Phoebe: I got drunk on a Sunday and we went to Vodka Revolutions, I sang at Nicholson over very loud 90s R’n’B and a Lauren Hill song. Then he was like “Alright, we’ll cover it!” [Laughter]

And your first proper gig together?
Nicholson: It was at 10 Below, Ship Street at Debonair Club. Phoebe was like this new sensation; she came out and did two songs with us.
Phoebe: I think we did ‘Juicy’ and ‘Doo Wop’.
Ned: It was like when Dylan played electric. [Laughter] 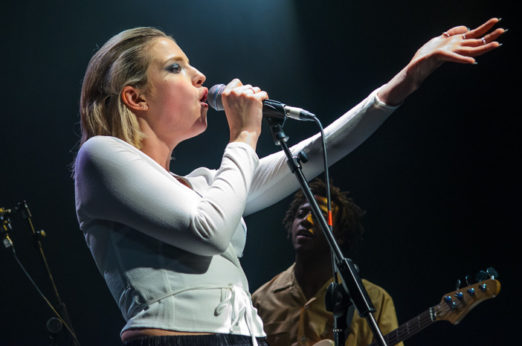 What was the first gig like?
Phoebe: I was terrified and nervous.
Ned: It was nice, it was normal. It worked quite well, and people loved it when we brought Phoebe out. People went nuts for her, like Michael Jackson!
Nicholson: You could see the look on people’s faces in the first few gigs. We knew it was working well and that just helped with the performance and allowed us to enjoy it more.

Who writes the tunes? How does the songwriting process work?
Ned: It’s very organic how we write. We all write songs.
Phoebe: We suggest things for each other but we don’t write each other’s parts. Someone will just come to the group with an idea and it will evolve, it’s always different and it’s always nice.

Do you bring ideas to rehearsals or do you jam and let it flow from there?
Phoebe: All of those things. It’s a democracy.
Ned: Even Nico [the drummer] will bring a beat now and then and we’ll go off that. 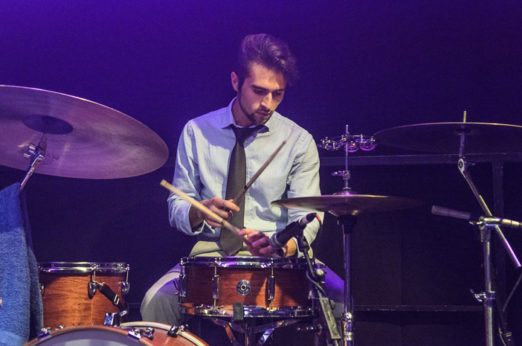 Brighton has a very busy live scene, what’s kept you going?
Ned: We’ve done alright; we’ve done well in Brighton because we’ve worked hard. When we started out we played all the open mics, all the smaller venues, then we played bigger ones. We haven’t missed a step. So we feel like our fanbase in the city has been solidified, some have seen us in a really small venues and then in bigger places. I feel like it’s to do with that, our groundwork.

Has anyone given you good advice when you’ve been feeling that things aren’t going so well?
Nicholson: It’s probably fair to say that we’ve never felt like that in Brighton. I think that’s because we just keep going. We don’t look around.
Ned: We’ve been doing it gradually as well whereas as some band progress really fast. We’ve been steadily creeping.
Nicolson: There’s obviously been a couple of gigs where it hasn’t been as successful in terms of numbers as we would have hoped, but we’ve never really taken it personally. More that we need to promote it better. That’s how it’s been. 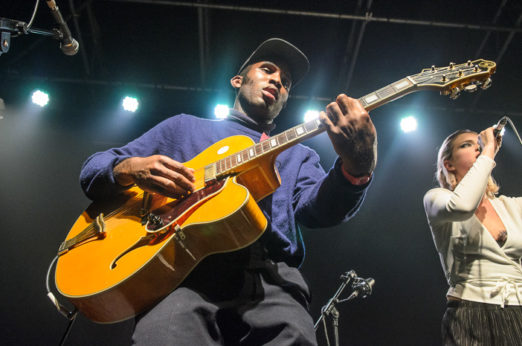 What’s the favourite live show that you’ve played?
Nicholson: Cardiff, Gwdihw? Tiny little venue. I had a lot of fun. It wasn’t a lot of people. It was the first time we’d been there. Everybody was just on the hype and it was the first time I think I noticed people singing along.
Phoebe: My favourite has probably gotta be Birthdays in London. I wasn’t gonna say that until you mentioned the singing along thing. That was the first time when the 20-30 people I could see at the front of the crowd were people I didn’t know. I’d never seen them before and they were singing my lyrics back to me. That was one of those moments I will remember forever, like hands down. It was insane; I didn’t need to sing it was so loud.
Ned: I particularly enjoyed a gig we played this summer at The Harlem Jazz Club in Barcelona. That was the second time we went to Barcelona and a lot of people came out to see us. It was a great crowd, busier than the first time. It was also great being in a different country, being in Spain with different ages in the crowd. A lot of older people, a lot of people our age, kids in there too. Vibes.

What have you been listening to lately? Anyone you want to throw some light on?
Phoebe: My friend Alyss, we used to gig with her. Now she’s working on solo stuff and has moved to London. It’s incredible, perfect upbeat garage house. She produces, she writes it and she’s a phenomenal lady. Also definitely check out Bobbie Johnson.

What’s the response been like for your last release ‘Life’s Real’? How are you finding releasing on your label QM Records?
Ned: It’s been great, the response to ‘Life’s Real’ has been exceptional actually. We’ve been working on releasing music for quite a while now and we’re starting to get better at it. The more stuff we bring out the better we get at releasing music. It was a good experience the first time we worked with a PR company, learning that game as well. 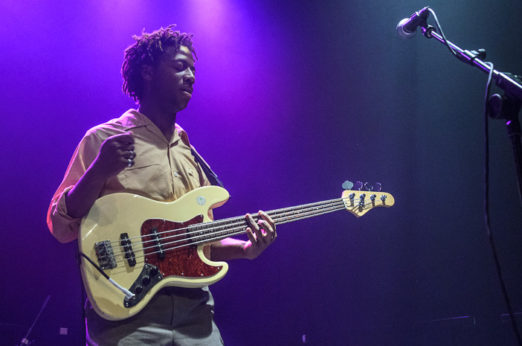 Do you always want to release your music yourself? Was it a choice over a major label? What are the benefits?
Nicholson: I’ve never had any experience dealing with major labels but I know the general vibe, which is they give you an advance and then you’ve got to make it back. The pressure is on the label and on the artist to make their numbers. We don’t have any of that pressure to make numbers, at all, or to sell a certain amount of copies. Which is a beautiful thing.
Phoebe: There’s a lot of control there.
Nicholson: Yeah, we have full control and it feels good. You know what I mean? Making your art and then releasing it…
Phoebe: …how you want.
Nicholson: Exactly how you want. Obviously we’ve got to be smart about it, and we have to think as seriously as industry people and major labels do. As serious as that. The strategy, obviously, is going to be a little bit different, but overall I prefer it. In the last six months to a year we’ve started to take that step towards full time musicianship and my personal aim was to get into music anyway. So now that we’re nearly there I don’t see any benefit of going to a major besides crazy exposure, but then you get the pressure. Without the pressure we just continue to build and it’s cool man.

And you could burn out?
Nicholson: The issue is that risk, and I think when we do our thing we can be calculated. This is our trajectory, in terms of numbers at gigs and downloads we can predict so long as the music is good.

Was the idea behind the label that you can handpick artists to release?
Nicholson: We’ll approach someone we’re really feeling and work with them, or bands that we see that might need some advice or exposure. We’re getting on now, late 20s. [Laughter] We find ourselves working with 18-year-olds and they’re asking us how do we get gigs? How do we release music? It’s nice to help out with that.
Ned: Behind the scenes we’ve helped a lot people and we’d do that anyway. QM is more of an agency and live events company but we are going to start putting more artists out. 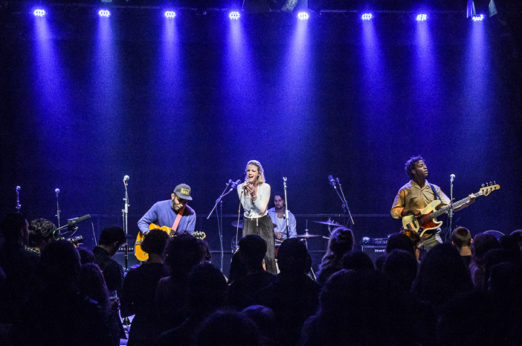 You recently got booked for some New York gigs, did that come out of nowhere or from you going for it?
Nicholson: I think it’s a bit of both, because we went to the States earlier this year, but the short answer is it came out of nowhere. We were hosted at SXSW and we did a few shows and got ourselves about and I think we’ve had the exposure from there even though it’s hundreds of miles away from New York. We got approached by email, since then we’ve hustled a few more gigs. Silvana and The Shrine in Harlem, a place called Pianos in Manhattan and Shea Stadium in Brooklyn. It’s not a stadium. [Laughter]. All in the first week in December.
Phoebe: All the work that’s in gone in over here is now going to fund that trip to New York. We’re really excited though. I’ve got to get a good winter coat, it’s going to be really cold!

Do you have a goal as a band to play certain gigs and festivals? Are you already thinking about next summer?
Nicholson: I don’t think we’re that specific. It’s more about what level we want to be on. We say we want to do roughly that type of festival.

Any ones in particular?
Nicholson: In all honesty it varies a lot. For example, this summer we played at Soundwave, main stage, good slot on a Saturday evening. The same summer we did a really small festival, but I can’t remember the name off the top of my head.
Phoebe: We did one in the West Country, Fanny’s Meadow.
Nicholson: That’s a good festival but the levels are different. We’re happy to do it because it’s new people, new faces. We’re not thinking “what’s the best type of festival or gig we can get?”. It’s up and down, but overall it’s up and that’s what we’re trying to do.
Ned: We just want to play to as many people as possible. As long as we’re playing festivals and we’re playing lots of them then we’ll be growing anyway, moving forward.

Tell us a little bit about your upcoming ‘With Friends’ show at Concorde2.
Nicholson: We were talking with J-Felix about how getting gigs can be quite tough sometimes. So we decided to just cut the middle man out and do it ourselves. Ironically, we’ve ended up working in conjunction with Earlybird Media, but the initial idea was to get a late night gig slot and make a big party out of it ourselves.
Ned: Every few months we’re gonna do a big night in Brighton just cos we love the city. The first is at Concorde2. Some of the local artists are ones we’ve put on at smaller venues and they’ve sort of grown with us I guess. The sort of artists we like as well are on the line-up, we’re gonna bring out some of the people during the set. Then we’re linking it with Donuts who are a DJ squad who are super cool.