Porridge Radio are rapidly become one of the most fun live bands in town, and this summer released an excellent debut album in the form of ‘Rice, Pasta and Other fillers’ on the Memorials of Distinction label.

We spoke to band leader and song-writer Dana Margolin about the band’s genesis and their riot-girl losercore trash-rock aesthetic.

Porridge Radio started as Dana performing her personal, emotionally-charged songs solo at Open Mics around Brighton. Asking amongst friends for people who wanted to form a band she found Madilda Royale, Snake Leather and Stink Pup. These are not their real names (!)

Stink Pup (aka Sam) has been playing drums since he was ten and is musically dexterous, currently in the process of learning the saxophone. Madilda Royale (Maddie, also pictured) had never picked up an instrument until a couple of years ago when she was given a bass guitar but she has proved a quick learner and has become an engaging frontwoman. Snake Leather (Dan) tends to hide in the shadows as Porridge Radio’s quietly imposing second guitarist.

Fifth band-member Gorgus Gorgistat was a friend/fan who loved Dana’s songs so much she learnt all the words and so was a natural to provide sing-along and harmony. There’s also silent partner Josh (aka ‘Big Boss’) of label Memorials of Distinction, making up the gang who seem to live in each other’s pockets, in the best sense. 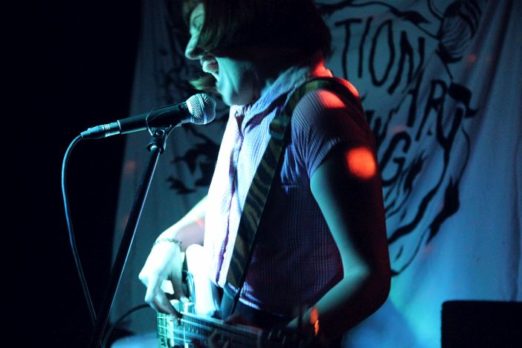 The band has recently completed a tour with ‘Evans The Death’ which took them from Brighton to Glasgow via Salford in Manchester, a gig for DIY collective PLSTXT in Leeds and a pub in New Cross in London. This year they have also supported Eleanor Friedberger at the Hope & Ruin in Brighton and Shonen Knife at the Haunt, although Dana says they prefer smaller gigs where there is a more direct connection with the audience. At the Hope, she stopped their set half-way through to gather the band together to see if she’d won on a scratchcard, and somehow this moment of mad anarchy seemed to perfectly fit the band’s ethos.

The album ‘Rice, Pasta and Other fillers‘ was mainly recorded in their drummer’s shed in a village in Hampshire. The main parts for the songs were recorded in just a couple of days but the band weren’t happy with the results and were considering scrapping the whole thing. However, a proposed tour prompted a rethink and they decided to press a limited number of copies on cassette to sell at the gigs. When it was released on-line, Josh was still tweaking the mixes and over the first few days kept re-uploading slightly newer versions of some of the songs. Apparently they’ve settled on the current mix now.

Prior to the debut album, they’d also released a split cassette EP with Los Angeles-based band ‘West America’ including the fan-favourite ‘Born Confused’ with its memorable punch-line “thank you for leaving me, thank you for making me happy!” They are currently working on a follow up album and have six songs written already, although Dana says she doesn’t expect it to appear before next year as she has important business to attend to – like earning some money and finding somewhere to live. 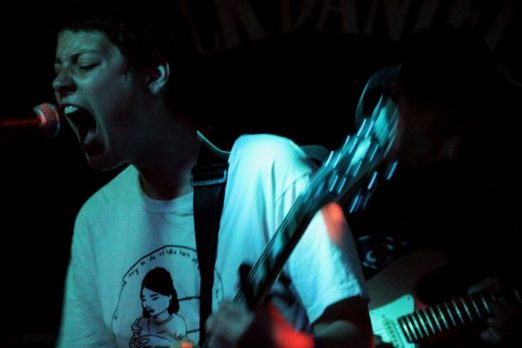 Dana says she likes the cassette format because it suits Porridge Radio’s less-polished audio sound. “If it was higher quality, you’d hear all the cracks,” she says.

She is quite a prolific songwriter. She carries around a little book to jot down ideas in and her songs start from the words, to which she adds a loose tune and then other band members bring their magic. Dana jokes that she wants to write pop songs (“I wrote two yesterday,” she claims). She says she’s known for her sense of drama and on stage she has a fierce energy, but speaking with her in person she seems mild-mannered and gentle. Of her tense, pointed lyricism she says “it’s good to get it all down on paper and out of your system. Then I can come back to it later.” She says the songs “embrace extremes” but that that’s not her reality. “I capture it and then process the feeling”.

The song ‘Barks like a dog’ is a good illustration of her style. She says it has a “really sad feeling”, that it is “about a difficult relationship”. But at it’s core is a piece of playful fun, where someone did actually just ‘bark like a dog’ and Dana sings that she’s “smiling endlessly”. Hard on the outside, soft on the inside, and “the cracks let the beauty seep in”, as the song goes. It works just as well in its gentler acoustic demo, as it does in the full-on roar on the album.

‘Worms’ is another Porridge Radio album track, apparently loosely based on the singer Lana del Rey of whom Dana’s a big fan. She says she likes Rey’s songs, with their dark lyrics encased in a catchy pop shell, and admires how she has created “an image which plays with the white, privileged American dream”. Dana’s song sounds like an edgy put-down but it’s playful and makes the listener think. 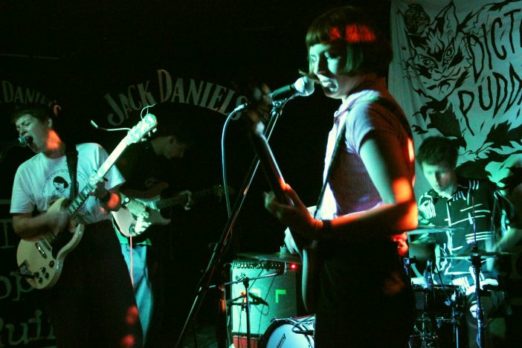 There’s another excellent Porridge Radio song, ‘Losercore’, which doesn’t feature on the first album but is almost certain to be on the next. Apparently the song is based on a Lou Barlow song of the same name which Dana tried to cover but couldn’t learn the parts for, so she wrote her own whilst sitting in the countryside high up on the South Downs, and the demo was recorded there-and-then straight onto her laptop. Like most of Dana’s songs, Losercore is loosely about a real person, but it’s also about that feeling of frustration, of not being able to pin things down, whether they’re the chords to a Sentridoh song or a relationship or whatever.

Losercore’s title could also be an anthem to the band’s sound. At home with losing at life’s little trials, Porridge Radio are winning musically.

Porridge Radio gig regularly around Brighton. The album ‘Rice, Pasta and other fillers’ is currently available to listen and download on bandcamp. Vinyl is also here!

Jon Southcoasting photographs all sorts, including music, writes about things, as often as not musical, and sometimes plays his own songs too. He lives in Brighton.
← PREVIOUS POST
Kevin Devine, Thurs 20th October
NEXT POST →
Boundary Brighton Review