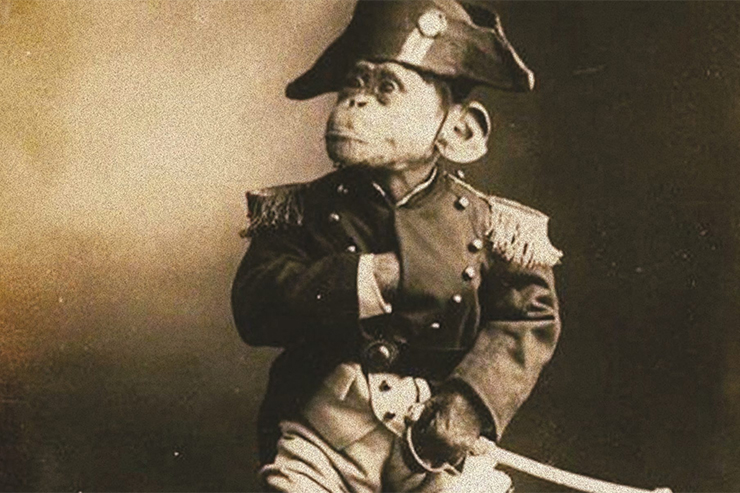 Six Of The Strangest Hangings

The stories of victims from the noose are varied. However, when the hangman doesn’t quite hit the mark the consequences are always surprising.

The Hartlepool Monkey
On a stormy night 200 years ago, a French ship sunk off the Hartlepool coast leaving one survivor, the ship’s mascot, a monkey wearing a miniature military uniform. The villagers from the nearby fishing community had never seen a monkey before and mistook the animal’s chattering for a foreign language. As the Napoleonic Wars raged on, the locals were terrified they had a spy in their midst, so they tried the monkey for espionage right there on the beach where they found him. The animal could not answer their questions so he was found guilty, dragged to the village square and hung, on the charge of being a foreign spy. The vertical part of the ships mast he was hung from is still visible on the beach between the Pilot pier and the Heugh Battery.

The Flamboyant Highwayman
An irrepressible highwayman evaded capture for months and was finally caught in bed at his London home in the company of ‘a woman of the town’. During his imprisonment at Salisbury Jail Isaac Darkin could have married many a woman of means and safely left his risky profession. However Eastcheap-born Darkin turned down security and made Oxford Jail his last port of call. He spent his time in prison drinking and reading the part of Macheath from ‘The Beggars Opera’. Fearless to the end, at his execution, in 1761, he placed the noose over his head and without waiting for the hangman, stepped off the ladder. He dived to his death wearing a flamboyant waistcoat, watched on by his adoring public.

Killer Pig
In 1386 a pig was held in a Normandy prison and charged with tearing the face off a three-month-old boy, Jonnet le Macon, who later died. The pig was given a fair trial with full legal representation. The three-year-old sow was later sentenced to be “mangled and maimed in the head forelegs”, and dressed in a jacket and breeches for the occasion. A receipt of payment for good services at the gallows showed the hangman was paid a premium to buy a new glove especially for the execution, having already dragged the pig to the noose.

The Return of Anne Green
In 1650 Anne Green, a scullery maid from Oxfordshire, was found guilty of infanticide. She miscarried the child of her master’s son and in a panic hid the stillborn in the kitchen. At Anne’s request, at the gallows, several of her friends pulled at her swinging body to make sure that she was dead. However, when Anne was placed on the dissecting table, medical students detected a faint pulse. Having her limbs and extremities rubbed immediately revived her. Heating plasters were applied and she was placed in a bed with another woman to keep her warm, which brought back her health. With the help of medical science she later married and had a family.

Bungled at Babbacombe
John ‘Babbacombe’ Lee was convicted of the murder of his employer, Emma Keyse, at her home at Babbacombe Bay in 1884. He was sentenced to hang even though the evidence was weak, amounting to little more than Lee having been the only man in the house at the time of the murder. Each of the attempts to execute Lee failed. Despite being carefully tested by the hangman beforehand the trapdoor of the scaffold failed to open every time. Finally the home secretary commuted the sentence to life imprisonment. Lee continued to petition successive home secretaries until he was finally released in 1907.

Half-Hangit Maggie
Maggie Dickson was a Scottish fish hawker who became pregnant by an innkeeper’s son. When her baby, who was just a few days old, died prematurely she left the body on the banks of the river. The baby was soon discovered and traced to Maggie so she was hung for hiding the child, at Grassmarket in 1724. After her hanging Maggie was taken away for burial on top of a wooden cart. The journey was interrupted by the sound of banging from within the coffin. The lid was lifted and Maggie was inside, alive. She became famous, got the nickname ‘Half-Hangit Maggie’ and has an Edinburgh pub named in her honour.

Lita Doolan is a writer/performer. Her show ‘Mary Blandy’s Gallows Tree’ comes to Brighton Fringe. Mary Blandy was hung in 1752 for poisoning her father. Mary alleged that her lover Captain Cranstoun had told her the powder she administered was a love-potion; but apart from her statement there was nothing to connect him with the murder. The Newgate Calendar described Cranstoun as a ‘profligate wretch’ who was never brought to justice. Hear Mary’s story at The Warren on May 10th – 12th.

Sometimes an article is a bit of a team effort, and those are tagged SOURCE Writers. If you’d like to be part of that team, hit the Contact link at the top and get your work on this website.
← PREVIOUS POST
Interview with Nick Hemming of The Leisure Society
NEXT POST →
One By One Sixty, May 8th - June 9th
Mailing List
Recent Posts
Website developed in Brighton by Infobo
Copyright © Brighton Source 2009-2021
Six Of The Strangest Hangings - Brighton Source