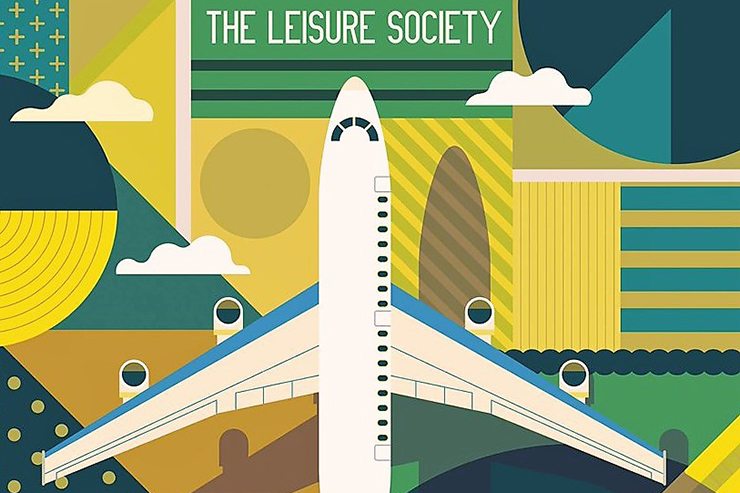 Interview with Nick Hemming of The Leisure Society

The new Leisure Society album, their fifth, is titled ‘Arrivals & Departures’. Released on their own label, the double album has been receiving some well-deserved excellent reviews on the back of its 16 gorgeously constructed and crafted songs, most of which were born from the break-up of lead singer Nick Hemming’s relationship with former band member Helen Whitaker.

Brighton Source spoke to Nick Hemming ahead of the band’s forthcoming gig at the Komedia.

Nick: “We’ve been working on the new album for about four or five years. It started out as eight or ten songs but the recording process took so long, largely because I was living out of my suitcase, and I ended up setting up my studio wherever I could, in people’s kitchens or in rented houses, things like that and I kept writing songs about whatever was going on at the time. That’s how it ended up being a double album.

“I was writing the songs while Helen and I were still together, but we were going through the break-up and it was quite a protracted thing. So the album covers all of the stages of breaking up really, the grief, the anger.”

The album is recognisably a Leisure Society album, right down to the cover, another in a series of covers by Worthing-based illustrator Owen Davey. However, whilst the sound might feel familiar to fans of the band, this new collection of songs is structured in two halves, the first half including some typically beautiful heart-worn lyrics and touching but edgy tunes, the second a lot more rocking and experimental. It’s a stunning work. Listen to ‘A Bird, A Bee, Humanity’ below.

Nick again: “It took so long and I put so much into it that after four years you lose all perspective but the reaction to the album has been heartening, just lovely really.

“Social media has been good, people genuinely taking it to heart. You can tell when it’s really hit a nerve with somebody and those honest emotional reactions are always the best.”

The album was recorded when Nick was living out of a suitcase, in various places including France and the Union Chapel in London, but Brian Eno also got involved…

“That was quite late on in the process actually, on the song ‘I’ll Pay For It Now’. That song almost made it on the last album but it took me ages to get a take I was happy with. I ended up recording it in a little cottage in Derbyshire and I thought we should get Eno involved, so I emailed him the basic take and he responded. He was on a train but said as soon as he got back to his studio he’d have a bash at it, and the very next day he sent us four tracks of melodic atmospherics which wasn’t what we were asking for but was just amazing. He had really put some thought into it and told us to use whatever we wanted.”

The Leisure Society have known Brian Eno, famous for his work on Bowie’s Berlin trilogy amongst other things, since their early days.

“We met Brian back when our first album came out. He gave a talk and somebody asked him what he was listening to and he said ‘The Sleeper’ by the Leisure Society so our record label set up a meeting and we went round and had tea and biscuits and ended up going to his Christmas party and we’ve been in touch ever since but this was the first time we’d done anything together.”

“I’d love to do more in the future, you can’t get better than collaborating with Eno, although I don’t know how that would work.”

Originating in Staffordshire, Hemming has spent about seven or eight years living in Brighton or London.

“Brighton always has a place in my heart. I was down there at the weekend doing some promotional work and it still felt like home. I was living in Kemptown by the sea and it was so lovely. It was weird going back this time because a lot of my friends in Brighton were really Helen’s friends and I spent a lot of time in my room writing songs. Helen’s flute was an integral part of the Leisure Society classical folk-pop sound. Had her departure affected the band musically?

“Yes, definitely. Just after Helen and I split up we did a trio tour and then we did a full band tour last year without her, but she played on the album and we did a session at Abbey Road for a charity album recently and she played on that as well.

“‘The Sleeper’ came together about the same time that Helen and I came together. She was playing for Sons of Noel and Adrian and we just connected. She came to record flute on ‘The Last Of The Melting Snow’ and it obviously massively affected the sound, so she was a big part of our sound right from the start.

“Now that she’s not there we sound a bit bigger and more powerful, because sometimes less is more, and in the gigs that we have done I think it works really well, but I love what she does and I want to carry on using those sorts of sounds.”

So you’re not looking for a flute replacement?

“No, that would be weird. She actually said when she came in and did her parts for the new album that she couldn’t have lived with somebody else playing flute on the album. She played beautifully and I am so glad we’ve got her on the album.

“Live we’ve got a bit more of a rocky feel now. We’re definitely playing together better than we’ve ever played and it’s a more powerful sound.”

Their UK tour includes Leeds, Glasgow, Bristol, Norwich, Nottingham and Manchester, where their following seems to have grown lately, so much so that they had to upgrade to a larger venue for their gig there. The band will also be playing Union Chapel in London and touring in France.

“The album has been going down really well in France. It was album of the week on FIPP Radio and in a few magazines too. Our tour there seems to be mainly playing chateaus!”

The Leisure Society play Brighton’s Komedia on Wednesday 22nd May.
The album ‘Arrivals & Departures’ is out now.

Jon Southcoasting photographs all sorts, including music, writes about things, as often as not musical, and sometimes plays his own songs too. He lives in Brighton.
← PREVIOUS POST
The Great Escape 2019 Review (Thur)
NEXT POST →
Six Of The Strangest Hangings
Mailing List
Recent Posts
Instagram has returned invalid data.
Website developed in Brighton by Infobo
Copyright © Brighton Source 2009-2019
Interview with Nick Hemming of The Leisure Society - Brighton Source