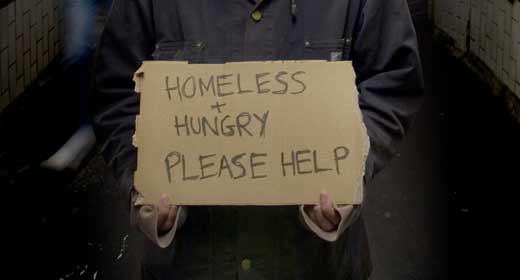 We experience things we’ve never experienced before, and write about them. Nick Coquet has a nice warm house and as such has never had to sleep rough. But not everyone can say that, unfortunately.

THE REASONS
I’ve been as guilty as anyone of ignoring the homeless; avoiding eye contact on the street and ‘not hearing’ pleas for spare change. So I thought I’d see what that’s like from the point of view of the pavement, for 24 hours.

THE EXPERIENCE
On my way into the centre of town, with just some incidental coppers in my pocket and a sleeping bag, I managed to walk into a lamppost, gashing my temple open. With blood dripping down my face, staggering with pain in the pouring rain, I’d made an auspicious start. Already people were looking at me differently, holding their stares disapprovingly as I was now apparently insignificant street furniture. It was one o’clock.

Huddled in a doorway, the skies cleared and sun broke. The beach instantly filled with holidaying die-hards. With many hours to kill, I made my way down and lay on the damp stones. Vast amounts of money were changing hands for trifling treats, ice creams and lollies, as I jangled the pennies in my pocket. Tables and bins groaned with half-full chip boxes, seagulls swooped. I suspected after a couple of days of this I’d have the same lack of social reserve.

With literally nothing better to do, I walked. A couple of hours into my assignment the die was now visibly cast. A furrowed frown from my pounding head, face encrusted with dried blood, my scruffy coat and sleeping bag told an obvious story to the families whose paths altered to avoid me. As I crossed Kings Road the unpredictable skies opened, and around a hundred years’ worth of rain fell in a few minutes. The well appointed ran for cover, pub tills rang out appreciatively. My shelter would be less inviting as I took cover in another pissy doorway, soaked in seconds. Unseen by all but the most inquisitive eye now, I was truly an anonymous Brighton blight.

As the weather eased, I filled the next few hours walking. I walked to Hove, walked back again, in and out of the Lanes, figuring some forced exhaustion might help me sleep later on. All around me were t-shirts and tattoos; I was damp and cold in my shabby coat. I kept an eye out for likely shelter under which to spend the night, but couldn’t make up my mind how to play it. There was obvious cover under the pier, but it looked a bit syringe-y under there. A secluded spot would inevitably be quieter, but I feared a Clockwork Orange-style tolchocking from ultraviolent young malchicks. Seeking inspiration, I looked out for my comrades of the night, but everyone seemed to have some place nice to go, apart from a few Big Issue sellers. They didn’t ask me to buy one.

As the sun went down, so did the temperature. The daytime city slowly morphed into night; ties were loosened, pubs spilled out onto the street. I was steeling myself for the mentally arduous task of sitting and asking strangers for money – I had to eat at some point. I sat outside Boots for a bit, but this was apparently another Big Issue pitch and they had something to offer in exchange. So I moved down to the closed Barclays on North Street. I went to say it so many times, but despite the spoilt protests of my cosseted belly, the words just wouldn’t come out. Every time I went to speak to someone, they’d be braying into a mobile or in iPod seclusion. Then the words finally came out. “Spare any change please?”

I’d decided to beg for an hour, tabulate the responses and count the cash. You hear about so-called career beggars, how they clear so much they don’t need to work. That might be true in Covent Garden on Christmas Eve, but it’s certainly not true in Brighton. “Spare any change please? Spare any change please? Spare any change please?” My own guilt flooded back as I recognised myself in the ignoring hoards. Not a flicker of acknowledgement. Ten, eleven, twelve people, nothing. I stopped counting. It would have been easier to count the occasional “sorry, mate”. I glumly recognised that too. I checked the clock opposite, what had felt like a couple of hours had been ten minutes. A German girl passed me, hesitated and came back. “Do you want this?” she asked. It was a small carrier bag of popcorn. It was salted, and the sweetest thing that had happened all day.

It was 11pm. The begging hour had passed. I’d made £1.41. Four people had reached into their pockets, out of what must have been hundreds. Added to the eleven pence I already had, this was enough for a cup of tea and a Snickers bar. I sat on the long bench opposite the theatre. Along from me a gaggle of street drinkers sipped at unctuous tins of super strength lager, singing tunelessly at passers by. I laid down, my sleeping bag for a pillow, and pulled my hood over my face. It was to be a long night.

Brighton never sleeps. The restaurants opposite closed, the Mash Tun closed. Yet still people streamed past. Some bastard was banging bongos in the Pavilion Gardens until four o’clock. Every time I closed my eyes sirens wailed, drunks shouted, stumbling girls sobbed into phones. I think I was vaguely asleep when I heard a shout, “Photo!” and approaching footsteps. A drunken Strokes-lookalike apparently thought it would be amusing to be photographed gurning next to my prone form. I sat up, he grinned at me, and staggered off. This wasn’t going to work, so I walked some more to nowhere in particular. The sun was coming up.

By eight o’clock I had five hours to go. But I’d had enough; I was tired, hungry and dehydrated, I couldn’t take any more. I thought about trying to beg for bus fare home from the sleep-refreshed city workers, but my heart just wasn’t in it. So I walked home and guiltily got into my warm bed.

WAS IT WORTH IT?
Yes, in a weird way. No one would live like that by choice, so you have to figure there’s some desperate back-story to each individual you step over or ignore. If you’ve got some spare change, please, spare it. I certainly will do more often now.

FYI
It’s estimated that around twelve people a night are sleeping rough in Brighton, down from sixty in 2002. Nationally the figure is around five hundred, approximately a seventy-five per cent reduction from 1998.