Thousands March In Brighton Against Trump

Thousands gathered in Brighton tonight to protest against Donald Trump’s controversial new immigration ban. From 6pm the area around Brighton Town Hall was packed with protestors, many of whom had only heard about the event hours before. Despite the fact it was organised a mere day in advance there were more people than we’ve ever seen on a Brighton demo. Some say there were around two thousand in attendance. Not bad for a wet Monday night. 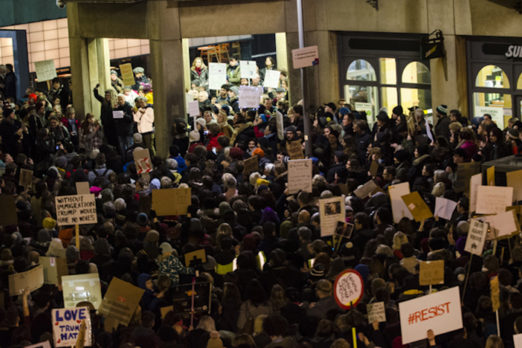 Given Brighton’s status as a ‘City of Sanctuary’ and the amazing work done in Calais by the Hummingbird Project, the refugee issue was sure to mobilise locals. However, even the organisers seemed unprepared for such a turnout. There was no PA for announcements which meant the speeches were lost on those unable to squeeze into Bartholomew Square. People were still arriving an hour later when police lines formed on the adjoining streets to prevent a crush.

It was a noisy and diverse protest, with many bringing along improvised placards made from pizza boxes and random bits of cardboard. “Another Embarrassed American,” read one. “There Will Be Hell Toupee,” read another. It was hard to miss this one atop a six foot pole: “Build A Wall Around Trump And I Will Pay For It.” 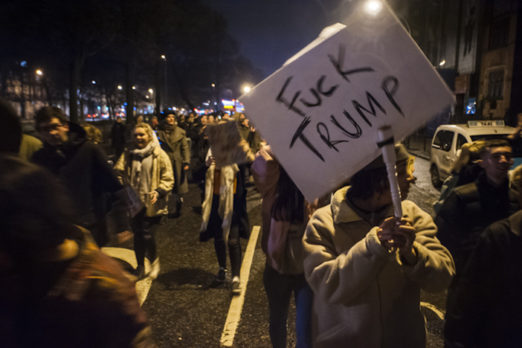 Though the focus of the demonstration was Trump’s Muslim ban (“refugees are welcome here,” being a repeated refrain), there were plenty of issues on the agenda. The President’s attitude towards women inspired some brilliant putdowns, while others called for the deportation of Theresa May on account of her weak reaction to his policies.

At around 7.30pm the protest turned into a spontaneous march which rounded the corner onto North Street and headed to Brighton Station, stopping traffic along the way. Leaving the enclosed meeting area was probably a wise move, and the crowd picked up momentum – and members – as it went. Thankfully the police stepped aside and although the demonstration brought much of the city centre to a standstill, it continued peacefully with humour leavening the obvious anger. 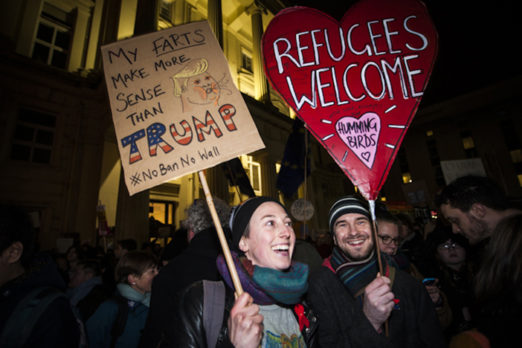 After reaching the station, the march paused while an impromptu mass singalong broke out, repurposing the tune of ‘Hey! Baby’ as a rather rude anti-Trump anthem. The protest proceeded to thread back through town to the seafront before doubling back and eventually dispersing at The Level.

Despite the jubilant atmosphere and the impressive size of the protest, some of those we talked to said they were unsure what it would achieve. “It’s better than sitting at home feeling hopeless,” one told us. However, taken in context alongside simultaneous events in cities around the UK, what happened tonight represents a huge wave of dissent that surely can’t be ignored, at least by our own Government. 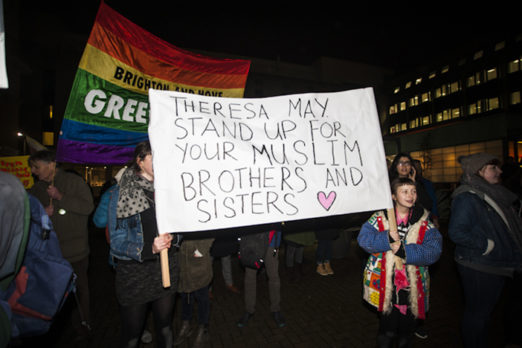 Sometimes an article is a bit of a team effort, and those are tagged SOURCE Writers. If you’d like to be part of that team, hit the Contact link at the top and get your work on this website.
← PREVIOUS POST
Isaac At Review
NEXT POST →
Lewes Psychedelic Festival 2017 Review
Mailing List
Recent Posts
Website developed in Brighton by Infobo
Copyright © Brighton Source 2009-2021
Thousands March In Brighton Against Trump - Brighton Source