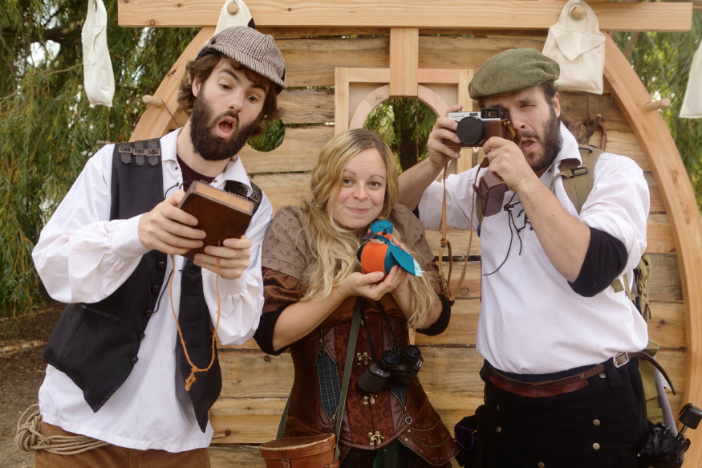 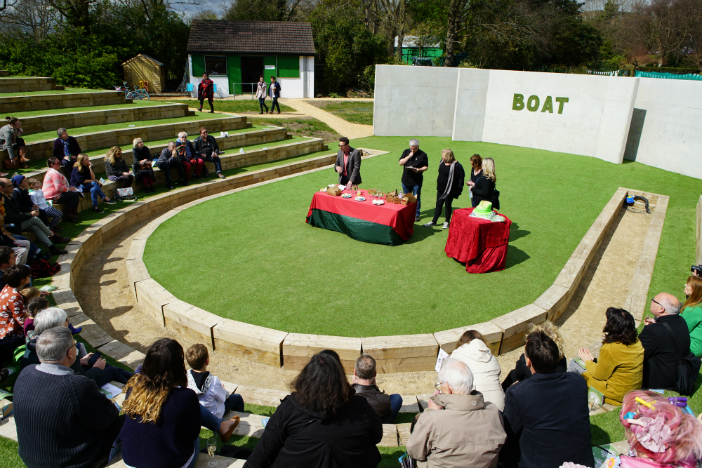 The emergence of Brighton Open Air Theatre, with its swirls of seats cascading down to a green horseshoe stage in Dyke Road Park, might just be the best thing to have happened on Brighton’s arts scene this year. It’s certainly an incredibly welcome addition – you sense something like this should have happened a long time ago – and it’s been a while coming: since the death of playwright and construction manager Adrian Bunting, in May 2013, his vision for the theatre has been accelerated through a fundraising programme which raised £100,000 before planning permission was granted at the end of 2014.

Bunting, who suffered from pancreatic cancer, left his life savings (£18,000) to the creation of a permanent open air amphitheatre on the disused bowling green he identified, asking four of his closest friends to work with his designs during his dying days. His mother, Isobelle, opened the theatre a year ago, and his spirit looks to be firing its lively opening months, overseen by a team of unpaid volunteers and relying on donations and audience support to create the kind of magical space that nurtures important theatre.

Its Brighton Festival line-up encapsulated its strengths and inclusive nature: Festival Director Laurie Anderson’s Music For Dogs, a piece performed for the ears of a sitting of locally-recruited canines, grabbed the headlines and sold out in minutes, but there’s also been a particularly anarchic reimagining of Shakespeare’s The Two Gentlemen Of Verona (by the Globe Theatre Company) and a family show in Saint-Exupéry’s The Little Prince, with young actors from across the city having already taken part in a performance of The Secret Garden earlier this month.

The tricky but crucial challenge of inspiring younger generations is perhaps the role BOAT seems so well poised to take on. Hatching College, at the end of the Fringe, features a giant nest, puppetry, music and birds for very young kids, and the theatre is playing the role of host, alongside partners including BHASVIC, The Old Market, Brighton and Hove Youth Services and a range of the best local producers for young people, for next month’s Starboard Festival, a festival of theatre made for and with young ‘uns. “During the opening night I had a strong sense that I wanted to do something to build on the community-led way that it came into being,” says Naomi Alexander, who came up with the idea for the festival during the theatre’s opening gala last May.

“BOAT has opened thanks to the generosity and hard work of a few local people who persisted with determination in making this dream a reality. It has not had a penny of public subsidy. I wanted to do something to enable children and young people to feel like this space belongs to them, too.”

A snail-seeking show by South East Dance, a jazz-influenced balloon band and physical theatre from Komedia Kids are part of the line-up, as well as workshops by the likes of internationally-decorated Nigerian poet Inua Ellams and Shakespeare North trustee Stephanie Street. Before then, the theatre’s programme is eclectic enough to accommodate everything from a Heritage Opera version of Mozart’s Don Giovanni to performances by perennial summery favourites the Brighton Beach Boys.