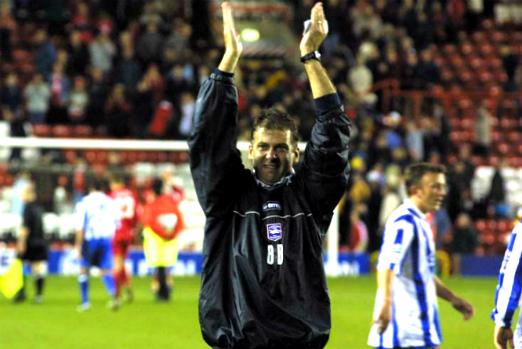 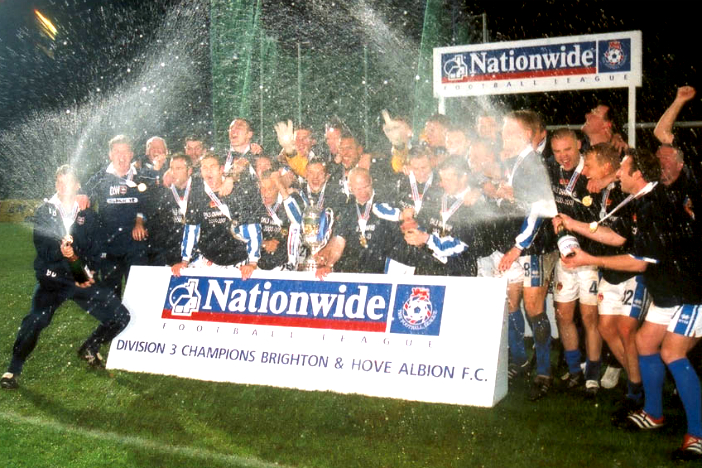 Had Bob Booker (far left, above, obscured by the flow of champagne) been a more recent coach or assistant top dog at Brighton & Hove Albion, as he was under numerous managers between 2000 and 2009, he would be a rich man at a Premier League club full of players earning fortunes, set for life with a year’s wages. As it was, the jovial grafter and top-notch coach – obsessed in his spare time by The Who and his pet dogs – frequently had to make the pragmatic choice between football and much less glamorous, better-paid jobs.

You won’t find many young footballers weighing up whether to stick with furniture upholstery or embark on a career in the lucrative modern game. But Booker operated in faraway times when he was offered a shot at being a professional with Brentford in 1978, having endured the uncertainty of an extended trial at the club who had spotted him playing little more than park football.

An entertainer with boyish good looks, Booker’s story would make a great Ken Loach film – not because of the sex-and-ale-and-rock-and-roll a lot of footballers from his era trade in, but more down to the exceptional ordinariness with which he won cult hero status. It’s not rags-to-riches stuff, but Booker’s earnings never matched his silverware, nor the adoration in which he is still held in Brighton, Brentford and Sheffield.

Even after his playing days were over, when he was helping the Albion to promotion during the agonising rebirth the club went through following a near-disastrous decline during the 1990s, his wage remained average. Witness to some of the most unforgettable times in the Albion’s history, his success owes much to persistence: he would drive the kit around in a van at 5.30 in the morning during an initial spell as Brentford’s youth team manager, when his outlandish dedication caught the eye of Micky Adams, who would later call on him while leading the Albion in a makeshift existence between Sussex University’s weather-beaten training pitches and the club’s temporary home at the ramshackle rural Withdean Stadium.

Booker won Adams over by sleeping in a bunk bed at the training ground, and went on to accidentally share a tot of his wife’s frozen breast milk during a bizarre half-cut domestic incident before the manager’s departure to Leicester, who were a couple of divisions above Albion in the early noughties. If you want more on that, there’s an extract from his newly-published autobiography here.

Starting with former England manager Peter Taylor, Booker went on to assist a mixed bag of Albion managers, including Mark McGhee, who will appear with him – and, hopefully, the whisky he is immortalised in song as drinking – when they are reunited at the Komedia.

McGhee, an uncompromising yet warm Scotsman, reached his zenith when leading a limited yet characterful Albion team to play-off final glory at Cardiff’s Millennium Stadium, just as the farcically strung-out campaign for Falmer Stadium needed the publicity of an underdog win in front of a worldwide audience (in the aftermath, there is footage of Booker ordering in and distributing boxes of pizza to the players, and getting pelted with various items.)

It’s hard to imagine Brighton without its stadium now, but McGhee (living in a marina flat) was hampered by much of the club’s money being constantly diverted towards the planning application for the then-dreamed of development, pulling off a minor miracle by narrowly keeping the team in the second tier of English football for a year.

A hero at Celtic in his playing days, McGhee is now Assistant Manager of Scotland, having been round the houses since leaving Albion after a dreadful follow-up season. Booker, showing an almost foolish loyalty which might mark him out as an incarnate Albion fan, served more managers and dropped into non-league football before returning as reserve team coach when Adams rejoined in 2008.

Adams’s second coming, alas, turned out to be far from biblical, and disastrous results saw the Yorkshireman and Booker sacked after less than a season, but what the hell. Booker will always be hallowed in Sussex, not least because he once did a bafflingly unexpected, fully-costumed impersonation of Freddie Mercury on the balcony of Hove Town Hall when thousands of fans lined the streets to celebrate one of the numerous Albion promotions he was involved with.

As nostalgia goes, his reappearance here will partly be a tribute to a time when Brighton’s footballers and their supporters shared an unbeatable closeness and a taste for overturning the odds. Not many sportsmen can claim free drinks for life in three different cities.

The new book, OOH-AAH: The Bob Booker Story, is out now

Pictures by Tim Colville at the Albion Album