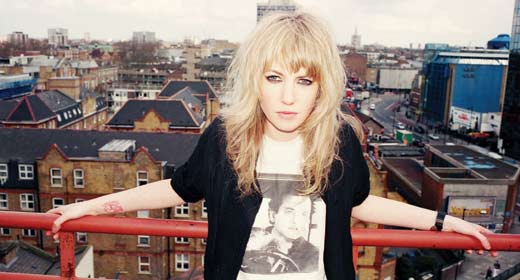 GALLOWS Concorde 2 Sat 2nd
A sickeningly good line-up to kick off Gallows’ tour with their newly released album Grey Britain, their first for Warner Brothers – distilled but raw as ever and promises of their powerful back catalogue being aired also. Not to be outdone, Rolo Tomassi return to Concorde 2 after their storm of a show supporting The Bronx last month, expect a frenzy of rhythmic riffs, keys and alluringly agitated vocal. Noise-fuelled Blackhole round up an enigmatic alliance, hardcore at its best. (LS)

THE SUNSHINE UNDERGROUND Coalition Sat 2nd
Following two warm up shows in Liverpool and Leeds, their first in 18 months, Brighton welcomes the riotous indie-rave of The Sunshine Underground on the first date of their spring tour. The Leeds based four-piece return at long last to play favourites from widely acclaimed debut album Raise The Alarm, as well as new material from an imminent follow-up. In the meantime, From The City To The Sea, a collaboration with electro duo FC Kahuna, is free to download from their website. (TR)

FRIENDLY FIRES Digital Sat 2nd
Without wishing to upset any Enter Shikari fans (we know you’re all at that difficult stage of life between starting big school and growing your first pube), Friendly Fires are easily the best thing to have come out of St. Albans. A longing to escape the boredom of their suburban surroundings is the main theme of their album, and in a live setting they play their spiky pop songs with the joy of people who have realised their ambitions. (DA)

GRAHAM COXON Digital Mon 4th
It’s been a fallow few years for this real life guitar hero but a vibrant 2009 suggests he has finally found peace with the bottle, his head and Blur. A couple of months after weaving some mercurial axe work onto Peter Doherty’s slight if agreeably composed solo album Grace/Wastelands, his seventh record, The Spinning Top, is out shortly. Then this summer will see the return of Albarn and co, a radical pop act surely set to be remembered as amongst Britain’s greatest musical creations. Tonight, don’t ask for Parklife but do expect a show brimming with energy, charm and epic guitar strangling. (BG)

BON IVER Brighton Festival Mon 18th
Exactly twelve months since SOURCE’s editor and this scribe stumbled across Justin Vernon on a hunch at the Great Escape, he’s back in town. Unless you’ve spent the last year living in a log cabin in snowboard isolation with only a dead deer for company and sustenance, you will know his critic-flooring debut, For Emma, Forever Ago, was recorded in just these forlorn circumstances. Tonight offers a rare change to revisit that masterpiece and if he plays Re-Stacks, a prayer for love surely sent from the Lord Jesus himself, expect an audible sigh from the entire audience at the close. Incalculably recommended. (BG)

KIMYA DAWSON Komedia Tues 19th
A couple of years ago we’d have written about Kimya as “one half of the Moldy Peaches”, but now the queen of anti-folk is perhaps better known as composer of the soundtrack to Juno. Her cute lo-fi songs fitted perfectly with the gentle cleverness of that movie and, sales aside, it’s been firmly stuck in Pirate Bay’s illegal download top 100 ever since. She’s shyly charming live, a real treat. (JK)

LADYHAWK Digital Tues 19th
If you ever got the chance to go on a date with Stevie Nicks and Cyndi Lauper in the 80s, you’d know that those girls could party. Karaoke bars, new-wave discotheques – it was awesome, if not a little tiring. If that chance never arose, then you could do much worse than be there when New Zealand’s Ladyhawke plays her infectious and expertly crafted synth-pop down at Digital. (DA)

YANN TIERSEN Concorde 2 Tues 19th
Fans of the wonderfully sentimental film Amélie will be delighted to hear the composer of its escapist soundtrack is coming to Brighton. The classically trained instrumentalist is known for his emotive piano and accordion pieces, although more recently upon taking up the electric guitar, Tiersen has followed his adolescent icons Joy Division and Nick Cave – touring and recording with his own band, breaking with his own traditions while still retaining the haunting yet joy-filled melodies he is coveted for. (LS)

ANTONY & THE JOHNSONS The Dome Thurs 21st
A recent edition of Jonathon Ross’ chat show saw the incorrigible egomaniac joined by a rum cast of Jason Donavon, Whoopi Goldberg (how?!) and Antony Hegarty. The sight of the half man, quarter woman, quarter extra-terrestrial singer looked sure to inspire the freshly unchained Ross to launch an obnoxious quip, like “What the fuck is that, ladies and gentlemen?!” Happily, he resisted and it says much for the Mercury winner’s position as marooned, ghostly crooner du jour that he now commands such mainstream turns, when not so long ago NME laughed at the idea he might one day adorn their sacred cover. (BG)

THE VALENTINES Prince Albert Sat 23rd
Due in no small part to the Cable Club team, there’s always a plethora of local talent on show at The Albert each month, and this gig promises to be one of the highlights in May. Despite the lead singer sounding like he grew up in close proximity to Alex Turner, the Valentines are Brighton-based and their buzzing, glam-tinged rock’n’roll seems ideally suited to their Saturday night billing. Support comes from Clayton Strange and The GaaGaa’s. (DA)

THE HOLD STEADY* Brighton Centre Sun 24th
*SUPPORTING COUNTING CROWS
Rock’n’roll is a young man’s game, right? To take the words right out of Depeche Mode’s mouth, WRONG! In the last couple of years, The Hold Steady have defied such previously unchallenged rock law with their booze-stained, rip-roaring bar-room rock thrash, fired by the kind of wry wisdom only an aging band (lead singer Craig Finn is 37) can perhaps muster. However, to SOURCE’s ears, their blue collar, Springsteen-lite racket inspires little more than confirmation that clichés like the above exist for a very good reason. If some old Yank duffer starts badgering you for speed tonight, call the police. (BG)

DEERHUNTER Concorde 2 Mon 25th
Bradford Cox (aka Deerhunter) is a peculiar looking chap. As a victim of Marfan Syndrome, which leaves sufferers with very long, thin limbs, he has no fear in presenting an awkward image to the world. The exact same, challenging approach the sublimely gifted Atlantan brings to his music. “I make really accessible pop stuff, but at the same time I have no problem making something creepy or just odd”, he explained off the back of 2008’s Microcastle album, a woozy but krautrocking and acclaimed splice of My Bloody Valentine, Pavement and The Velvet Underground. De Niro should be very proud. (BG)

METRONOMY Concorde 2 Weds 27th
Metronomy is great on record, but live they are amazing. That sentence might seem to have shonky grammar, but Joe Mount’s bedroom studio project really comes alive when Oscar and Gabriel join him on stage. Quirky dance music, the cheap synths get the choreographed moves to match. It all puts a sense of fun ahead of a wish to try and be cool – a standpoint more bands would benefit from having the balls to try. (JK)

TERRY CALLIER Coalition Thurs 28th
Old Tezzer has got a voice that suggests he’s the nicest man on earth. Maybe all those years in the wilderness – he worked in IT for well over a decade between his classic albums and his Gilles Peterson-led 90s revival – have kept him humble. His gentle folk soul songs suggest as much. Even though he’s getting on a bit now, he can still put on a hell of a show. A legend worth seeing before he jacks it in. (JK)