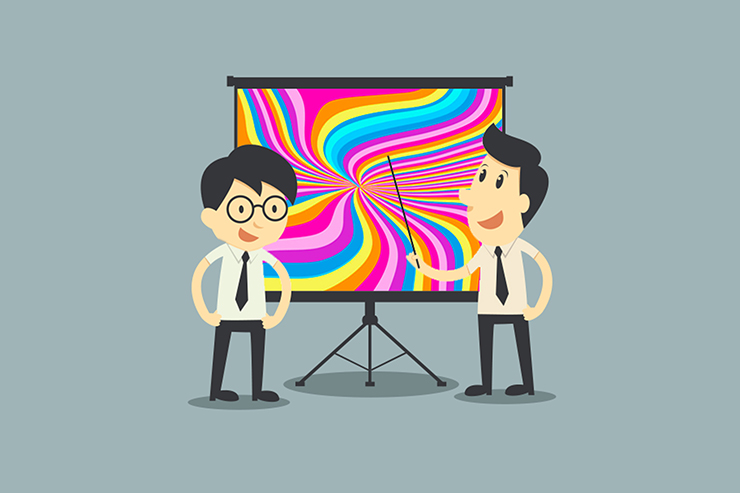 The Slide Show Must Go On

Which former Prime Minister used to eat 63 bananas a week? Which notorious cult leader composed an electro-jazz concept album? Did Hercule Poirot really continue to solve mysteries until the age of 129? Were the Tintin comics just a vehicle for imperialist Catholic propaganda? Why did Donald Trump create a board game all about himself?

These questions may read like whimsical search engine queries, but they’re also part of the blurb for an intriguing live show coming to Brighton Fringe this month. The Slide Show Must Go On, which runs from the 22nd to the 24th of June at the Rose Hill, promises to answer all the above in a series of comedic talks from two self-confessed geeks who have “an unhealthy obsession with PowerPoint”.

Other topics include science fiction’s apocalyptic downturn and the bewildering rise of conspiracy theories. Timely themes perhaps, but we’re assured these talks are as funny as they are fascinating. In the absence of live events we’ve all had plenty of time to spend on the internet, but maybe there’s a need for this kind of curated tour through the web’s more obscure corners. And your hosts for the evening seem well equipped for the job.

Chris Parkinson is one of the stars of the Poets Vs MCs spoken word battle and also the guy responsible for the walrus Gumtree advert which accidentally inspired a Kevin Smith film. His slideshow counterpart is Ben Bailey, a journalist, musician and the creator of some very strange games. They’re both regulars at The Catalyst Club – a long-running Brighton night that gives members of the public a platform to sound off about bizarre topics and pet passions.

This show takes a similar format – with slide shows and Q&As – but with more of a focus, allowing an even deeper dive into the strange underbelly of politics and pop culture. If you’re sick of the internet and ready for the real world to start up again, this could be the perfect halfway house.

Sometimes an article is a bit of a team effort, and those are tagged SOURCE Writers. If you’d like to be part of that team, hit the Contact link at the top and get your work on this website.
← PREVIOUS POST
The Sensemaker Review
NEXT POST →
Brighton Festival 2021
Mailing List
Recent Posts
Website developed in Brighton by Infobo
Copyright © Brighton Source 2009-2021
The Slide Show Must Go On - Brighton Source