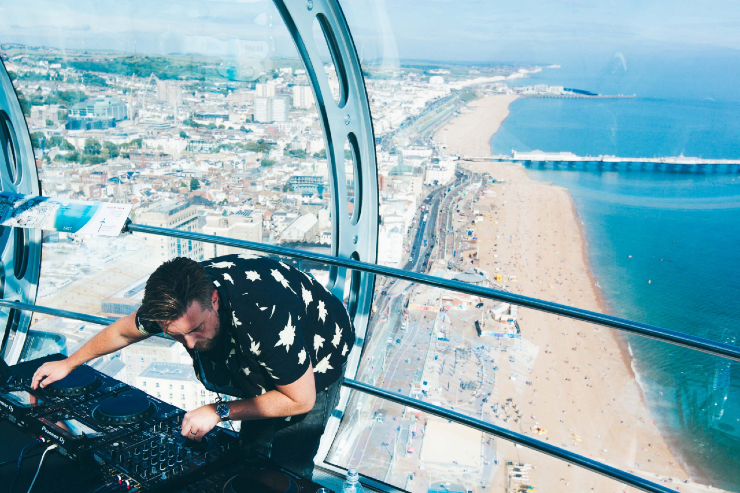 In a less plague-threatened, more tactile parallel universe, this weekend would be a busy one for Brighton’s clubs and bars. Markus Saarländer, the DJ and promoter of the popular Berlin night that has made its name by bringing a series of big-name house and techno DJs to the Green Door Store, has decided to improvise.

Working with the council and VisitBrighton, United We Stream is hosting live performances in unusual locations while gig venues are closed. Last weekend, the opening sessions included a takeover from record label Skint at the i360’s pod and the Big Beach Cafe, a set from Primal Scream’s Martin Duffy at his local pub and an appearance from scratch magician JFB on top of the Brighton Centre.

The idea is to demonstrate a “free-thinking, rainbow infused spirit” and raise crucial funds for the city’s night-time economy, cultural organisations and charities. “For small venue owners, musicians and artists, it’s devastating,” Saarländer told BBC Radio Sussex about their current predicament, underlining the difficulties being faced by revealing the impact it has had on his own night.

“For the last six years, we’ve been flying in some of the biggest names in electronic music to the city. We had a really big year ahead of us – we were looking to run parties in other cities and we’d just moved to a new home at Chalk. We had some really big names – and I and all of our residents had gigs all over the place.”

People can pay what they feel for the live streams, with 70% of the money going towards a Brighton and Hove night-time venues fund and the rest going to rough sleeping charity Make Change Count and local charities Grassroots Suicide Prevention and AudioActive. Saarländer suspects it will be a while before venues can count upon the full revenue of packed houses again.

“You’ll have two types of people,” he predicted. “There will be people who just want to go out and party, but most people will be reserved about going out to busy venues and spaces – and quite rightly so.

“People will be very cautious. There are ideas that some venues have where you can dance at a safe distance, but you’d need the really big venues for that. You want to be in a huddle with your friends, you want to meet new people, if you’re single you might want to chat someone up. I think it’s going to be quite some time yet before people will be confident to go out and for it to be safe.”

In the meantime, the programme he has overseen this weekend is as impressive as the launch line-up. Electro heroes Freestylers and Krafty Kuts are among those entering the Disco Bug van that Fatboy Slim has been known to joyfully play at this time of year, and there are more shows live from the Brighton Centre balcony.

Across the rooftops, Gaydio and clubnight Kinky Dangerous play from the top of Revenge, and the Beta Band’s Steve Mason will be thumbing through his records for a performance at the Better Half in Hove.

United We Stream Week 2, Friday 19th June – Monday 21st June. Starts 7pm, pay what you can. Make a donation and visit Brighton We Stream for full lineup and times.