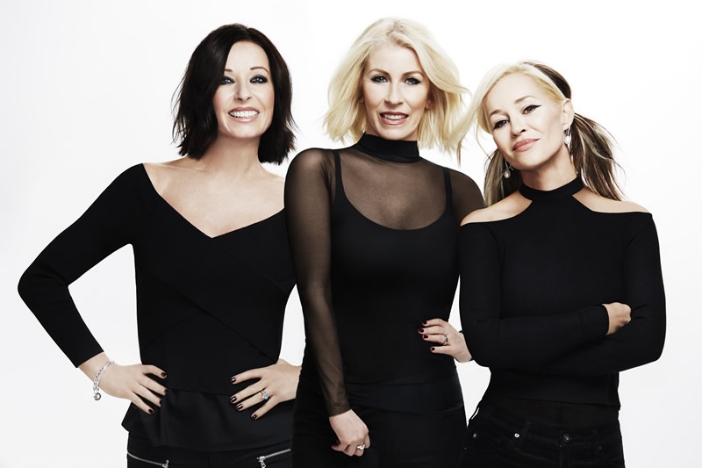 When the next series of The X Factor rolls around, remember this: the Guinness World Record-holding girl band with the most hits to their name aren’t a carefully marketed industry creation or yet another Simon Cowell project but the endlessly endearing, knockabout trio Bananarama, a group who never did anything by the book.

This year’s ‘Original Line Up Tour’ (“All The Girls. All The Hits. All The Hair.”) not only reunites the true hit-making trio of Sara Dallin, Keren Woodward and Siobhan Fahey but does so, as far as UK audiences are concerned, live on stage, in public, for the very first time. OK, Bananarama’s origins lie in impromptu vocal performances on the post-punk toilet circuit back at the dawn of the 80s but they never capitalised on their first waves of chart success by touring.

So tonight’s Brighton Centre spectacular is the second of their visits to town this season, a By Public Demand extra date after the tentatively booked first set of tickets flew out. The venue is fairly close to capacity this time too, a mix of older fans and excitable families, many already bopping about in light-up red devil horns nabbed from the merch stall. As the warm-up DJ gives way to flickering back projections, a four-piece live band warm up, jamming along to sampled vocal snatches (“Guilty!”). The stage-cloth drops, revealing Woodward, Dallin and Fahey in angular, sparkling, black, red and white suits, shimmying into ‘Nathan Jones’, their Supremes cover that, on its 1988 release, stole the Most Successful Girl Group crown from… The Supremes. Crafty that.

The haphazard dungarees of old are long gone but Bananarama are still merrily messy. They’re choreographed, sure, but only on their own terms, and if that means wandering off mid-song to invent their own moves at some random end of the stage, then that’s what they’ll do.

Their voices hold up though, evidenced very early on when they throw the genius and, as they’ve revealed in recent interviews, deeply sad ‘Robert De Niro’s Waiting’ away as only the show’s second song. Their finest single? Discuss. That still leaves the giddy delights of ‘Cruel Summer’ and ‘Shy Boy’ and their various Fun Boy Three and Stock, Aitken And Waterman collaborations to come though.

In fact, there are very few of their hits that Bananarama don’t play tonight (notable exception, 1988’s ‘Love, Truth And Honesty’), including a run through debut, Swahili-language single ‘Aie E Mwana’ and early flop ‘Cheers Then’. The latter brings the only element of cheese to the show, as Fahey exits the stage mid-song (telegraphing the way she left the band at the height of their SAW success), only to re-enter on cue as Dallin and Woodward take an unexpected stab at her subsequent band Shakespears Sister’s all-conquering ‘Stay’.

That Dallin and Woodward have kept the Bananarama name going without a break throughout the intervening years (no mention tonight of temporary stand-in Jacquie O’Sullivan, sadly, or indeed Lananeeneenoonoo. Ask your parents) is acknowledged with minor 90s dance hit ‘Preacher Man’. “One of my favourite Bananarama songs of all time,” announces Fahey, magnanimously, “It was done after I left, alas.”

Having been on our feet the whole evening, we finally reach the end with an encore of ‘Na Na Hey Hey Kiss Him Goodbye’ and, the high-point of their Stock, Aitken And Waterman productions, an extended ‘Love In The First Degree’. It’s impossible to keep track of all the hits in between, or indeed to stop dancing. As we said before, record-breaking.

Stuart Huggett grew up in Hastings, writing fanzines and blogs about the town’s underground music scene. He has been a regular contributor to SOURCE, NME, The Quietus and Bowlegs. His huge archive of magazines, flyers and vinyl is either an invaluable research tool or a bloody pain. He occasionally runs tinpot record label Dizzy Tiger, DJs sporadically and plays live even less.
← PREVIOUS POST
Street Source No.22 - Whitehawk
NEXT POST →
Liam Gallagher Review
Mailing List
Recent Posts
Website developed in Brighton by Infobo
Copyright © Brighton Source 2009-2021
Bananarama Review - Brighton Source