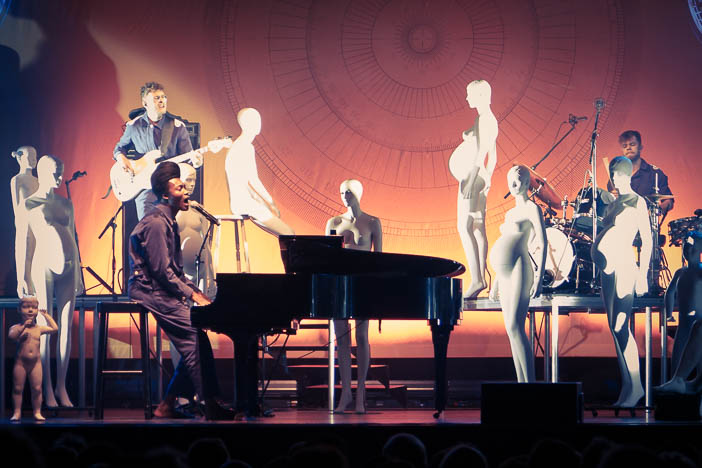 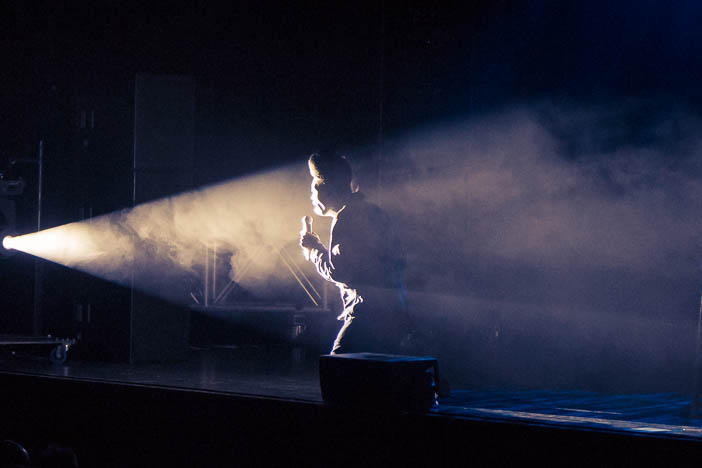 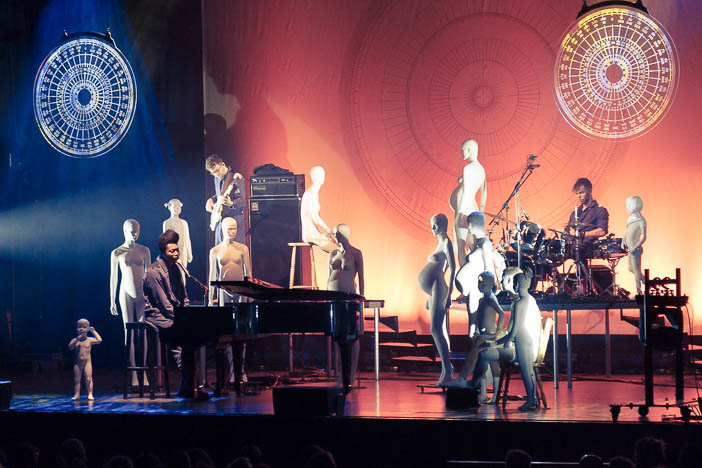 We’re one song in, and Benjamin Clementine seems frustrated. He stares into the crowd, his imposing 6 foot 4 height given a six inch boost by the astonishing cockatoo crest of backcombed hair he’s sporting. His glassy, otherwordly gaze holds us rapt, but the silence lingers too long, rapidly becoming uncomfortable. “I’m waiting for you to sit down,” he finally says to some latecomers grimly. We laugh, but we’re not sure how to take it. There’s a hint of steel to his words.

Tonight is the opening date of Clementine’s UK tour, in support of his recently released second album ‘I Tell A Fly’, the follow up to his amazing 2015 Mercury Prize winning debut. The record is a strange beast – 11 songs containing about 50 musical ideas, borne from a creative mind with no desire to be reined in. Apparently this self-produced and largely self-performed album raised grave concerns at the record label. Clementine had to fight pretty hard to get it released. 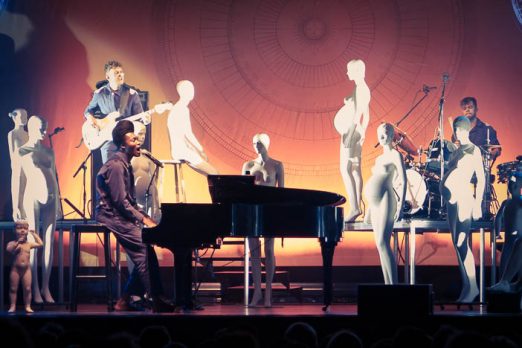 Tonight we finally get the chance to see this album performed in a live scenario, and it certainly impresses. The stage set is populated by thirteen white clothes dummies. Clementine and his two man backing band are clad in dark blue boiler suits. Collectively they supplement their musical duties with non-speaking theatrical roles, playing aliens in a dramatic staging of the album. Mid-way through ‘By The Ports of Europe’, all three players abandon their instruments and jump off the stage, passionately shouting the song’s looping ‘Porto Bello!’ mantra at us, unaccompanied. In this somewhat Brechtian moment they become refugees begging entry to our beautiful port. They stop dead and turn their backs. We applaud, only to be cut sharply as they turn and resume their keening refrain ever louder. ‘PORTO BELLO!’ they insist. There is nervous laughter in the crowd.

Not for the first time tonight, we feel a sense of unease. Are the singers about to come careening down the aisles? Should we sing along, or would that be the wrong thing? Some brave souls start to mutter the refrain, but the crowd is reserved, and the singalong tipping point isn’t quite breached.

‘I Tell A Fly’ is not an album that invites its listeners to sit back and relax – and by the same token this performance has a similar edgy thrill. We enjoy the slight discomfort of knowing our night is in the hands of a sternly confident yet unpredictable performer who, from the outset, has communicated very clearly to us that he does not crave our delighted approval. He asks us to sing along with him on ‘Condolence’ before tutting at our vocals. “It’s not a football match.” He asks us what’s so good about Brighton, then dismisses our every suggestion. (“The sea.” “Huh, call that a sea?”) He does, however, seem particularly tickled to learn from an audience member that we’re called Brightonians. For the rest of the show he addresses us rather imperiously in this fashion. “So anyway, Brightonians…” At the start we’re uncertain about where all this is going, but eventually we realise Clementine is, effectively, flirting with us. 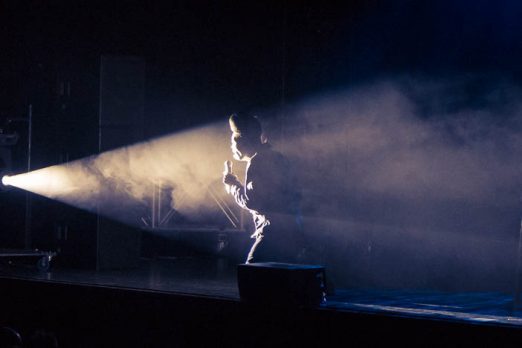 The songs themselves are delivered with characteristic conviction. Clementine’s vocal is astonishing – a controlled and pitch-perfect instrument of passion, whose phrasings add extra nuance to album tracks. For ‘Phantom of Aleppoville’ his ghostly chattering and twittering, a far more ambient sound effect on the record, becomes the insistent, demented voice of nightmares. At the end of ‘One Awkward Fish’ he kneels in the glare of a spotlight, clutching one of the clothes dummy props to his breast as he howls the closing phrase, casting the fate of the song’s ambiguous “Turkish boy from Camberwell” as a horror movie cliffhanger.

Songs like ‘God Save The Jungle’, obviously a paean to Calais (‘lorries are chariots, railways are stairways’) evoke the migrant crisis without feeling like a political tirade, as everything is essentially framed from a personal point of view. This is empathy for the world seen crucially through the prism of first-hand experience; the album addresses the Syrian crisis, but is ultimately drawn from Clementine’s own feelings of rootlessness (raised in London he spent a long spell homeless and busking on the Paris Metro), and was more specifically inspired by a line on his US travel visa which described him as ‘an alien of extraordinary abilities’.

For all the theatrical ambitions of this show, however, it must still be said that Clementine is truly at his most beguiling when seated at the piano, simply delivering his songs at full throttle. Returning to the stage for a triumphant encore, he gives an absolutely spellbinding rendition of non-album track ‘Great Lafayette’. Without his band, we can overlook all other distractions and fully appreciate that rich voice as it soars over his stark piano stylings. It provides us with the highlight of a quite remarkable show.