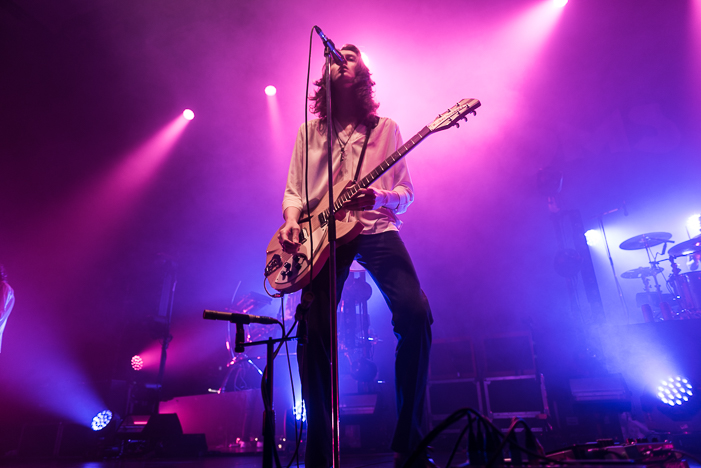 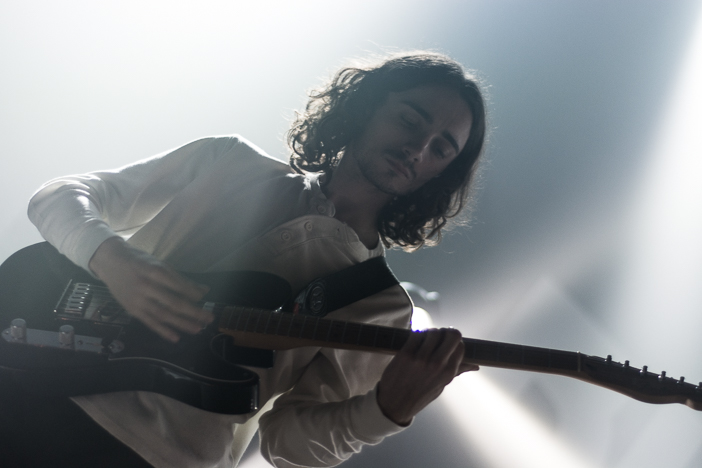 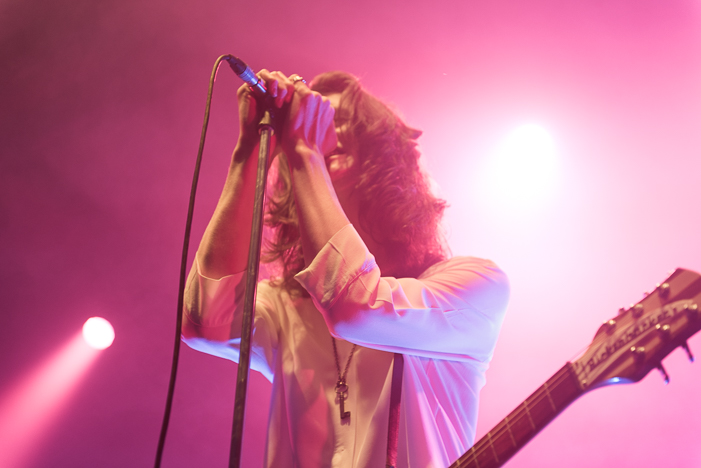 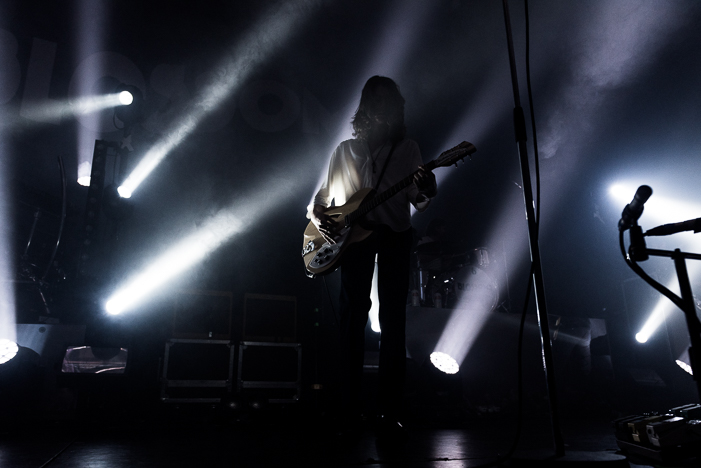 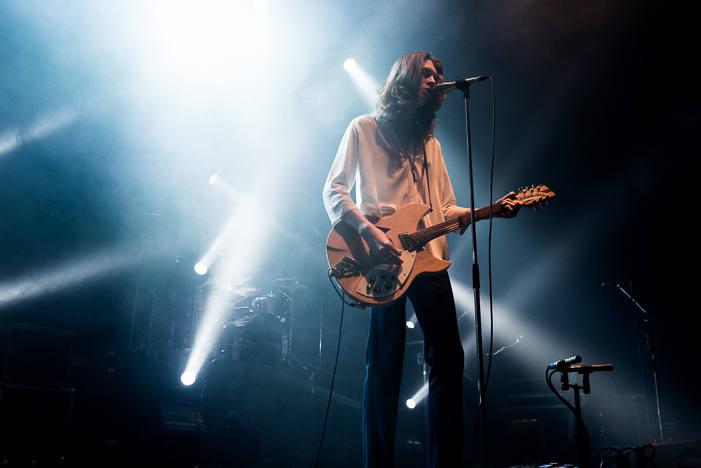 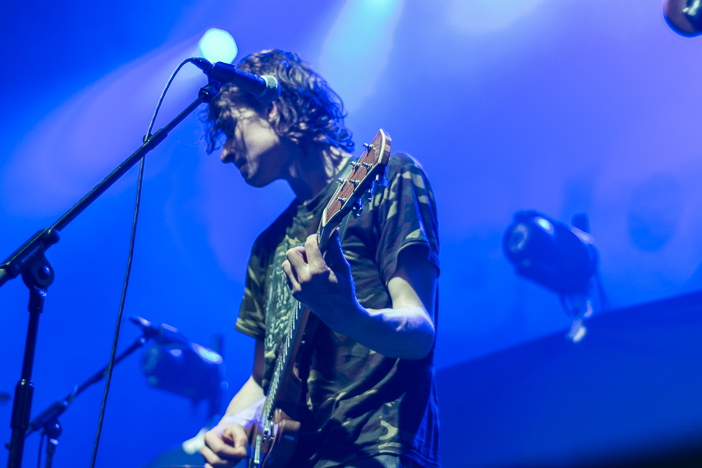 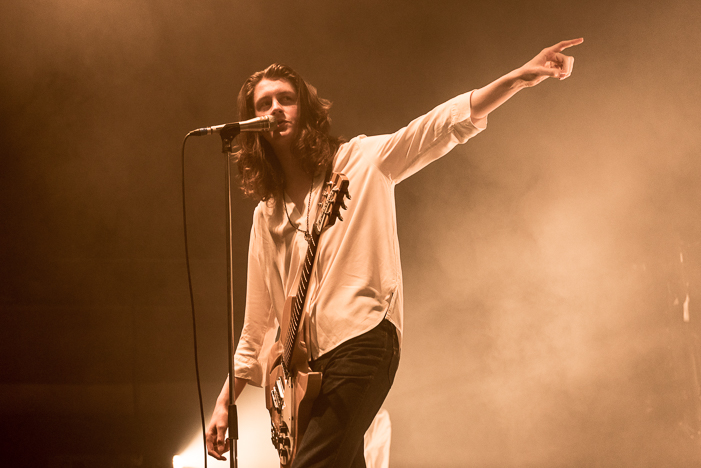 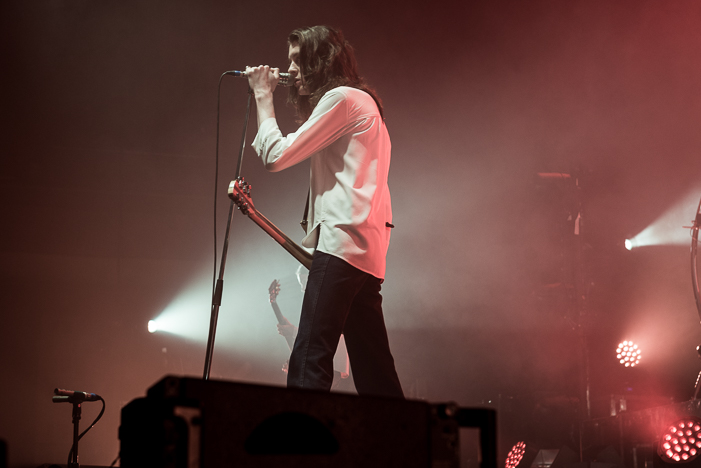 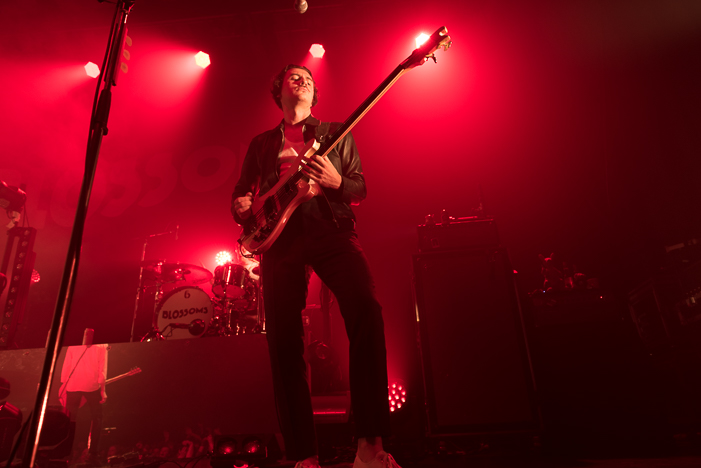 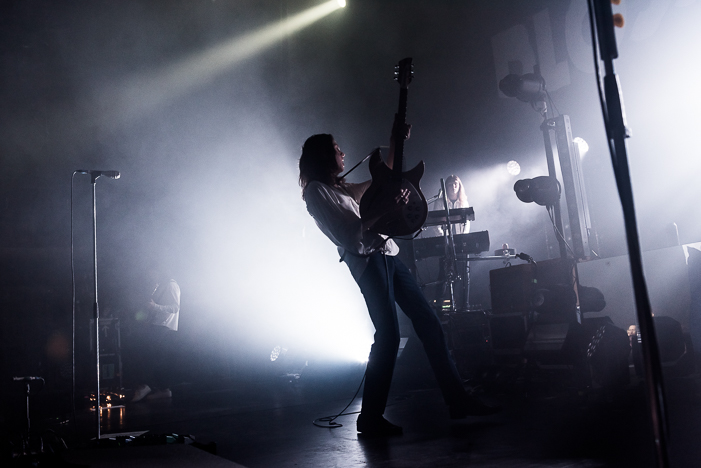 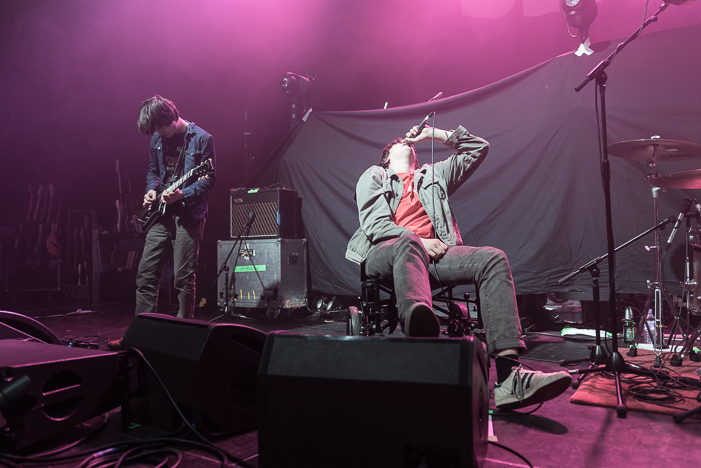 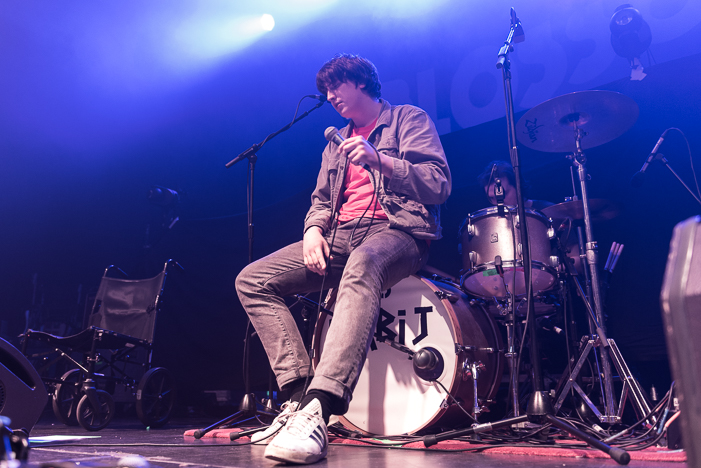 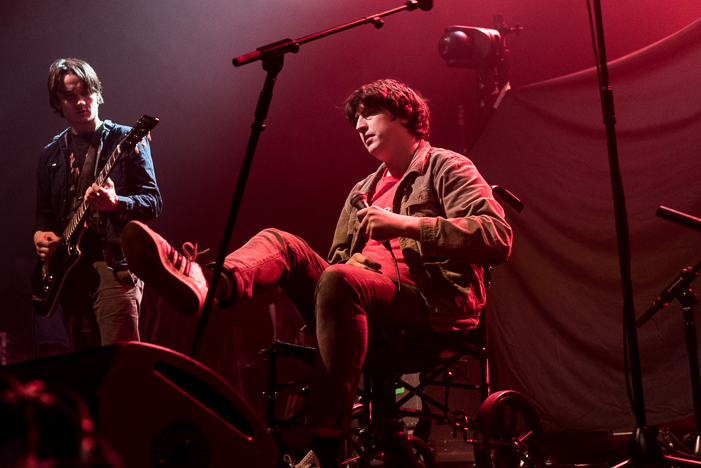 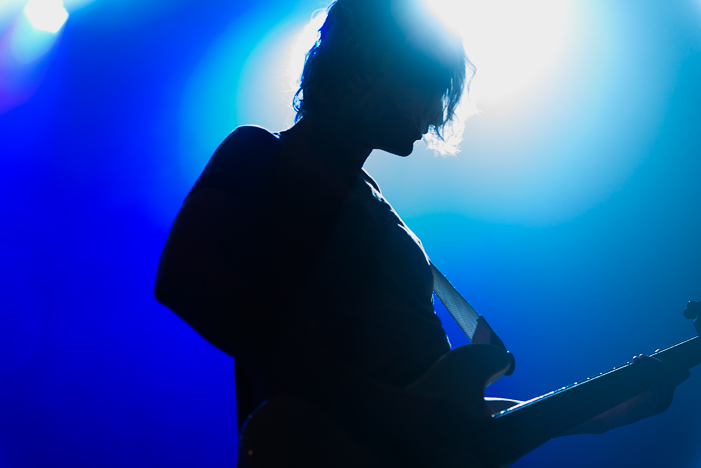 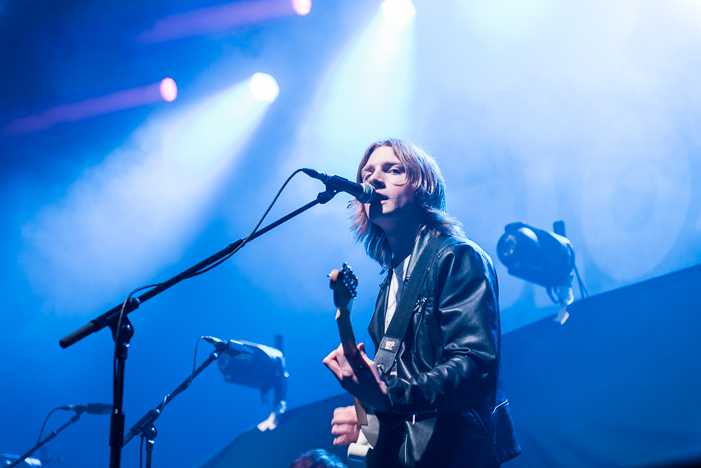 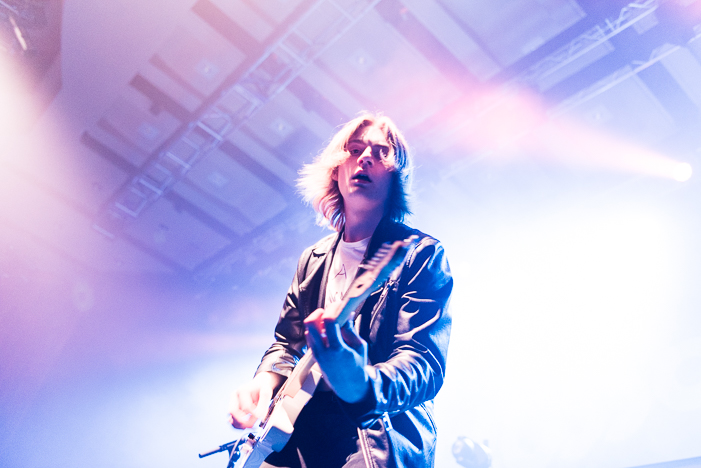 First to take to the stage of the VO5 NME tour was self-assured Stockport grunge rocker Rory Wynne. Watching him play, it was hard to ignore the influence of Nirvana. With a blonde front parting, Rory himself has a degree of Cobain about him, but it was the sound more so than the look that he pulled off the best. Though not quite in the same league as the King of Slackers, his songs managed to sound original and fresh, with gravelly vocals in full force. As Rory left the stage, he dropped his guitar and stormed off with the sort of swagger you would expect from a grunge rocker, minus any guitar smashing.

Next up was the punky and anarchistic Cabbage, not a sentence you expect to hear everyday admittedly. Entering the stage in a wheelchair, lead singer Lee Broadbent appeared entirely unaffected by his recent injury, delivering a potent performance. The band’s rebellious edgy music had striking similarities with punk and elements of grunge, given a unique twist. When vocal duties were switched to Joe Martin, the khaki-clad guitarist at one point undressed down to his trousers and gave a performance that was not unlike Iggy Pop, both in musical style and physical posturing. They seemed an odd support choice for Blossoms given the contrast in styles, yet the crowd appeared entertained nonetheless.

Continuing with plant-themed names, it was now time for Blossoms to take the stage. Dressed all in white, the long-haired cavaliers from Stockport took up their positions for what was always going to be something very different from the previous acts. This proved to be the case straight away, as the band began playing the soft melodic modern Britpop that we’ve become accustomed to. Such was the passionate singing of the adoring crowd, singer Tom Ogden often had very little to do. They actually started off slowly, although when they really got going it was a thoroughly entertaining throwback to the era of Britpop, with lyrics that deal with romance and upbeat guitar melodies flowing effortlessly.

One thing Blossoms really exceed in is their use of keyboards, giving the polished melodies a pleasant texture. While the keys were reminiscent of The Charlatans or The Stranglers, the vocals were much more in the vein of Suede’s Brett Anderson, which made for an interesting blend of music that pretty much defines the sound of Blossoms. There was some quality crowd engagement throughout the gig, especially during Tom Ogden’s solo medley, which covered the likes of Oasis and George Michael and involved dedicating a song to a member of the audience.

Blossoms always seemed at ease, with even B-sides getting belted out, which is a testament to how far Blossoms have come. This proved to be a thoroughly enjoyable evening and we’d be happy to welcome Blossoms back down to Brighton again anytime.

Sometimes an article is a bit of a team effort, and those are tagged SOURCE Writers. If you’d like to be part of that team, hit the Contact link at the top and get your work on this website.
← PREVIOUS POST
Street Source No.13
NEXT POST →
Sun Ra Arkestra Review
Mailing List
Recent Posts
Website developed in Brighton by Infobo
Copyright © Brighton Source 2009-2021
Blossoms Review - Brighton Source