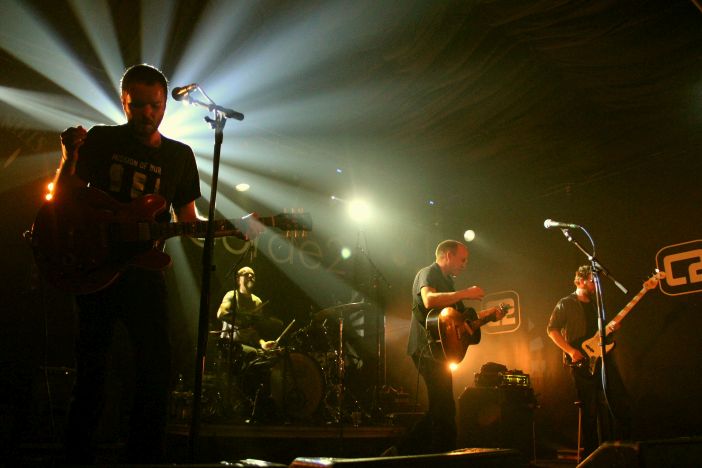 It may have been ten long years since Brakes released their debut album ‘Give Blood’ and four since they last played live, but there was no lack of excitement about their return to the stage. From the moment they announced their gig at the Concorde2 the build-up was one of happy expectation. People came from all over the country, indeed from all over the world (one even flew from Australia) and the packed out venue seemed like the only place to be on Friday night.

Brakes are a remarkable band, each of their four members having a long musical pedigree of their own. It is testament to their talent that what started as a side project became such a success. And while a lot of their audience might have come to them via British Sea Power, The Electric Soft Parade or The Tenderfoot, they also boast a lot of fans who discovered and love Brakes in their own right.

Loud applause greeted the band as they took to the stage and opened with ‘The Most Fun’, a song about life-changing events triggered by MDMA. They then rattled through the setlist with their erstwhile energy and sense of fun intact. Early in the evening frontman Eamon told us they planned to do 30 songs. For most bands this would involve digging in for the best part of the night, but part of Brakes’ unique charm is their ability to create and execute – so many are one or two minute songs. Constructed beautifully the lyrics get straight to the point, be it the stupidity of people and politicians or the pain and joy of love.

The set spans all of Brakes’ studio albums but is threaded with every track on ‘Give Blood’, their magnificent debut. Towards the end of the night Eamon acknowledges the passing of the last decade by listing each of the individual band members’ injuries. No one watching would have guessed at the physical toll exacted by the band’s passion and energy and fearless lack of restraint.

Through the show they got the smiling crowd up on their feet dancing and the feeling of sheer joy in the room could have lifted the roof had the venue not been mostly built under a cliff. It was one of those special gigs where it seems everyone in the audience is gonna be friends for life.

Nobody wanted the gig to end and when the band came out to play the encore, ‘Porcupine Or Pineapple’, they were greeted with a pineapple thrown on stage before they had the chance to carefully (remembering past disasters) throw their own into the crowd. The final song was ‘Huevos Rancheros’ which saw Eamon jumping around the stage like a four-year-old and the rest of them having the time of their lives.

As everyone shuffled out of the venue, almost reluctant to leave, we heard one beaming punter remark: “It was like as soon as they came onstage someone dropped a massive happy pill on the whole crowd.”

The most fun? Definitely.