The stage is all set for Fontaines D.C. as a sold-out Haunt eagerly waits to kick off the long Easter weekend.

There’s a palpable sense of anticipation in the crowd; perhaps unsurprising given Fontaines D.C.’s spectacular recent trajectory. They played The Great Escape last year and by late December most music journo’s were penning their name as they compiled their ‘Big in 2019’ watchlists. This is the last night of their UK tour and the reaction has been fevered across the country. A US tour with fellow indie-punk superstars Idles follows.

With their debut album Dogrel making a splash in the album charts (#9 in the UK, #4 in the Irish Charts), it seems that the post-punk boys from Dublin are set to ‘make it big’ (a reference, if you’ll allow your reviewer the pleasure, to their song… ‘Big’ – a snarling look at the capitalistic gentrification of their home town and inhabitants).

The boys launch onto stage to the sounds of the ‘Boys from the county hell’ by progenitors and kindred spirits, The Pogues. Frontman Grian Chatten is all nervous energy; strutting to the mic, retreating, repeating. The opening chords to ‘Hurricane laughter’ are greeted by a crowd surge, and a few faces look surprised that they’ve launched straight in with one of their bigger songs…

All of a sudden that ‘nervous’ energy has a direction and purpose, Grian blocking out the ambient noise with a finger in his ear, eyes briefly closed during the breakdown. The repeated, deadpan mantra – “there is no connection available” – resonates and is sung back in unison by the eager crowd. The big choruses are delivered into a sea of outstretched fingers and open palms all night. 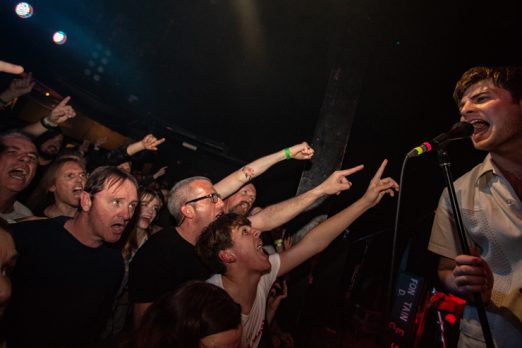 There’s no let up as we’re straight into the juddering, knees up of ‘Sha Sha Sha’, probably their most direct and danceable punk song. By the time this rolls into ‘Chequeless Reckless’, this juggernaut is well and truly gathering momentum.

In-between songs Grian continues like a boxer weighing up his prey, ducking and diving, hands forever moving. Sonically, there is a beautiful cohesion to the set. At times there are strong nods to Gang of Four post-punk – all sharp sounds and flat, repetitive vocals. Think perhaps if the Fall had a beautiful tangle with the abrasive end of Parquet Courts.

Album tracks that are new to most people’s radar actually sound way bigger than we had anticipated – ‘Television Screens’ and ‘Roy’s Tune’ both take it up a notch or two live.

Towards the end of the set your reviewer’s notes became noticeably sparse, as we got sucked into the oscillating mosh at the front of the Haunt. Notes included “floor bouncy” “Liberty Belle – anthemic” and “Too Real – got heavy”. (For what it’s worth, ‘Liberty Belle’ was our set highlight.)

And it did indeed get heavy. We’re truly impressed with the number of songs that we’ve name-checked in what was just a 40 minute set. They inspired the kind of reaction bands achieve when they mean something to the people out in front. For everyone there, it felts like Fontaines DC star is set to burn bright and we’re glad we were there as they tore through the Haunt.

Words by Ashley Laurence
Photos by Jamie MacMillan – a big thanks for the pics, as your writer stupidly managed to lock both himself and camera out of his house. Not for the first time, either…