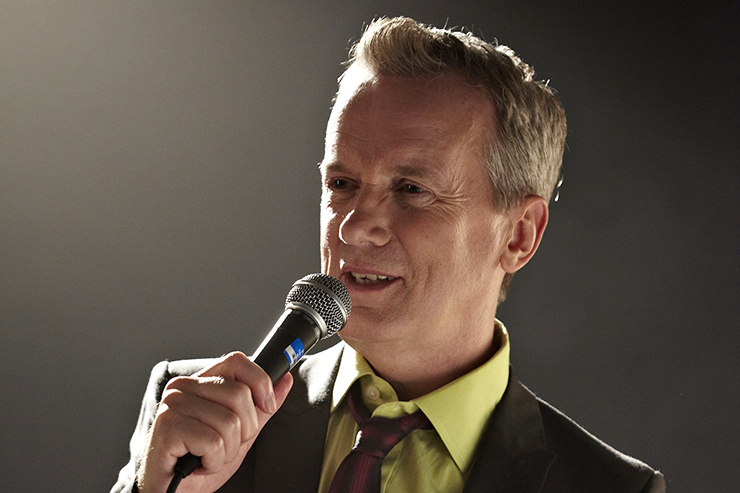 With his Room 101 series decommissioned by the BBC, Frank Skinner is currently best found on Absolute Radio each Saturday morning exchanging witty banter with Emily Dean and Alun Cochrane (the show is UK commercial radio’s most popular podcast). However last Sunday saw Frank back to his day job, performing his ‘Showbiz’ stand-up show at Brighton’s Theatre Royal. It’s a venue that most would agree has seen better days, but definitely still has its charm; could the same be said of Frank?

The ‘Showbiz’ title felt a little loose… Frank wasn’t afraid to stray from the path, but he clearly had a path in mind as he managed to cover a range of disjointed subjects from back pain to the Krankies to daisy chaining (probably best not Google that). That said, it felt more like a collection of musings, most of which really stemmed from getting older. It’s not clear why we see stand-up as a young man’s game these days when the comedians of the 1970s were generally circa 50-years-old. Anyway, Frank is definitely not past it and still excels as a quick thinker when it comes to off-the-cuff gags.

Two seats remained empty in the front row, despite it being a sold-out night (as Frank pointed out, only to be heckled with “is that what they told you!?”). But he thrives on this: a couple left early (before the encore) abandoning a plastic cup on the stage, which he threw angrily at their empty seats (“Fuck ’em!”). It’s these spontaneous moments that are Frank’s forte.

Although at times it felt a little like this Brighton audience wasn’t one of his strongest, he was more than capable of keeping the laughs coming. As is traditional with a tour of this kind, the comedian managed to shoehorn in some local references, mentioning the i360, Horsham and randomly saying “Arundel” for no apparent reason, but the big laughs came from bits discussing the ‘Strictly Curse’ (the filthiest take on it, of course) and the fact that his age has allowed him to finally be free from the shackles of… well, being a lad on heat.

His 90s lad comedy days may well be behind him, but jokes about sex from behind are not. A decent night out for anyone who likes to laugh and is preferably over 18.

Sometimes an article is a bit of a team effort, and those are tagged SOURCE Writers. If you’d like to be part of that team, hit the Contact link at the top and get your work on this website.
← PREVIOUS POST
The Murder Capital Review
NEXT POST →
Alternate Realities 2019
Mailing List
Recent Posts
Website developed in Brighton by Infobo
Copyright © Brighton Source 2009-2019
Frank Skinner Review - Brighton Source