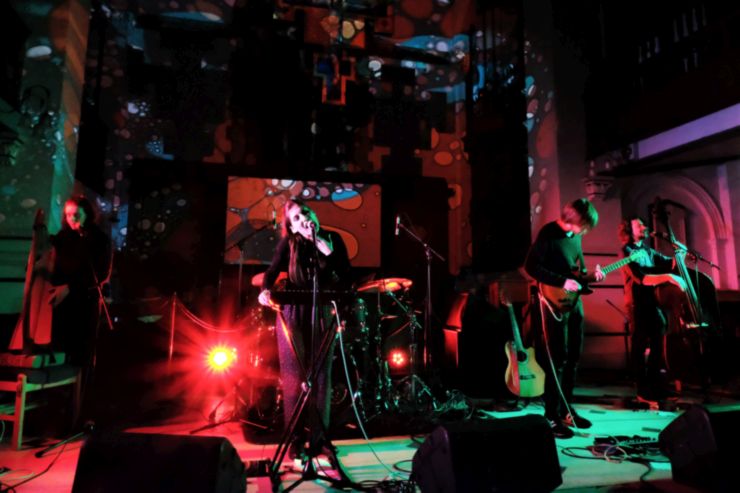 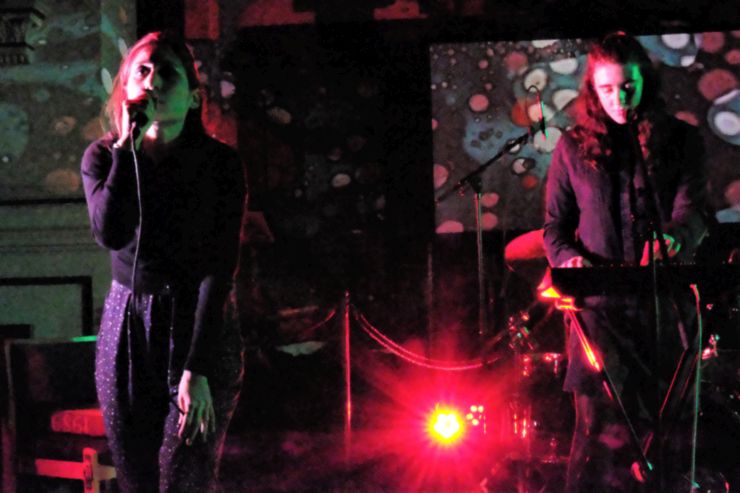 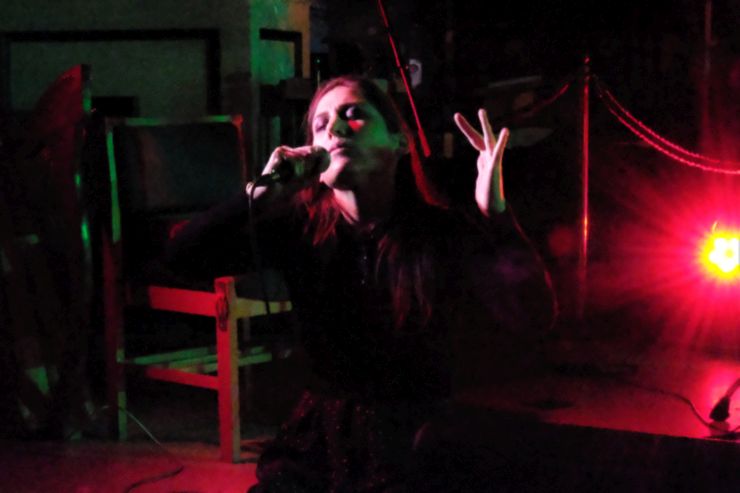 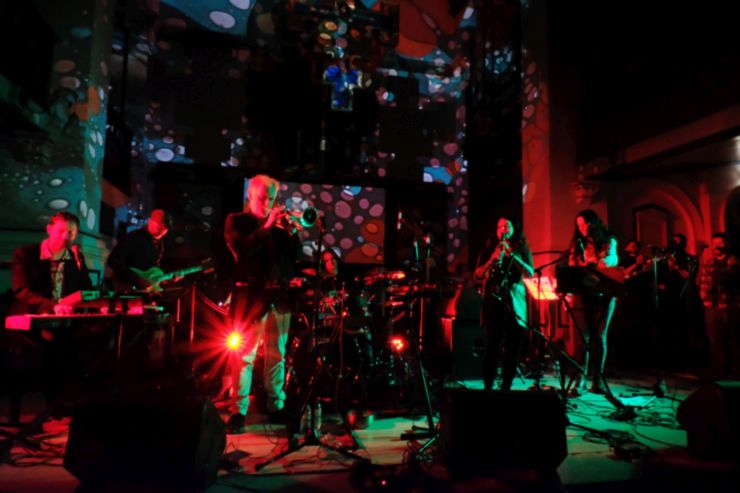 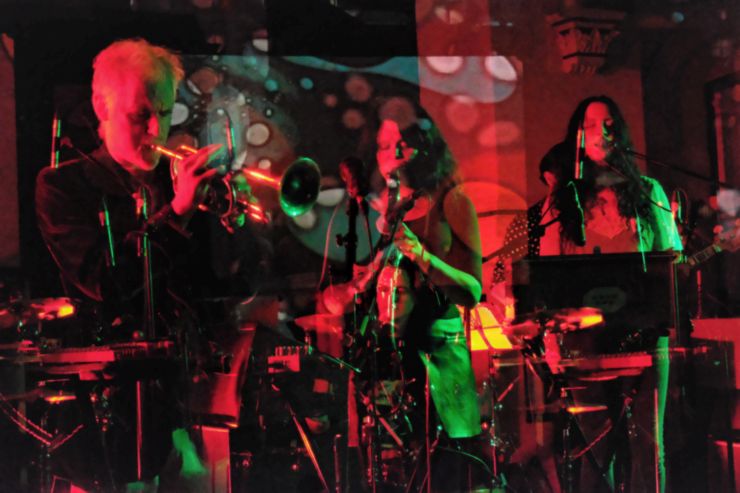 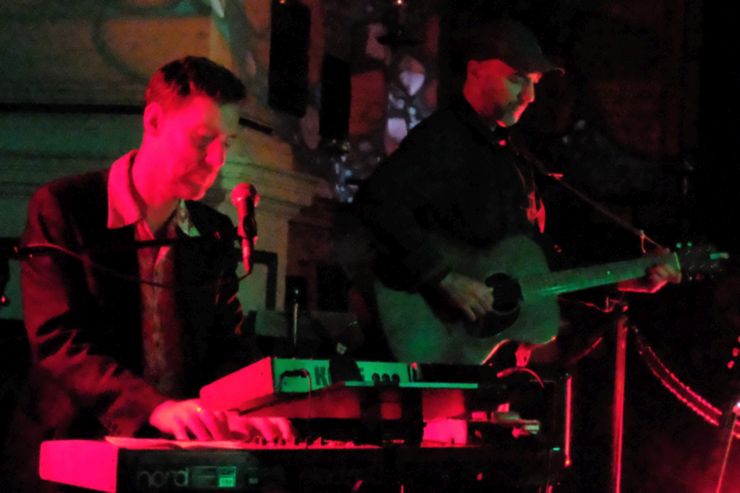 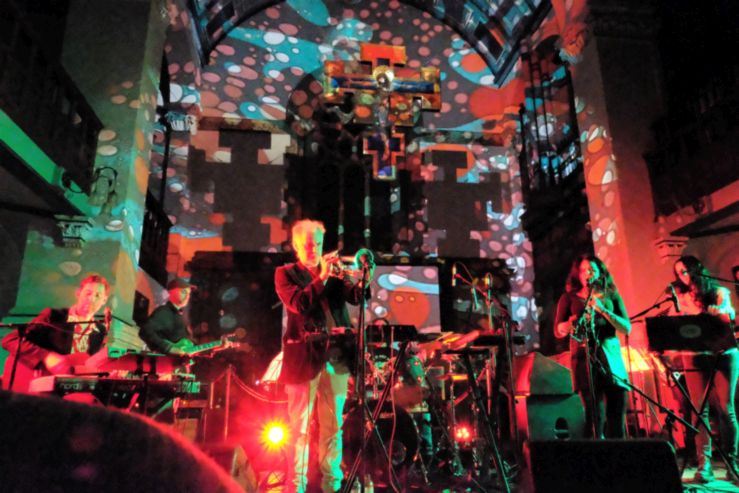 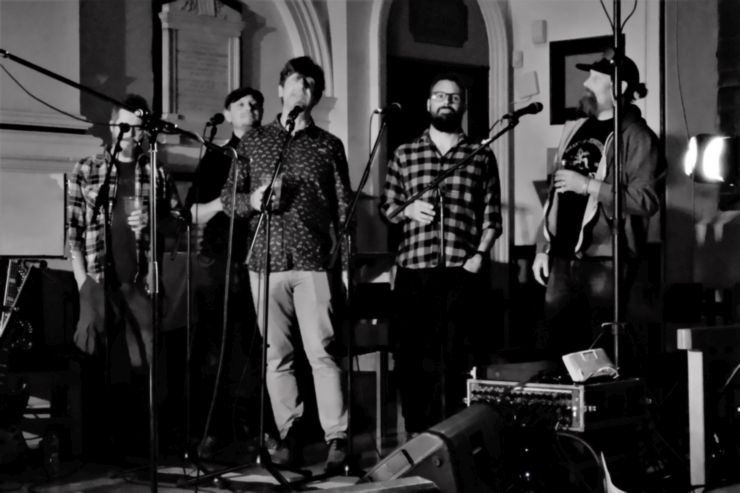 Melting Vinyl Promotions have had support from the Arts Council this summer to broadcast a series of live music events from the beautifully evocative St George’s Church in Kemptown. This concert featured two local bands who should be much better known, and was the first of this series to include a live audience.

Opening the event were the Duck Pond Sailors, a south coast Sea Shanty quintet who sang songs about drinking and their wannabe fishermen lives with great gusto. You can catch them in various pubs around town.

Oddfellow’s Casino are a Brighton institution who have been playing lead Oddfellow David Bramwell’s beautiful pastoral psych-folk music for more than twenty years. They sometimes play as a small group, sometimes in a larger almost orchestral form. Tonight there were seven musicians – including members of The Cravats, Bevis Frond, Hamilton Yarns, Insides and Brighton Film Quartet – who were playing together for the first time since before the pandemic. Their set featured songs from across their history, including old favourites like ‘Winter Creatures’ from the sublime 2004 album of the same name, and the beautiful ‘O, Sealand’, a would-be national anthem for the semi-mythical island kingdom off the coast of East Anglia. Bramwell has not slowed down of late, and the band have released four new albums over the course of lockdown, including their latest, the excellent ‘The Cult Of Water’, some of whose songs also featured in tonight’s set.

Greenness are a newer band, although they’ve been playing around Brighton for several years. They have two excellent EPs to their name, and a new album ‘Sunrooms’ which has just been released to their crowdfunder subscribers and should be available to the world soon. We’ve heard the album and can safely say it is a bit of a classic, featuring the band’s trademark mix of folk, jazz and psychedelia to provide an innovative setting for Cess Greeness’s mesmerising vocals.

Originally a duo, Cess and Graham augmented their live act tonight so that they could recreate the sound of the album, which they played in full. We spoke to Cess following the gig.

So how did it feel to play in a church tonight?

Cess Greenness: Very surreal! Especially with the psychedelic light show by innerstrings, that was quite special. Saint George’s is such a beautiful space. When we soundchecked the vocals, as I started singing I said “yeah, that’s a good amount of reverb” to Matt the soundman, and he smiled and told me, “I haven’t even added any yet”. Churches are great for that!

How does it feel getting back to playing live?

With the full band, we’ve only played two shows since lockdown. The first one was in London two weeks ago, at the Saint Pancras Old Church (I guess we’re a church band now?). That first gig was very exciting, but I also felt nervous after such a long break, and also because we’d never performed all together with the new bandmates. But after a few songs, I eased into the set and started feeling the magic again. Last night already felt much easier and it was just pure joy to feel at home on stage again.

Where did you find your band?

Originally, we put a full band together for our Cyclicity EP release party back in 2018. It was supposed to be a one-off thing but our drummer, Conor Bradley, has stuck with us ever since. With the pandemic, we didn’t get to play or practice together for the whole of 2020 and other bandmates moved to pastures new, so we had to audition two new members: Esme Anderson on harp, keys and backing vocals, and Alfie Weedon on double bass and backing vocals. We met through mutual musician friends, as they also play with many other acts on the Brighton scene. We started rehearsals as soon as practice rooms reopened, about six months ago.

Do they play on the album?

No. We started working on Sunrooms 2-3 years ago, before this band was put together. We’d always planned to record it as a duo in our home studio, in the same way that we made our previous records, and with the multiple lockdowns it was easier this way. In future though, we’d love to make a full band record! Maybe the next album?

Did that present a challenge when playing the album live?

We were really grateful to have the band actually, because the way we arranged and produced our album is multi-layered with lots of instruments and sound effects that would have been impossible to replicate live as a duo without backing tracks. With guitars, synth, drums, harp and bass plus vocal harmonies, we were able to recreate a full sound similar to the album version on stage, but the live set also has its own distinctive flavour with each musician bringing their own style to the mix.

And that’s something I love, because listening to a record alone at home on headphones is not the same experience as seeing a band live, it’s a very different energy, so you might as well adapt the set to fit into the context of a unique show and be creative with it. Also, every performance is different, and that’s a good thing! If each gig was exactly the same as the one before and as the studio version, touring would get a bit boring!

When will the album be released?

At the moment we are only making it available to the supporters of our crowdfunding campaign, who have massively helped us cover the costs associated with making an independent release – a dream come true! It is still open for pledges, and every backer giving £10 or more instantly gets a digital copy of the album including all songs and some bonus tracks. Higher tiers also include other rewards such as CDs and vinyl preorders – we’re doing a limited run that should be ready in the new year.

It’s a very exciting time to release an album on vinyl as the format is making a huge comeback, with sales at their highest point in 30 years. This surge of interest, coupled with the fact that every single artist on Earth has made a lockdown album that they want to release on vinyl, has caused a bit of an overwhelm so pressing plants are taking longer than usual. But it will be worth the wait!

Words and pictures are by Jon Southcoasting.

You can pre-order ‘Sunrooms’ at the Greenness crowdfunder page here.

If you want to watch the live show at St George’s with Oddfellows Casino on 13th October tickets are still available from the Melting Vinyl website here.