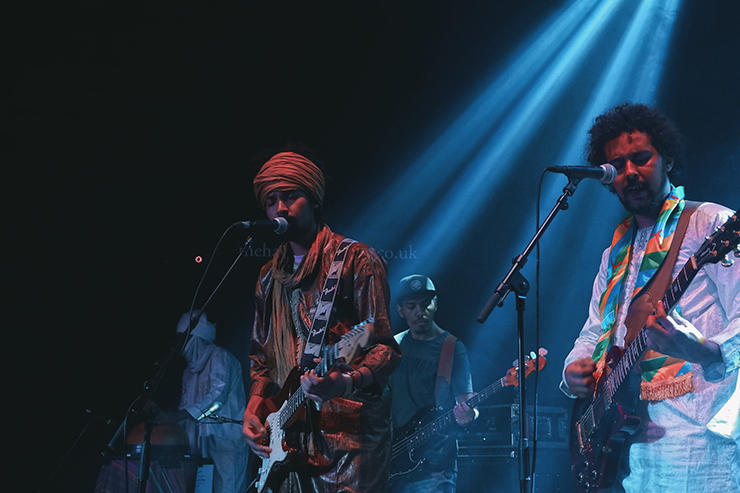 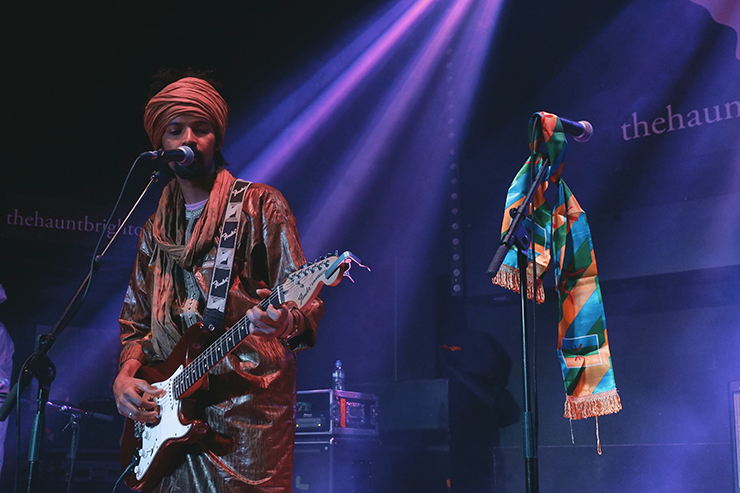 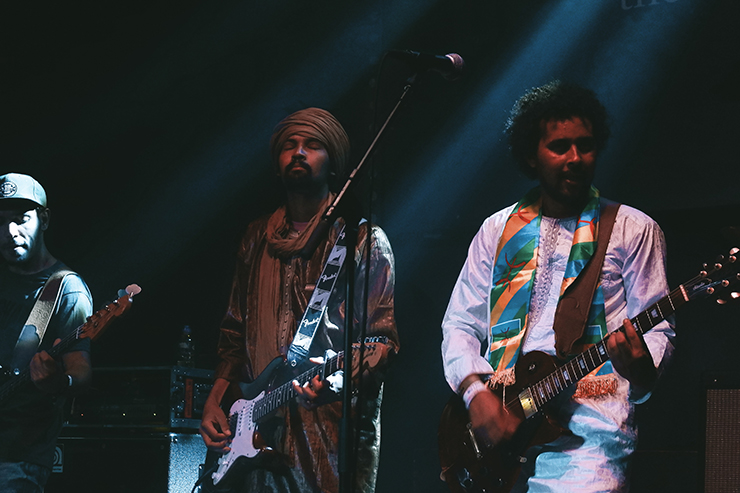 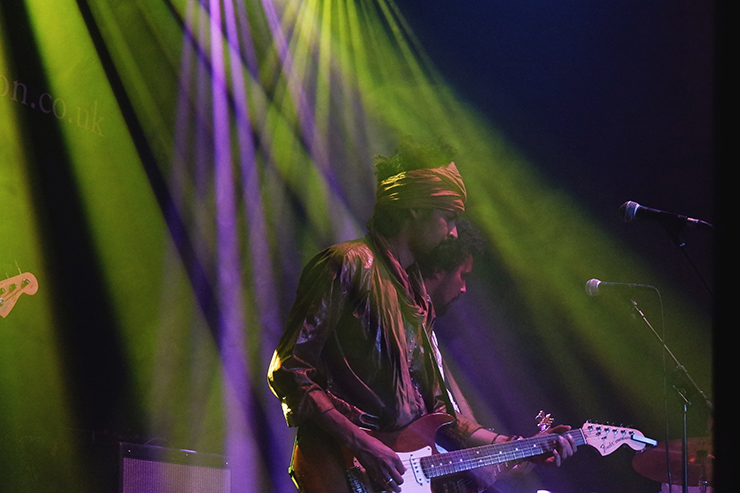 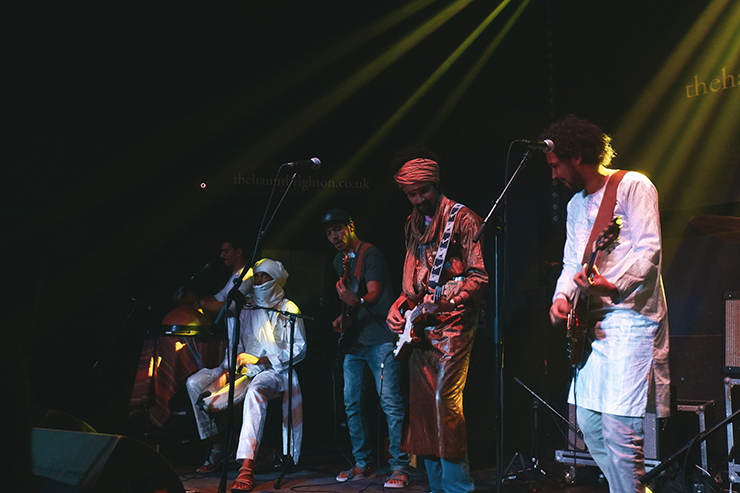 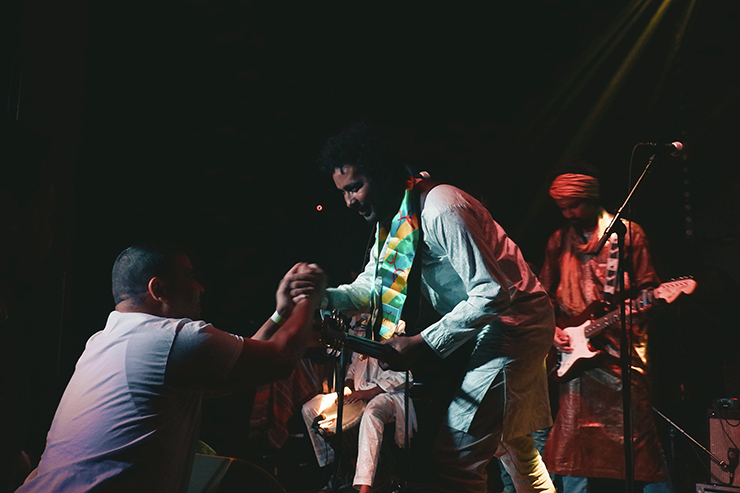 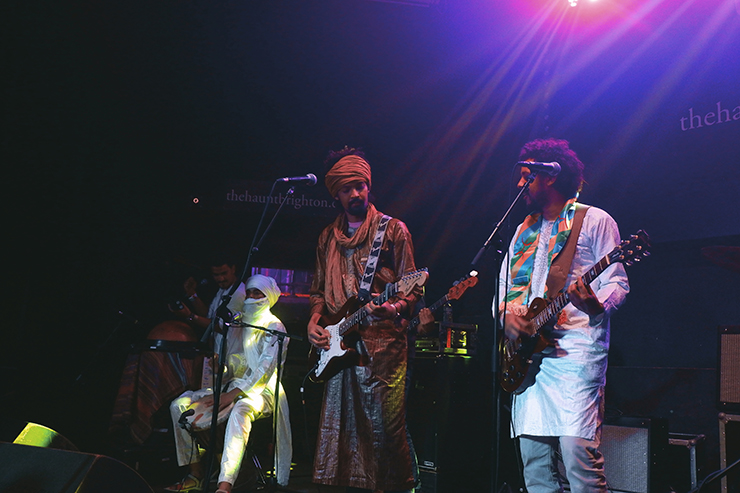 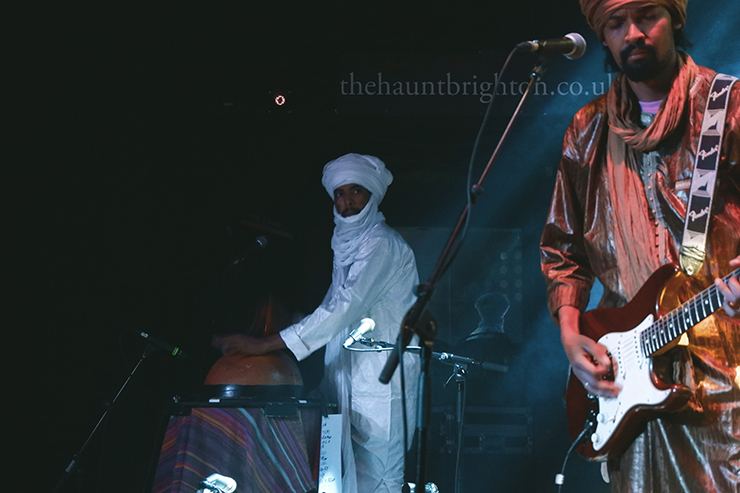 It is often the case that many of life’s most beautiful moments come from the saddest of situations. In the case of Tuareg rockers Imarhan, with much of their musical catalogue written about the desperate plight of their people, you could sense a meaning to these songs without needing to understand the language.

Imarhan, which means “The one’s I care about”, were formed over ten years ago in Algeria. Throughout the gig they gave little away in their gestures other than the occasional smile, yet the real emotion lay in the music. From the moment the quintet took to the stage we were immediately captivated by their beautifully radiant and highly individual style. Before a note was even played the crowd were seemingly won over already.

The band transitioned between funky up-tempo danceable beats and mellower tunes, yet it was the upbeat material that proved to be the most engrossing of the two styles and this allowed the band to showcase the mastery of their respective instruments. Impressively, one of the band’s two percussionists juggled duties between two instruments, frequently darting from one to another between songs. Meanwhile, lead singer and guitarist Sadam pulled off some funky bluesy riffs, making it seem entirely effortless.

During many of the funkier up-tempo tunes, the band encouraged the audience to clap along, but we really didn’t need much convincing, indeed many were unable to resist the urge to dance wildly. One audience member had brought along some Berber flags and handed one to guitarist Abdelkader who, in good spirits, proceeded to wear it around his neck for the rest of the gig.

Anyone who hadn’t seen Imarhan before would certainly have been in for a revelation. As good as they are in the studio, it’s live performances where the band truly excel and this particular gig was certainly no exception. Their blend of traditional Berber music and western rock is masterful and yet they always seemed so modest and perhaps even a little shy. Imarhan certainly aren’t a band that will ever boast about how great they are, however you simply need to listen to their music to appreciate that fact for yourself.

Imarhan have a spectacular ability to blend of the various sounds of their respective instruments in such a way that it seems as if the music is woven together. The instruments seemingly compete with one another for dominance and with the deep soulful beating of the percussion, it really comes to life. The fact that one of the strongest songs of the evening, ‘Tahabort’, was actually played twice, proved to not be a negative decision at all. It was the biggest crowd-pleaser and a perfect climax to a thoroughly enjoyable evening.

Sometimes an article is a bit of a team effort, and those are tagged SOURCE Writers. If you’d like to be part of that team, hit the Contact link at the top and get your work on this website.
← PREVIOUS POST
Street Source No.27
NEXT POST →
Steve Davis and Kavus Torabi, Fri 5th Oct
Mailing List
Recent Posts
Website developed in Brighton by Infobo
Copyright © Brighton Source 2009-2021
Imarhan Review - Brighton Source