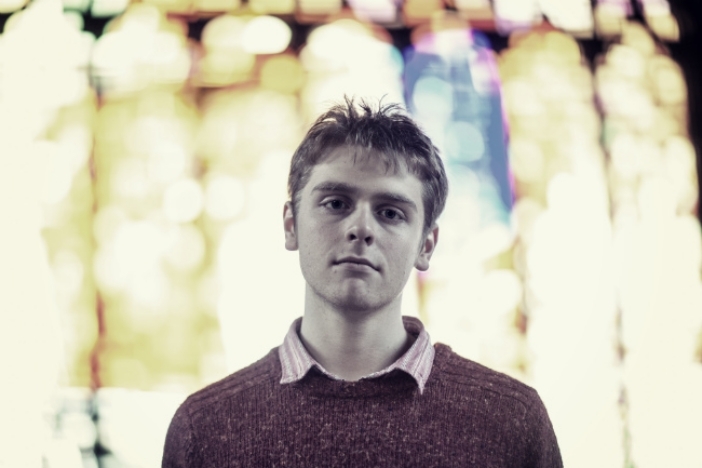 We’re still coming to terms with yesterday’s David Bowie news when the offer comes to get out of our sunken mood for the evening, socialise and witness some living, breathing new music. Saddleworth innovator Kiran Leonard shares several traits with Bowie: a precocious, early-blooming talent (20 years old as he prepares his second album for release, he started recording when only 12), multi-instrumental skills (22 of them on debut ‘Bowler Hat Soup’) and an occasional temptation to avoid taking his songs from A to B when there’s the chance to detour via Z, K and Q first. Even better, he’s quickly found a unique voice, his restless, wide-ranging songwriting unlike any of his contemporaries.

Leonard’s set crackles into life with the full 16 minutes of new single ‘Pink Fruit’, an erratic epic of clashing Mars Volta structures, oblique lyrics and spiralling violin interludes. While his band chop and change instruments and tempos, Leonard stabs and scrapes flinty chords from his guitar, side-on to the crowd, dipping and bowing in concentration. While superficially challenging, the commitment and intensity of the musicians draws us in, and by the song’s eventual end the room is breathless and won over.

Leonard introduces the rapid, zig-zagging alien abduction tale ‘Oakland Highball’ by freely acknowledging a debt to Radiohead’s ‘Subterranean Homesick Alien’ and they’re an illuminating reference point for his music (he also carries traces of those great English eccentrics Cardiacs). The group shift up gears through ‘Exeter Services’ (“It’s not about Exeter Services”, Leonard points out, should any Devonians be present) and ‘Port-Ainé’ before slamming to a halt with the urgent ‘Geraldo’s Farm’.

Remaining on stage for a solo encore, previous single ‘Dear Lincoln’ proves Leonard can be succinct and immediate when he wishes. Finally, almost as an afterthought, he softly mutters an introduction to ‘Working People’, suggesting we Google its subject (the widely reported death of former soldier, and apparent victim of Work And Pensions Secretary Iain Duncan Smith’s detested benefits sanctions, David Clapson). We came feeling sad for yesterday, expecting escapist prog fancies and not certain we’d stay, but ended up with iron strong political awareness, faith in tomorrow’s artists restored.