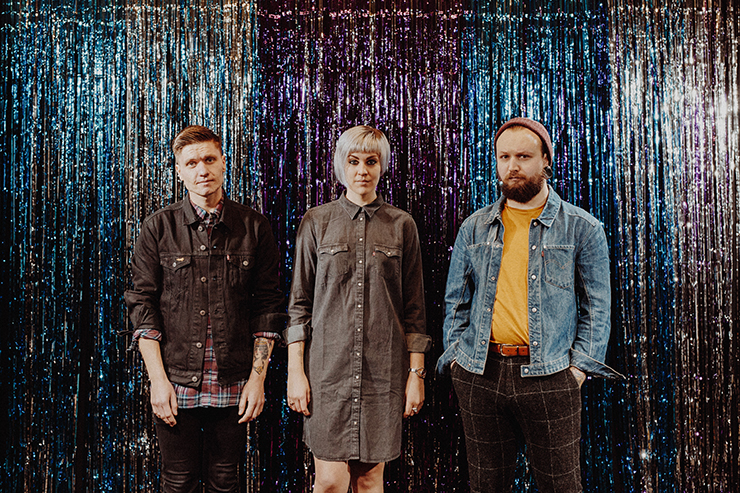 It’s always a busy time of year for local releases, but recently we’ve been swamped. Where to start? We had to pick out our favourites so this month’s round-up of new Brighton music includes albums by Rokurokubi and Oli Spleen, a debut EP from Lazybones (pictured above) and singles by Dom Champ, Hatter and Night House. Plus a compilation featuring 18 other cool Brighton bands.

“Welcome me in, welcome me in,” sings Rose Dutton on the opening verse of Rokurokubi’s debut album. It’s an apt introduction to a record that envelops the listener in a rich world of psychedelic folk rock. Continuing the tradition of English folk and psyche that began in the 1960s, these songs seem both oddly comforting and occasionally spooky. At Lewes Psychedelic Festival last week the band’s sound was described by our reviewer as “a dichotomy, half chaos and half peace”. On record, however, the band errs towards the peaceful side, with the duo’s guitar and drums fleshed out with sitar, cello, flute and heaps of percussion. (BB)

The lush orchestration and introspective mood of Oli Spleen’s new album is a world away from the abrasive electro of his debut solo record, not to mention the punk shock tactics of his erstwhile band The Flesh Happening. Yet there’s an intensity here of a different kind. Driven to a deeper ambition by traumatic events in his personal life, Oli has teamed up with members of local indie-noir band BirdEatsBaby to craft a collection of gloomy ballads and wayward chansons. These are hard-earned tales of heartbreak and turmoil, lifted to redemption by classy keys and strings. (BB)

Who is Céline? We don’t know, but going by the songs she’s selected as the curator of this Brighton indie compilation she seems to have pretty good taste. We certainly know more about some of the bands involved; Prince Vaseline, Octopuses and Porridge Radio are all SOURCE favourites. You may well have heard some of these songs before, but there’s plenty to explore given there’s a total of 18 tracks on the ‘tape’ (it’s actually only available on Bandcamp). Listen out for Fierce Friend, Boy In The Cupboard, Animal House and The Sticks. (BB)

Lazybones
‘Bang! Bang!’ (Killing Moon)
Each of the four tracks on Lazybones’ debut EP delivers a visceral hit of sleazy pop rock, the kind that enters the veins within seconds. Nevertheless, the bratty vocal style and bombastic production come into their own on recent single ‘Heart Beat Like A Drum’. It’s not miles away from some of Yeah Yeah Yeahs’ stuff, just with the angst slider nudged down a little. The band are playing at the Hope & Ruin on Weds 20th Feb as part of a short UK tour. If they sound this punchy on record, they must be a blast live. (BB)

Dom Champ
‘What You Want, What You Need’

The latest single from Eastbourne poet/rapper Dominic Champion begins with the sound of crashing waves and creates an instant summer warmth with mellow flute and dreamy funk beats. The “I know what you want, I know what you need” chorus is unavoidably catchy and the drifting melody conjures up memories of The Avalanches’ ‘Since I Left You’. There are no Americanisms here; it’s original Sussex material, recorded in Brighton, and if the song picks up momentum you could be hearing it on the seafront sound systems for the rest of the year. (SC)

Hatter
‘Upside Down’
Emerging as one of Brighton’s hip hop talents to look out for, Hatter adds to the strong list of artists coming through AudioActive’s youth projects, something he’s been involved with for 10 years. New single ‘Upside Down’ (available now on Spotify) deploys a dark, brooding bassline with strings to pull you in. Blending grime and trap with an 80s synth feel, the track has a hook we can’t get out of our head. Getting out your head continues as a theme in Hatter’s stories of hedonism and heavy weekends, with Eyez’s verse coming in to weave more late night tales. (MT)

Night House
‘Unfold’ (Back In The Woods Records)

Nick Williams has been playing and putting on gigs around Brighton for a good few years, but anyone familiar with his acoustic folky songwriting might be surprised by the direction he’s taken here. This is the latest offering from his forthcoming debut album as Night House, and it’s a touching ode to lost relationships with electronic blips and beats underpinning the swelling synths and strings. The vocals exhibit the keening, emotive quality of Villager’s Conor O’Brien, though the general mood also recalls James Blake or Bon Iver. The single is launched on March 1st with a show at St Nicholas’ Church. (BB)

Sometimes an article is a bit of a team effort, and those are tagged SOURCE Writers. If you’d like to be part of that team, hit the Contact link at the top and get your work on this website.
← PREVIOUS POST
Nick Cave comes to Brighton on a bizarre speaking tour
NEXT POST →
Lewes Psychedelic Festival 2019 Review
Mailing List
Recent Posts
Website developed in Brighton by Infobo
Copyright © Brighton Source 2009-2021
Locally Sourced, Feb 2019 - Brighton Source