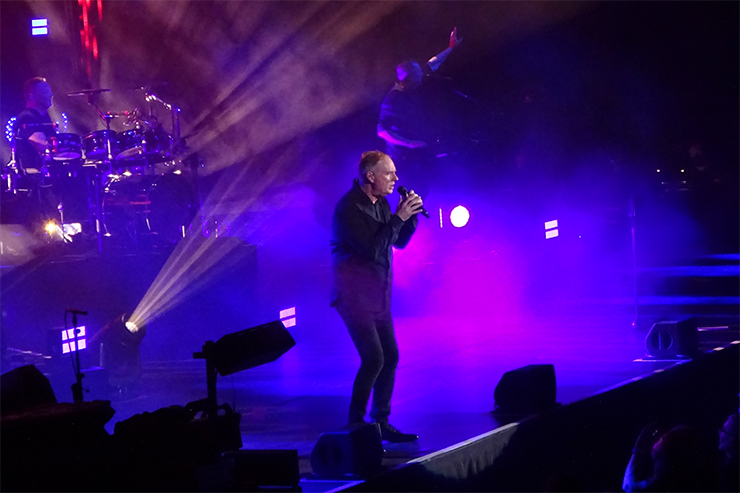 Stepping out in front of a moonlit shore, a foamy tide lapping hungrily against the strand, OMD are once again rebirthed on stage. Before a massive triptych visual display, the audience are immersed in a sea of anticipation as Andy McCluskey opens the night with a mesmeric rendition of ‘Sealand’. The singer commences a countdown commemorating 40 years of their quintessential album ‘Architecture & Morality’, and goes on to greet an enthusiastic crowd that is eagerly awaiting his next move.

The band tear through the album’s greatest tracks, ‘Souvenir’, ‘Joan Of Arc’ and ‘Maid Of Orleans’, with McCluskey and founding member Paul Humphreys remaining effortlessly poised, dressed head-to-toe in black. The stage now awash with gold, flooded with dreamy pinks and violent blues, we’re transported inside a utopian fantasy, kicking off with ‘The New Stone Age’. The audience erupts into dancing, and we’re left breathless and impatient as he teases out the opening of ‘Tesla Girls’ off the album ‘Junk Culture’. Quickly moving through the decades, we make our way to ‘History Of Modern’ with a brisk stopover for OMD’s later years.

Having originally formed in 1978, OMD were hailed as iconic innovators of synth-pop and received wall-to-wall acclaim for their anti-war anthem ‘Enola Gay’ in 1980 and for tracks such as ‘Electricity’ and ‘Messages’ from the band’s namesake album the same year. Reuniting in 2006 after a fairly lengthy split, the band have put out three new albums this century, with 2017’s ‘The Punishment Of Luxury’ being their most recent release.

The band’s performance tonight generates a genuine sense of community and hopefulness for the future. There’s a gracious to-and-froing between McCluskey and Humphreys as they let the other take the lead, and both applaud additional members Martin Cooper and Stuart Kershaw throughout the night. McCluskey addresses the audience with open arms and we witness cherished moments between friends reunited, with everyone taking a moment to reflect on the difficulties of the past year and a half.

Patiently pondering the arrival of a closing track, we are met with a surprise. OMD have traditionally ended many a tour with the track ‘Electricity’ (now in its 45th year), but tonight the duo opt for a different farewell, closing instead with ‘The Romance Of The Telescope’. It’s a sleepier, reflective wind-down from a high-powered night. We end with McCluskey throwing a bra back into the audience. He beams and shouts “Christmas came early”.