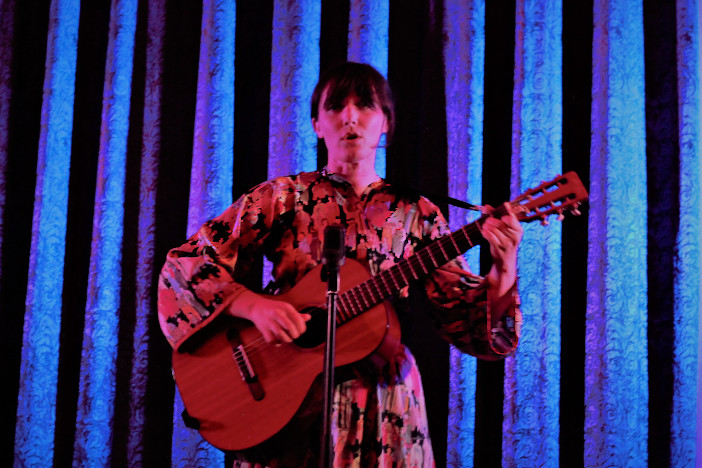 Sarah Blasko sneaked on stage almost anonymously, almost embarrassed to be here. She stood in front of the audience, a cappella, a naked voice wrapped around a song. Then she moved over to the Unitarian Church’s piano and started to play ‘I Awake’ from her 2012 album of the same name.

“I’m awake, no I’m not scared / Shoot an apple off my head…
Embrace the doubt and face the fear… I’m going out.”

Third song was the marvellous ‘I Wanna Be Your Man’ from 2016’s ‘Eternal Return’ (“easy come, easy go, you’re living in a man’s world… It’s no place to be”) and it was clear this was going to be a special evening.

A few days earlier Sarah Blasko had sold out the 700-seater Islington Town Hall in London. Back home in Australia she’s played Sydney Opera House with an orchestra. So what brought her to the tiny Unitarian Church in Brighton we do not know. The gig was sold out of course, but the room was hardly full, and certainly there were fewer seats than many other gigs we had seen there. We felt privileged, almost in awe and there was a strange surprising silence between songs.

She made jokes, mocking members of the audience who treated this concert like any other, walking out to the toilet or the bar in-between songs. “I’m just trying to dramatize everything,” she said, “I’m just trying to break the ice by being a fool,” as if recounting one of her own tender-wise lyrics. Her best joke was made inadvertently, saved for the last when she sent us home. “We can go to bed now,” she said, before smiling and then correcting herself, telling the audience she meant they could stay and chat or go home and get some sleep. It was that kind of intimate occasion.

Blasko’s songs have that kind of fumbling warmth and intelligent humanity, producing award-winning albums for her soulful, pop-rock repertoire. A lot of the songs she played tonight were from her latest album ‘Depth Of Field’ which is as good as any of the seven that have come before, which is to say it is very good indeed. ‘Phantom’ the album opener is a haunting funky number, played tonight with the aid of a backing tape but no less moving for that. ‘A Shot’, played with just the piano, was absolutely stunning, Blasko’s voice curling around the words like a snake as she sings:

‘A Shot’ is just one of the highlights from Blasko’s latest album. She followed that with ‘Never Let Me Go’ which she called a “tongue-in-cheek song about turning into a monster in a relationship” and ‘Heaven Sent’, a song she said was “about religion” that ends with a question: are we all a dream? There were songs from earlier albums, like ‘We Won’t Run’ from 2009’s ‘As Day Follows Night’ or the stunning Cohen-esque ‘Woman By The well’ from her 2006 album ‘What The Sea Wants, The Sea Will Have’ and played standing with just an acoustic guitar.

This was a performance to be treasured, and a rare opportunity here in the UK to see an artist of Blasko’s class in a small venue, raw and unaffected.

Support came from Brighton-resident and harpist Emma Gatrill, accompanied by Marcus Hamblett, fresh back from a tour of Japan to promote her album ‘Cocoon’ which is also well worth checking out.