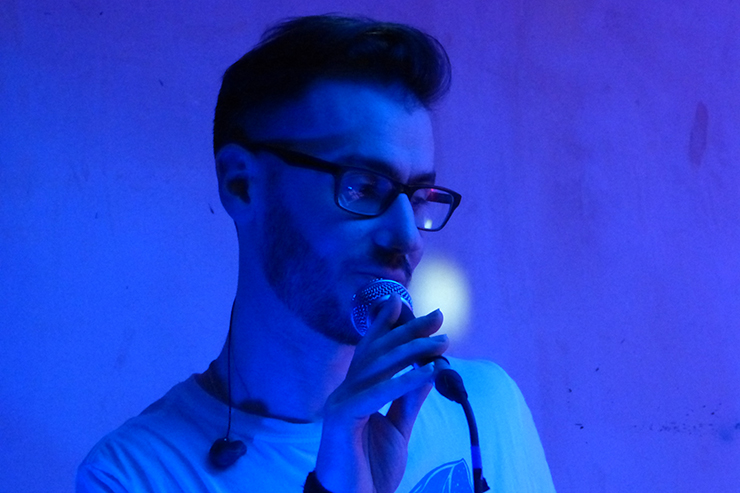 Over the last few years, the Rose Hill has slowly become one of the most interesting venues in town for its avant-garde and creative programme of contemporary artists willing to bring something new and fresh to the table, and tonight was no exception.

Upon entering the small room, a soft, soulful voice announces: “This next one is a sad song, I’m afraid”. Swedish singer-songwriter Tilda Allie is standing on stage on her own, with a laptop, a keyboard and her trademark fairy lights microphone stand. She delivers a couple of stripped-back songs, her extraordinary voice simply accompanied by slow, delicate chords. All the lyrics of her original songs revolve around the themes of finding strength in vulnerability and not letting other people define who you are.

Tilda’s emotional performance takes a sassier turn with the closing song ‘Boi’, where she playfully recalls an immature ex-lover and uses a more upbeat backing track to support her powerful vocals. This rendition gives us a glimpse of the super energetic show she performs when playing with a full band, which is an absolute must-see. But Tilda Allie’s solo set is nothing short of impressive, as it creates a beautiful sense of intimacy whilst really bringing out the raw quality of her voice. The performance left everyone completely stunned, and ready for another emotional journey with headliner SK Shlomo.

As the lights go down, a video is projected on stage. Simon Kahn, aka Shlomo, reminisces about his incredible career as a world looping and beatboxing champion. He has had the opportunity to collaborate with many established artists, including Icelandic diva Björk, who inspired him to do his own thing and write an album. At first, all seemed well: full of inspiration, SK Shlomo started writing a new song every day, feeling entirely confident in his project. But soon, doubt and fear crept in, and a long period of depression ensued, during which the musician felt incapable of carrying on with his songwriting venture and even contemplated suicide. Fortunately, after seeking help and opening up about his mental health struggles, SK Shlomo embarked on a journey towards recovery, culminating with the completion of his album and a general sense of fulfilment in his personal life as well, notably as a father.

Following this incredibly honest and touching introduction, the multifaceted artist jumped on stage and treated the audience to a varied, elaborate set merging together elements of beatboxing, singing, live looping, electronic music, production and storytelling. The first single from the album, ‘Invisible’, offers a distinctive melodic flavour with Arabic influences, stemming from SK Shlomo’s roots. To illustrate his origins, he recalls his childhood and the family gatherings where his grandmother would sing while his grandfather fiddled with worry beads, imitating and looping each noise as the story unfolds. While layers of sound bring settings and characters to life, we are progressively immersed in a joyful Jewish party, dancing and clapping along.

SK Shlomo cleverly intertwines the album’s songs with electronic improvisation, beatboxing and audience participation, regularly turning the mic towards the public and recording people’s cheers, before looping and processing them to create new layers and textures. The result is a playful, immersive experience, full of emotion and fragility as well, especially on the songs ‘Heartbeat’ and ‘The Future’, dedicated to his children. The set ends with ‘The First Time’, another single which features a poignant cinematic music video about forbidden love in the context of LGBTQI+ relationships, and is also the artist’s “first ever music video”. SK Shlomo’s performance lives up to the studio version and beautifully shows his higher register, literally closing the set on a high note.

The album ‘Surrender’ is out on 29th March 2019 and was crowdfunded via PledgeMusic, with a percentage of donations going to mental health charity Young Minds. Catch SK Shlomo on tour here.

Tilda Allie will next be performing in Brighton as part of two International Women’s day celebrations on 8th March – 5.30pm at The Latest Music Bar and 11pm at Dead Wax Social.