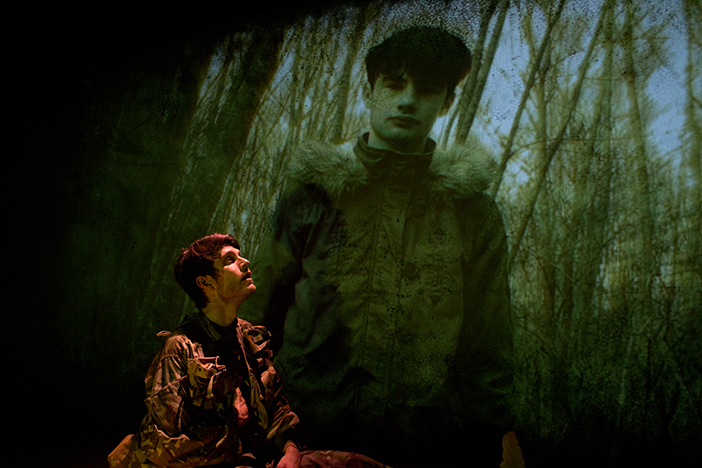 The Devil Speaks True is an intriguing mix of live performance, spoken word and real life confessions. The story of Macbeth is told from Banquo’s perspective and is interspersed with the testimony of war veterans who have suffered Post Traumatic Stress Disorder. While this dialogue is delivered through supplied headphones, an actor performs live in front of the audience – to hammer home the message of soldiers, PTSD and the madness of the play. Oh yeah, and large portions of the hour long play are in total darkness.

While parts of this might sound like your worst nightmare, sitting in the dark and hearing real-life stories of kidnapping and torture, it does make sense as Banquo and Macbeth are both soldiers who survived battles of their own. When we first meet them in the play they are heading home, and as the story progresses madness and mental suffering is on the cards for both characters.

The interesting thing, and also one of the problems of the play, is the method of storytelling. At first you find yourself sitting in the dark. Broody and ambient post-rock music fills your ears and then you’re introduced to TS, a 45 year old veteran who was stationed in Afghanistan and has had PTSD since 2008. Then we hear from Lance Corporal JG, a 25-year-old veteran whose job it was to find hidden explosives in Afghanistan, and finally from PM – an IT consultant who was kidnapped in Iraq in May 2007 and only released in late 2009. After this brief introduction, Macbeth is relayed into the headphones while an actor appears and acts in front of us. Then it all goes black again. This is sequence is repeated, but never in the same order as before.

At times the three strands of storytelling get confused. Unless you know Macbeth well you don’t really know who’s saying what as no one is introduced during the play. On paper, the gimmick of the headphones and the sitting in darkness might seem like the weak link, but this actually turns out to be the strongest part of the performance. It’s the live section that throws a spanner in the works. It’s never really explained if the actor is playing the part of Macbeth, Banquo or one of the real-life soldiers.

Nevertheless, the insights given by the veterans are unflinching and there’s certainly no punches pulled. Everything is out in the open and, because of this starkness, the play is also life-affirming and oddly humorous at times. Ultimately The Devil Speaks True is a captivating way of retelling a classic story, by grounding it in the reality of war veterans. And thanks to this connection it’s one of the most transfixing and remarkable things we’ve seen in Brighton for a long time.

Sometimes an article is a bit of a team effort, and those are tagged SOURCE Writers. If you’d like to be part of that team, hit the Contact link at the top and get your work on this website.
← PREVIOUS POST
Purson Review
NEXT POST →
Street Source No.1
Mailing List
Recent Posts
Website developed in Brighton by Infobo
Copyright © Brighton Source 2009-2021
The Devil Speaks True Review - Brighton Source