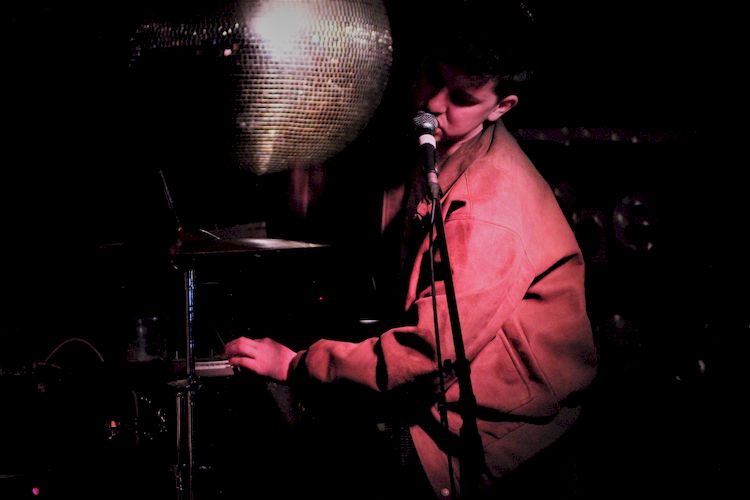 French band the Limiñanas have been making rip-roaring garage-rock for over a decade now but they are definitely still well below the radar. So it was a rare but welcome sight to see Lionel and Marie over from their home in the south of France to play the final gig of a short UK tour in Brighton.

The Limiñanas sound is nothing radical, but they are very good at what they do and in Brighton they put on a good show. Perhaps similar to bands like Moon Duo or Blood Red Shoes, their influences range from the obvious Nuggets-style primitive psych-rock, through the Velvets and the Stooges, and hints at classic French ye-ye sixties pop.

The backbone of the band is Lio’s riff-tastic guitar playing and Marie’s steady, energetic drumming but the live band comprised seven players in total, including male and female vocalists who added more guitar and tambourine respectively. They don’t talk much, peppering their sonic assault with the occasional “merci” but nothing more, so what we get is a blast of twenty or so garage-rock tunes. But what a blast it is. The band ooze cool of course. In fact, ‘cool’ is a word that’s hard to avoid in almost any write-up of the band. The new album features a guest vocal from French actress Emmanuelle Seigner, and Uncut famously wrote that they sounded like they “stepped out of one of Quentin Tarantino’s dreams”.

Their new album ‘Shadow People’ was recorded in Berlin (of course) and it’s no great step forward from the preceding four, which of course means it’s a very enjoyable listen. About half the new tracks got an airing tonight with the title track being a particular highlight, and the band’s setlist has notes against some of the songs that make plain their simple attack – ‘Garden Of Love’ is RE LA DO SOL. ‘Stella Star’ is listed as just RE, and ‘Funeral Baby’ as “La corde de RE a vide DO#” which gives you a decent idea of their approach. If that makes them sound simple, then the seven-player strong stage show gave their sound a variety and range which other bands of a similar ilk often lack. They ended their set with a riotous romp through Van Morrison’s ‘Gloria’ which sent the audience home more than happy.

Support tonight came from Portsmouth’s Melt Dunes who combined a krautrock, shoegazing sound reminiscent of a band like Loop, with the dynamic psyche-rock of early Hawkwind to very good effect.