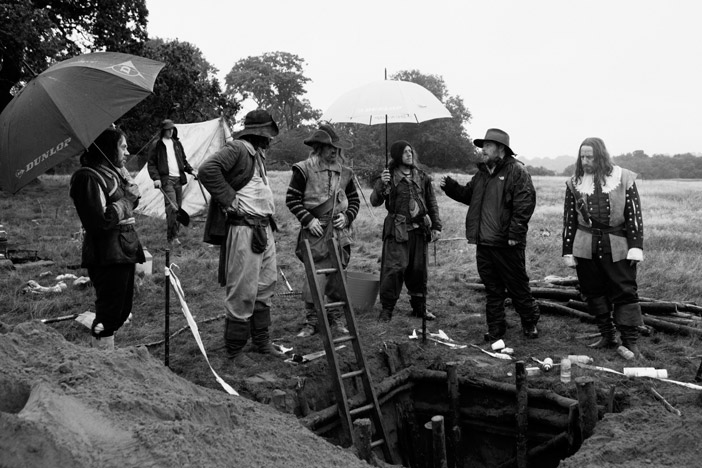 Ben Wheatley is the acclaimed director of Down Terrace (shot in Brighton, where he lives with partner and scriptwriter Amy Jump), Kill List and Sightseers. His new film A Field In England stars regular collaborator Michael Smiley (Spaced), Julian Barratt (The Mighty Boosh) and Reece Shearsmith (The League Of Gentlemen) in a 17th century tale of mushrooms and madness.

Your film opens at cinemas on Fri 5th, with its TV broadcast (on Film4), DVD, VOD and download appearance happening on the same day. Why do this all at once?
There’s a certain amount of screens in the UK so if you’re a big release maybe you can do 400, 500 screens. Everyone in Britain can get to see your film. But if you’re a film like A Field In England and you’ve got on in 10 screens, it doesn’t matter how good your press is because if people can’t get to a cinema near them within 10 or 20 minutes then they’re not going to go. They can’t see the film so your audience is totally limited at that point. By the time the DVD comes out, the initial press burst you get for a movie is lost, so then you have to do more, and at the end of that process it goes on telly. What you want for a small film is that word of mouth and that could be generated by the TV screening, so if you do it all at the start you’ve got more chance of all those different things feeding off each other.

Where did the idea of the film come from?
We’d been knocking it about for 10 years. Not this particular story, just a general idea that it’s going to be set in the English Civil War. What was attractive about that period is this idea of Britain totally changing and becoming radical and lots of different people’s positions changing dramatically. A lot of the things that we see now, even down to how the banks work, were set up in the Civil War. We’re still reaping the influence of it now, with the recession. Stuff that was set up at that point is built into the system. So I think the Civil War looms heavily over everything in the western world, cos then you get France and America and it’s the beginning of democracy pretty much. In terms of the UK it’s probably that and the Industrial Revolution that are the most important and influential things that have happened.

Which isn’t how schools teach British history.
No, it’s weird isn’t it? There’s something very uncool about Cromwell, it could be something as boring as the fact that he’s got a wart, but people just don’t want to talk about it. That’s why I really like folk music. In the 70s and 80s there was a real prejudice against it, “Oh it’s not very good,’ but actually it’s the basic building blocks of our culture. It’s ignored because people think new things are always better but if you’ve not got any context about where you come from you can’t really understand where you are.

There are always pagan, primitive or folk elements to your films.
Increasingly I think about what I would have been like 100 years ago, or 200 or a thousand. The person that I am probably wouldn’t have been much different really, and what’s interesting is how you would react to those times. If we’re the most successful point in our family, the sum total of all that DNA action over all that period, being born again and again and again, have we changed massively each time? I think that’s why I have this harking back to the past in my films because the present day isn’t as far in the future as we imagine. We’re just doing the same thing again and again and the names change and everyone swaps round the seats but it’s not actually any different to what it would’ve been hundreds of years ago.

FYI
WHERE: Duke’s At Komedia
WHEN: Fri 5th
WEB: afieldinengland.com