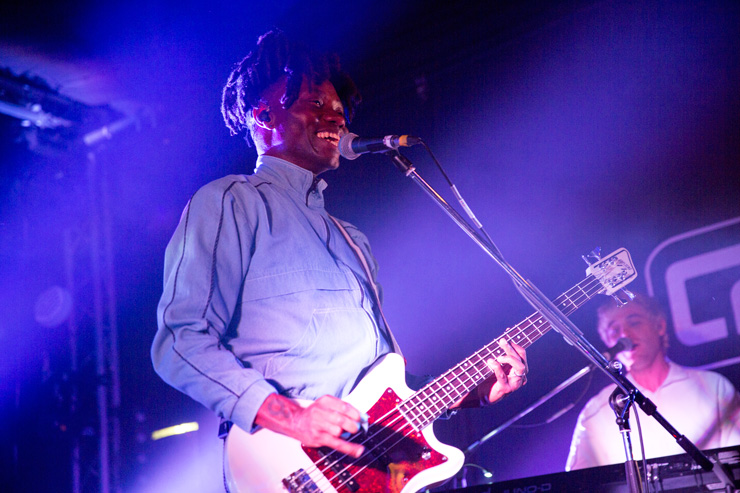 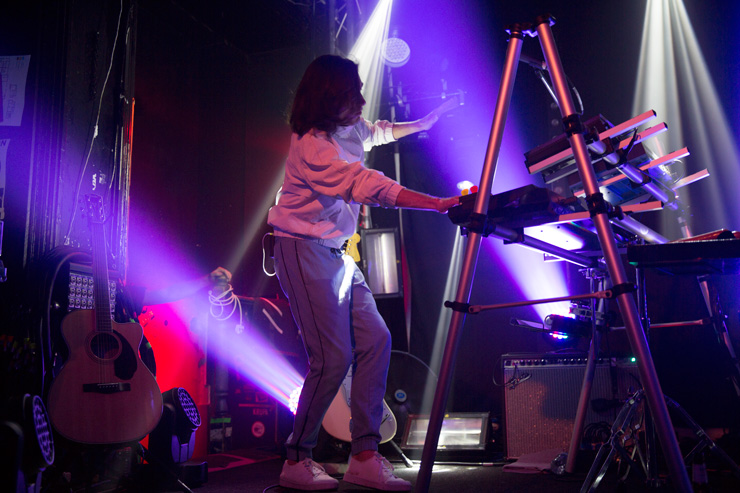 “It’s Saturday night in Brighton!” declares Joseph Mount with a self-effacing smile. It’s a Monday, but there’s certainly a celebratory weekend vibe going down, both onstage and in the audience. Tonight’s sold out show at Concorde 2 is a homecoming gig of sorts. Although Mount hails from Devon (as memorialised in their breakthrough album ‘The English Riviera’), Metronomy started their professional career in Brighton while Mount was a student, rising from the ashes of a previous outfit, The Customers. The band seem to enjoy being back where it all began, and their sense of fun is infectious.

Set opener ‘Boy Racers’, is a medium paced instrumental which acts as an extended band intro. “Hi I’m Oscar and I’m a Gemini.” One by one, the band members each give a sweet spoken word self introduction. Straight away, it’s clear that Mount wants us to see Metronomy as a working band of equals – which, considering he birthed the last two albums solo in the studio, feels like a statement of intent. There is a disconnect between Metronomy on disc and in live performance, and Mount seems keen to acknowledge this and celebrate the somewhat schizophrenic nature of this band.

Bassist Olugbenga Adelekan hitches a leg up on one of the monitor amps while he plucks the distinctive, ornate opening riff of ‘Heartbreaker’. The introductions are over and now the dancing can commence. It becomes evident that Metronomy in their live incarnation are unafraid to be a bit rock’n’roll.

After a couple of rapturously received tracks from ‘The English Riviera’, including a duet with drummer Anna Prior on ‘Everything Goes My Way’, Mount leads the band through a brace of tracks from the new album ‘Metronomy Forever’, released last weekend. They steer clear of the album’s more experimental and ambient cuts, going for songs which will keep the rapturous dance vibe going. Recent singles ‘Lately’ and ‘Salted Caramel Ice Cream’ are both met with enormous cheers from the audience, and already feel like instant Metronomy classics.

This new record is the sixth studio outing from a band that had inauspicious, lo-fi beginnings. A recently unearthed and re-shared interview for SOURCE from 2007 finds them being compared at that time to acts like Simian Mobile Disco and New Young Pony Club, a peergroup they have clearly long outlived and outclassed. Metronomy’s debut ‘Pip Paine’ may have been a largely instrumental, electro affair, but Joseph Mount quickly realized he had a taste for being a lead singer, and an aptitude for writing extremely catchy hooks. Long known as a remixer, recently he’s been in demand as a producer and songwriter, working on several tracks for Robyn’s recent, acclaimed ‘Honey’ album.

Tonight, however, Mount really does look like he’s relishing the experience of stepping out from the claustrophobic confines of the recording studio. He’s in the enviable position of enjoying the best of both worlds in this regard, with Metronomy the personal, at times whimsical, solo project, and Metronomy also the stomping, cavorting rock band. Set closer ‘Love Letters’ consolidates this – it’s a super heavy, rather glam version of the original song complete with extended, crowd-teasing mid-song pause.

Perhaps significantly for this Brighton show, the encore concludes with the instrumental ‘You Could Easily Have Me’ – a rare outing for a song from the band’s debut album, which functions wonderfully as a showstopping, headbanging guitar and keyboard thrash, whilst casting a nostalgic glance back to the band’s early beginnings in this city.

No-one could accuse Metronomy of outstaying their welcome tonight – the entire set lasts just over an hour and leaves us hoping in vain for a second encore. Yet we leave knowing we’ve been treated to the very best of a band now firing on all cylinders as they commence a world tour later in the autumn. Tickets are still available, at the time of writing, for their November dates at the London Roundhouse, so there’s still a chance to catch this impressive show.