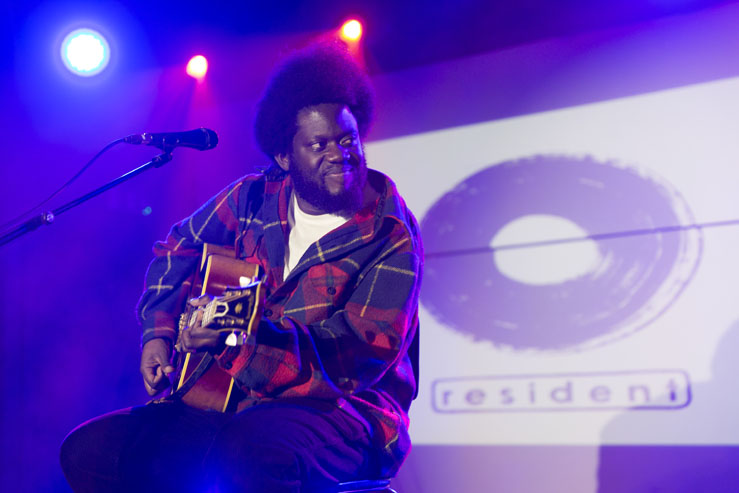 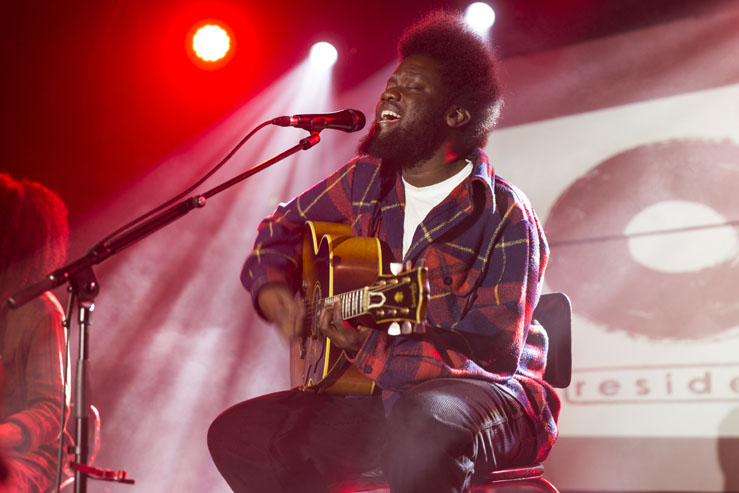 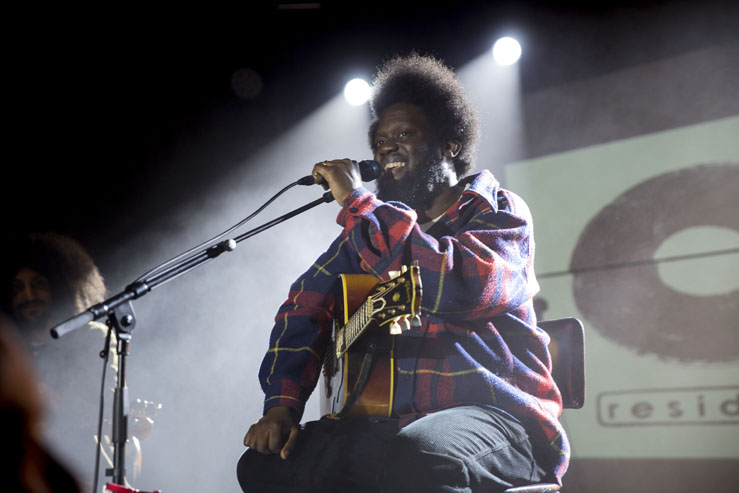 A member of the door staff at Chalk chats amiably with customers as they queue for Michael Kiwanuka’s acoustic show. “Soundcheck’s done,” he reassures us all, before pausing to add, reverentially, “He can really play guitar, that one. And trust me I’ve seen a few.”

Last time Kiwanuka played Brighton he sold out the Dome very quickly, and later this month he headlines Alexandra Palace. Tonight is, therefore, a rare opportunity to see him in a club venue. The gig is presented by Resident records, who sold the tickets to initial purchasers of the recently released ‘Kiwanuka’. An excited, disbelieving audience gathers to witness the live debut of a record The Guardian has already described as “one of the greatest albums of the decade”.

To a rapturous cheer, Kiwanuka shuffles somewhat bashfully onto the stage with his acoustic guitar. He is joined by a slimmed-down band of three extra people, who share their onstage duties – second acoustic guitar, electric bass, some percussion here and there plus, perhaps most importantly, two soulful female voices.

The band opens with ‘You Ain’t The Problem’, also the opening track from the new record. Any reservations we might have about how Kiwanuka’s ambitious new release (produced by Danger Mouse and replete with plangent orchestral soundscapes) might translate to a sparse acoustic rendition, are put to rest within moments of this opening song. Kiwanuka can indeed play a mean guitar, his voice is incredible, and his backing singers complement him perfectly, their voices adding the luxurious lush tones that give the record its beguiling, somewhat retro style.

These backing vocalists do a lot of the heavy lifting – a good example being ‘Tell Me A Tale’, the opening track of ‘Home Again’, Kiwanuka’s debut. For tonight’s rendition, they sing the horn part from the original recording, filling out the sound but also endowing it with more of a jazzy, almost Fela Kuti vibe.

There is a sadness, an ache, to much of Kiwanuka’s music. The new album feels, at first listen, like a protest record (the references to Marvin Gaye and Curtis Mayfield key it into an era of soul music as social comment), but it’s worth adding that Kiwanuka keeps it personal throughout, and on closer inspection the lyrics never stray far into the realm of the overtly political. Kiwanuka himself is an engaging if somewhat self-deprecating character, very much at home onstage chatting volubly between songs. His on-stage chat remains, like his music, endearingly personal in nature. He introduces ‘Light’, the closing track on the new album, with a particularly nostalgic anecdote about his teenage years, when he shared a bedroom with his brother and eagerly sought excuses to find some time alone to work on songwriting on his little acoustic guitar.

As the set progresses, we enjoy the variation in the dynamics of the songs here tonight. Like any good band, they know when to cut loose, and when to rein it in. ‘Hard To Say Goodbye’ dispenses with the band entirely and beautifully showcases just Kiwanuka and his guitar. By contrast ‘Rule The World’ (from 2016’s ‘Love & Hate’) comes to an unexpectedly heartfelt crescendo in which the female vocalists take the lead and swap improvised, melismatic exclamations in a kind of quasi-religious ecstasy. The audience are swept up and start to spontaneously cheer them mid-song, as Kiwanuka looks on, beaming. It’s an incredible moment.

“I’m lucky to have such a good band,” he says calmly, staring out at the slightly dazed audience, knowing this is something of an understatement. We’ve been pretty much floored.

As might be expected for an acoustic showcase, this is a short set – nine songs and no encore – but the audience seems delighted with what they have seen. As we file out of the venue, we overhear two young guys comparing notes on their reaction to ‘Cold Little Heart’ the closing song. “I thought I could hold it in, but then I saw the tears on your face and I lost it as well…” We know how they felt.

Peter did a degree in world art history and anthropology, before spending three years in the Japanese countryside teaching English at village schools. For the past eleven years he has worked as a freelance illustrator.
← PREVIOUS POST
Which Artists Open Houses to see this Christmas?
NEXT POST →
British Sea Power Photos
Mailing List
Recent Posts
Website developed in Brighton by Infobo
Copyright © Brighton Source 2009-2020
Michael Kiwanuka Review - Brighton Source