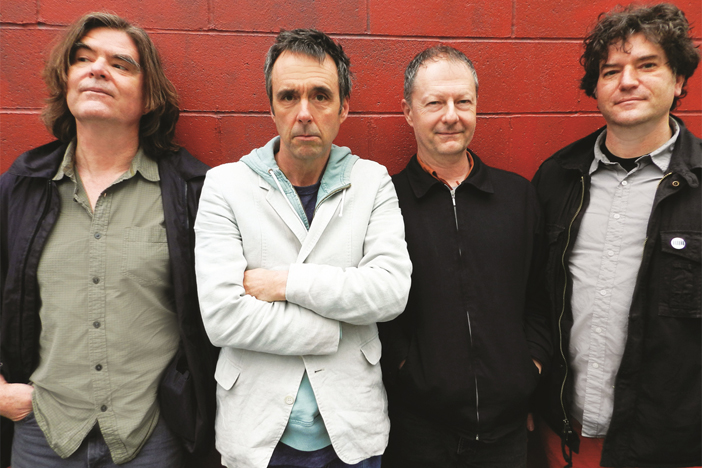 The first incarnation of Boston’s Mission Of Burma burnt brightly but briefly in the early 80s, scorching a fierce post punk guitar sound that pointed the way for thousands of indie rock acts to come.

Although they split in ’83, the band’s recordings have been reissued numerous times and become hugely influential in the US. The original Burma trio of Roger Miller, Clint Conley and Peter Prescott got back together a decade ago, with Shellac’s Bob Weston taking over the band’s inspired role of tape manipulation from retired innovator Martin Swope. They have a new album, their fourth post-reformation, to promote on this whistlestop, two-date British visit.

Still, however influential you are and however few and far between your UK shows, an early slot on a Monday evening is far from peak gigging time. It’s a half-full hardcore at the Haunt when Burma appear, piling into shrill opener ‘Secrets’, not that ever-grinning guitarist Miller seems to mind. It was his tinnitus that brought about Burma’s unfortunate split in the aftermath of debut album ‘Vs’, but with advances in hearing protection and careful stage planning (an acoustic barrier separates him from drummer Prescott) he clearly relishes the band’s new lease of life.

If it was the volume of Burma’s early shows that brought about Miller’s ear problems, this hasn’t stopped them from playing punishingly loudly. As he mixes the group’s sound offstage, Weston piles on tape noise, looping live and pre-recorded streams of audio chatter through the speakers. Initially there’s plenty of respite, as the band swap lead roles, joke with the crowd and shuffle the set-list, clanging tracks from their recent albums slipping seamlessly among a scattering of early songs.

The energy builds as the room fills though, and the slamming final run is a sonic endurance test. A double-sided punch through first single ‘Max Ernst’/’Academy Fight Song’ leads into a thunderous ‘Donna Sumeria’, Weston looping ear-splitting tape noise over and over until the band return for a rapid encore.

We leave with a final blast of ‘That’s How I Escaped My Certain Fate’ ringing in our heads, and step out into the evening light. Burma have hinted that this reunion won’t be indefinite, but when they’re on form like tonight they’re serving their past proud.