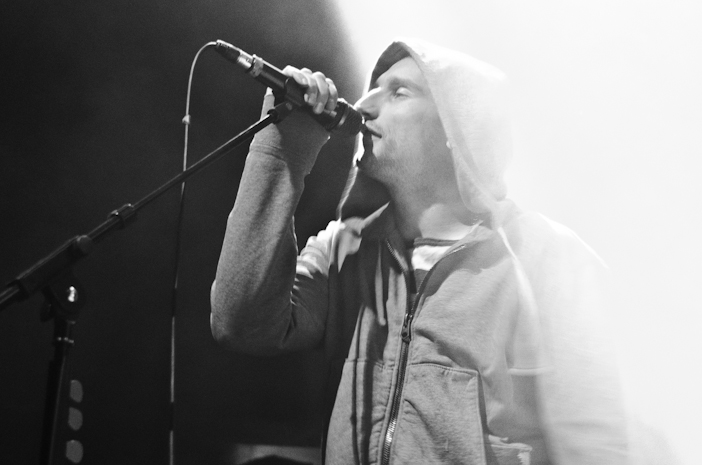 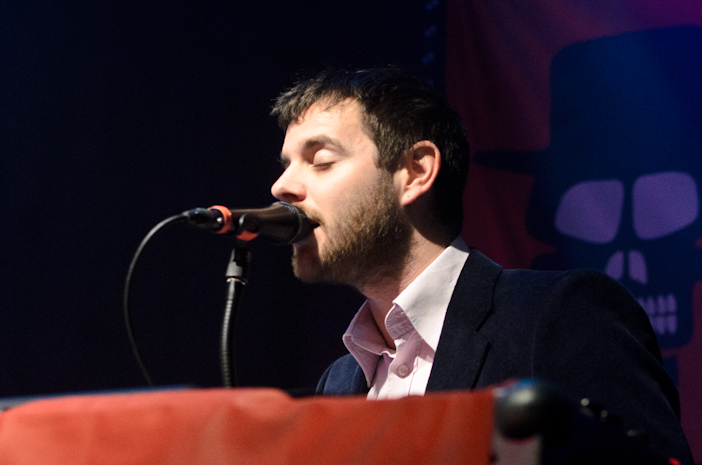 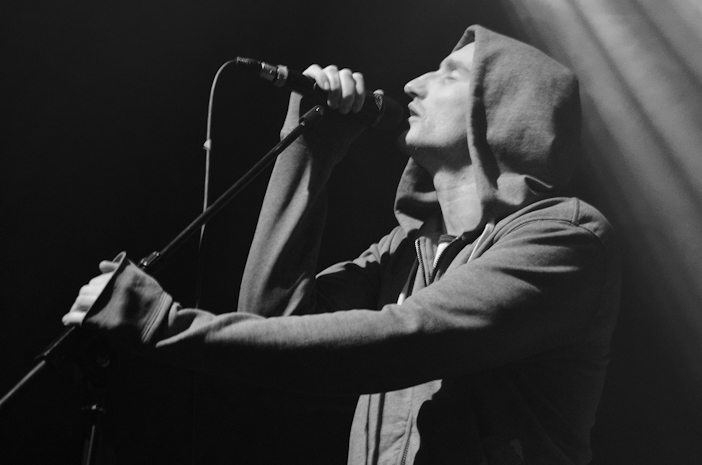 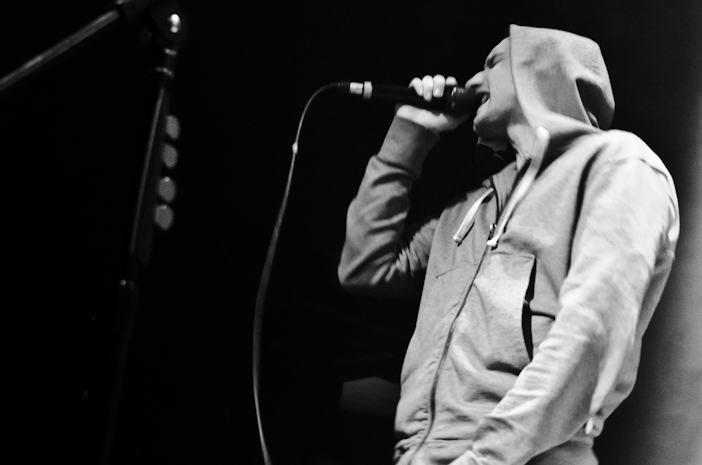 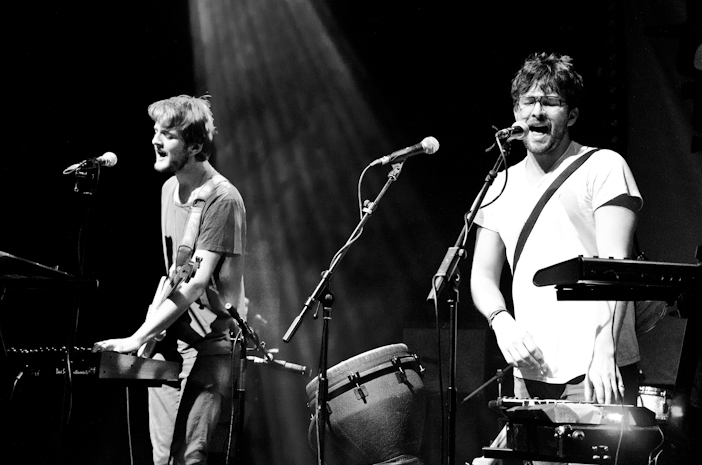 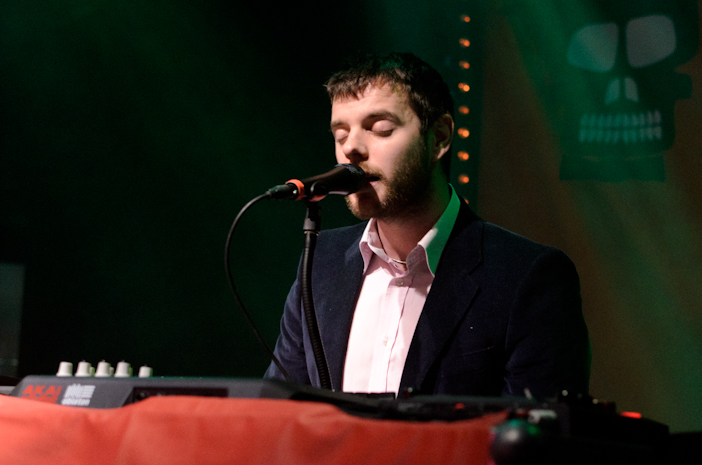 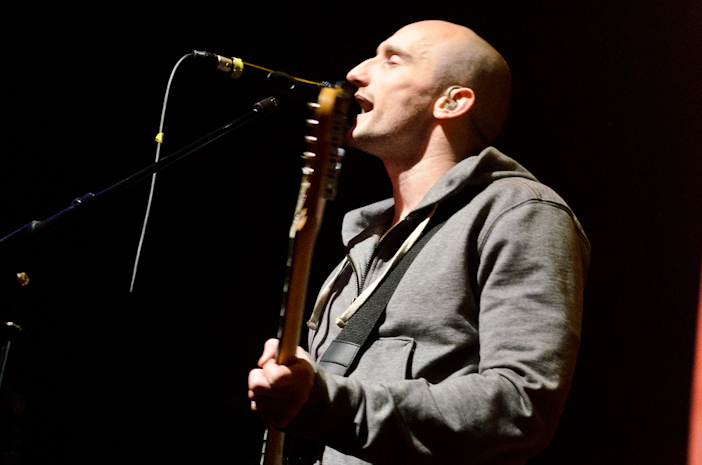 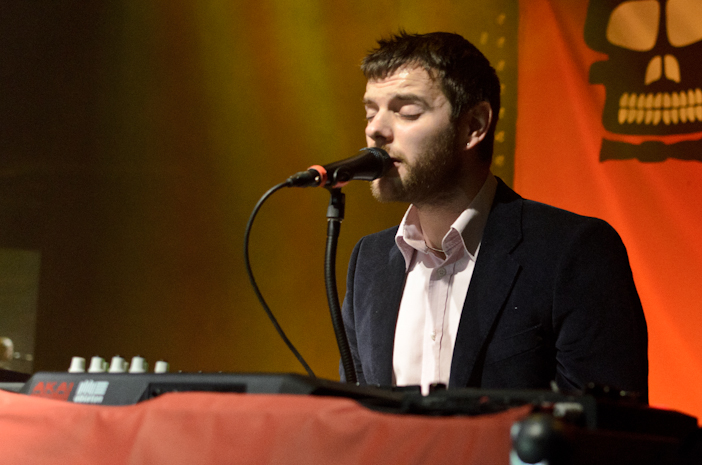 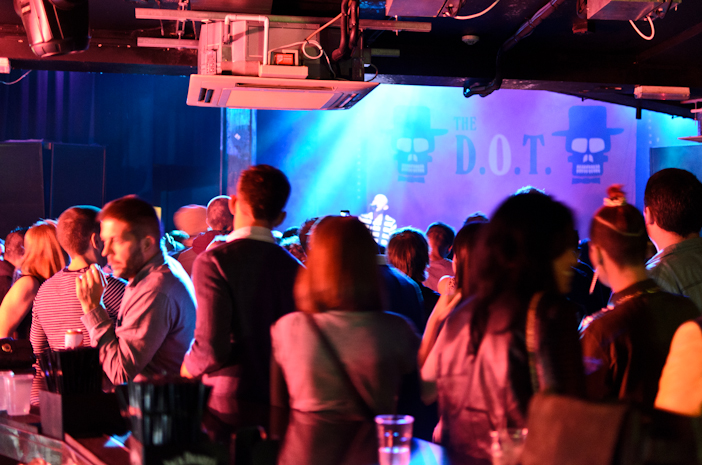 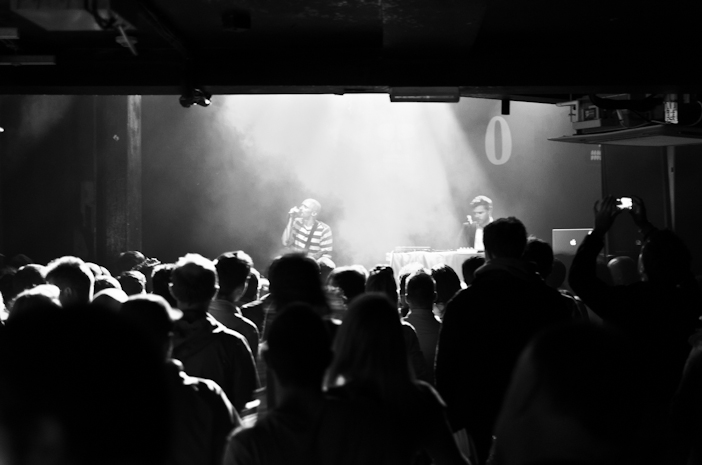 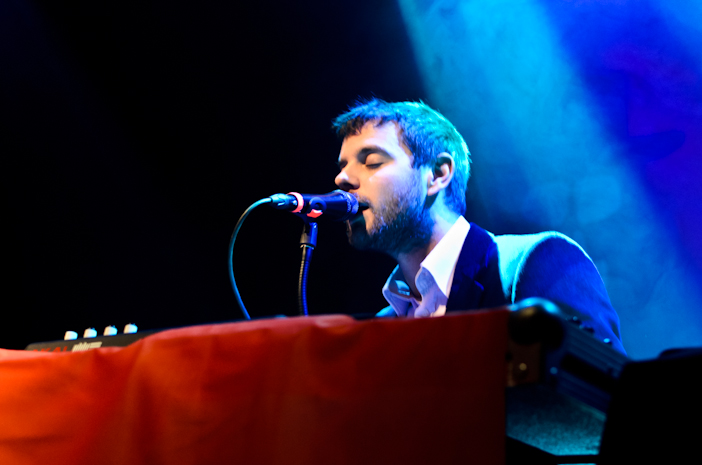 After 10 years of mainstream highs and personal lows, Mike Skinner finally called time on The Streets last November. Since then, he’s been busy making music as The D.O.T. with singer Rob Harvey, formerly of Leeds’ anthemic psychedelicists The Music, who’d guested on last year’s final Streets album ‘Computers And Blues’. It’s a productive partnership, with the pair posting numerous tracks and videos online this past year: last month’s fragmented debut album ‘And That’ contained seemingly just a random song selection, and tonight’s set contains half as many new ones again.

In open shirt and black jacket, Skinner plays host, sniffing his way onstage (“All I can smell in here is yeast. And farts”) and settling behind his mixing gear. Harvey’s more subdued, hood up, as the pair break into album opener ‘And A Hero’, sharing vocals as Skinner fires off classic rave blasts. The crowd are nodding along appreciatively but there’s no time for applause as Skinner cuts rapidly from one song to the next, Harvey shedding his hoodie and strapping on his electric.

There’s still a loose, work-in-progress feel to The D.O.T. tonight, Harvey’s skilled guitar soloing and strained soul vocals mixing variably with Skinner’s bolts of techno, house and garage beats. Odd tracks don’t quite gel, but there’s a large section of the crowd who clearly adore Skinner from way back, and a brace of more familiar songs (‘Whatever It Takes’, from Skinners’ Inbetweeners Movie soundtrack, through to the Streets-strength ‘Shut Up And Keep Talking’) see the gig take off, with dancing, grinding and waving breaking out across the room.

The huge “D! O! T!” chant (no, we still don’t know what it stands for: probably not the Department Of Transport though) that calls them back for their ‘You Never Asked’ encore proves that Skinner and Harvey have sustained a fanbase for this debut tour. As partially reformed hedonists, the duo now seem wise enough to care little for the mass appeal The Music aimed for and The Streets achieved, but the best of tonight’s show – its pounding club beats and considered comedown lyrics – hit home for many. Cult status, at least, seems assured.

Stuart Huggett grew up in Hastings, writing fanzines and blogs about the town’s underground music scene. He has been a regular contributor to SOURCE, NME, The Quietus and Bowlegs. His huge archive of magazines, flyers and vinyl is either an invaluable research tool or a bloody pain. He occasionally runs tinpot record label Dizzy Tiger, DJs sporadically and plays live even less.
← PREVIOUS POST
Brighton Rockers Interview
NEXT POST →
Major Lazer Review
Mailing List
Recent Posts
Website developed in Brighton by Infobo
Copyright © Brighton Source 2009-2020
The D.O.T. Review - Brighton Source