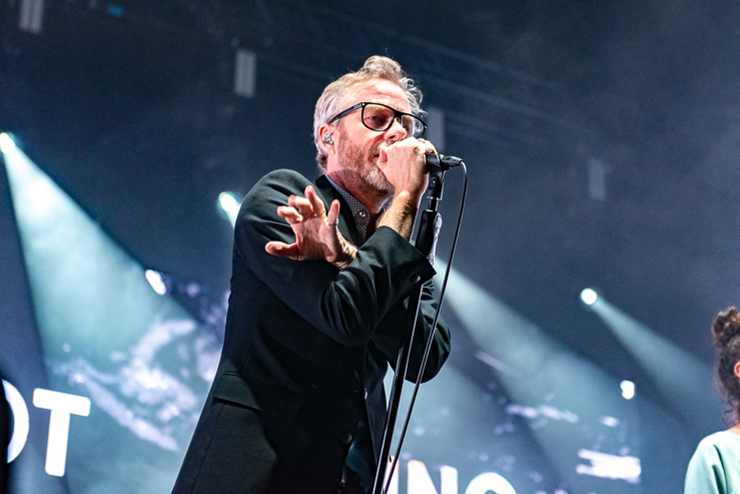 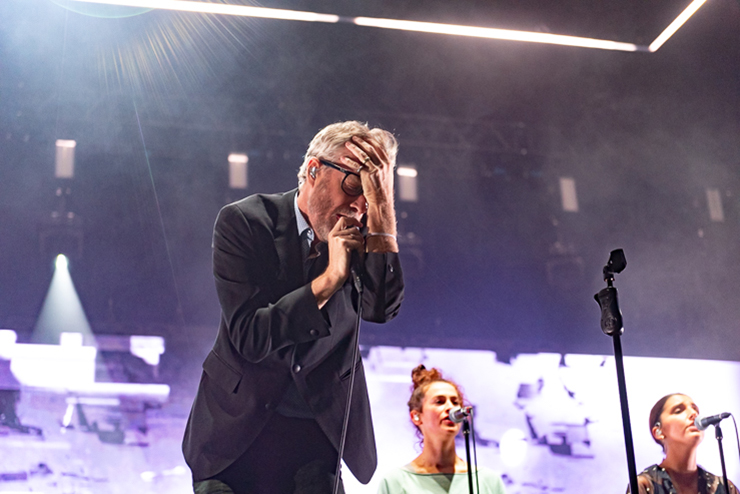 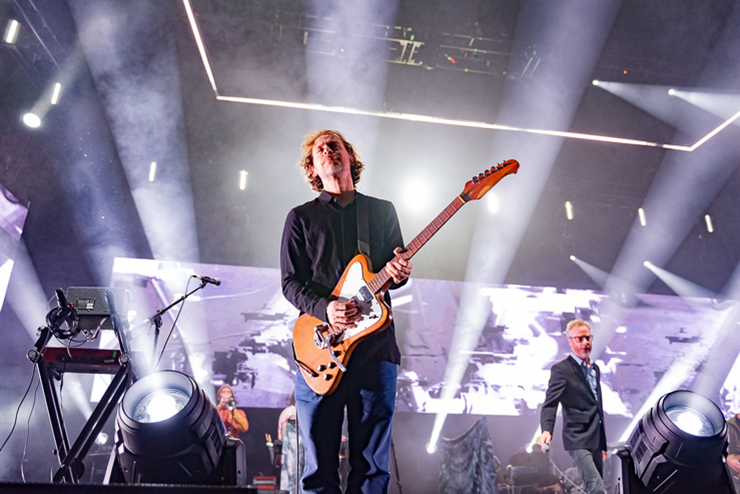 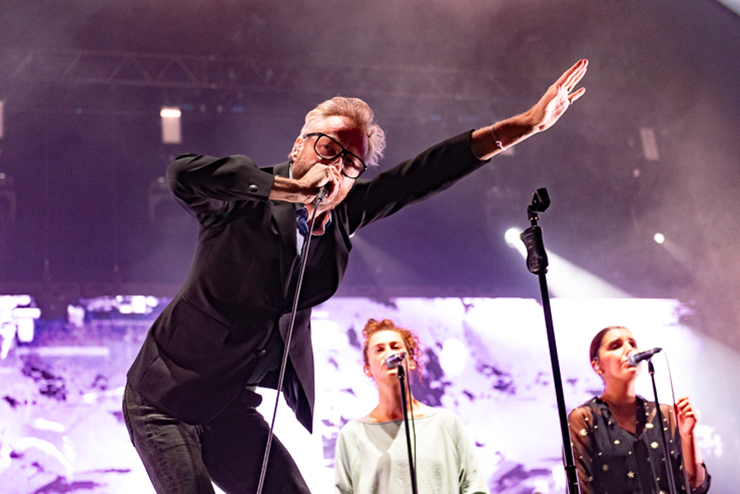 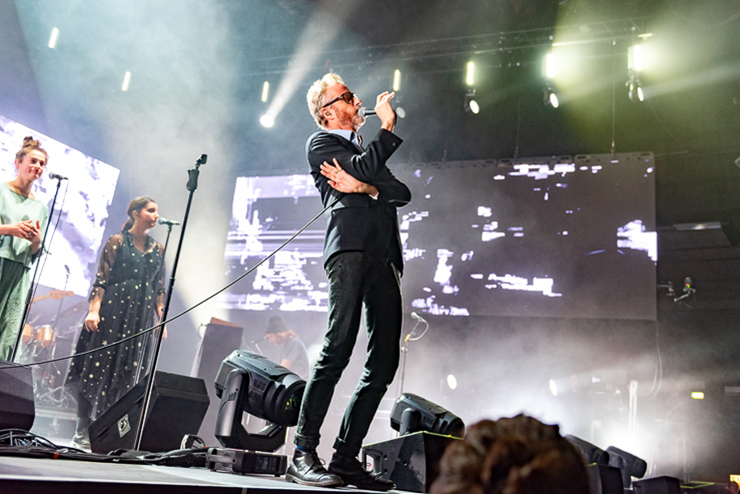 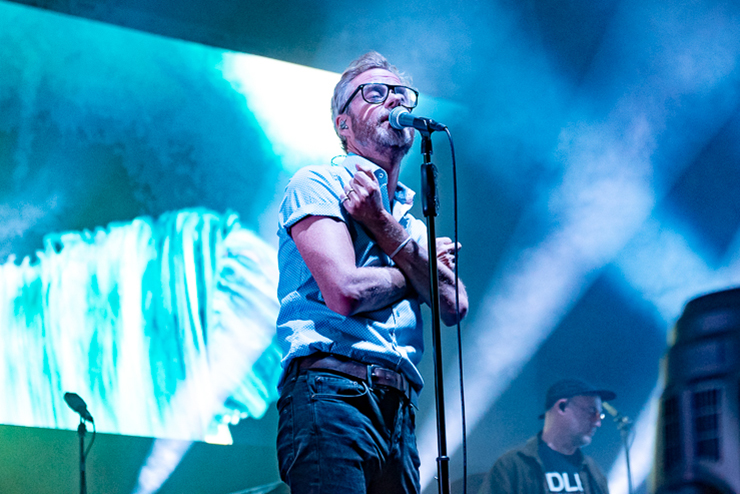 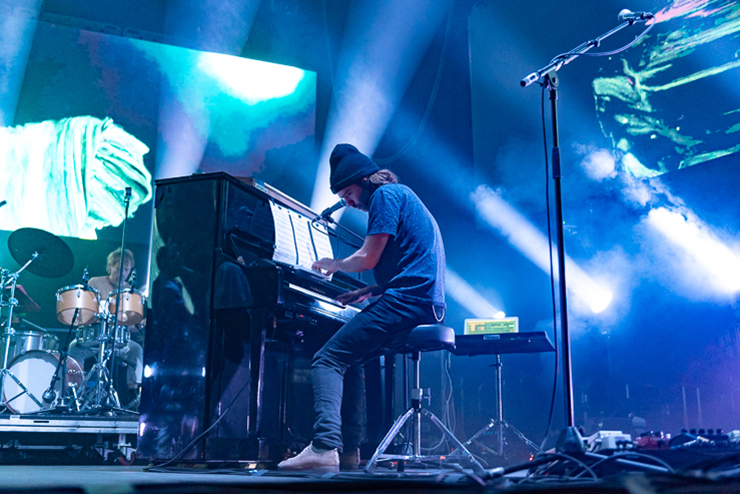 It has been nine years since The National were last in Brighton. They played at the Corn Exchange then and have come a long way in the past decade to be here tonight at a sold-out Brighton Centre.

The band start out with ‘Rylan’ from their 2019 album ‘I Am Easy To Find’ (the crowd are excited from the first verse) and they don’t really stop for the whole gig. The 10-piece band includes trumpet, trombone, piano and backing singers which means we hear faithful versions of the more complex arrangements from their recent records.

The band is a collection of siblings. Multi-instrumentalist brothers Bryce and Aaron are fantastic, playing off each other and clearly enjoying themselves after 20 years on the road, which says a lot. The other brothers, Scott and Bryan, provide a tight bass and drum pairing that propels the set along.

‘Bloodbuzz Ohio’, ‘I Need My Girl’ and ‘This Is The Last Time’ are a powerful trio of songs mid-performance and overall the set is balanced to cover their strongest material. However, there is one important negative that frustrates this SOURCE reviewer. For us, singer Matt Berninger is off throughout – he seems a little buzzed, pacing, furtively wandering around, and his mannerisms are strange.

Berninger ends up in the crowd a lot, as always, but his on-stage interactions seem scripted and forced. You might forgive that if the vocals were spot-on, but he just doesn’t seem to be present in voice. In fact, after the gig we had to re-watch several live performances on YouTube to check it wasn’t an anomaly. Earlier this year he was neither pacing around nor acting odd, but it seems his voice has always been a tad weak live… there is no way around it.

We also had the feeling that the older songs resonate more powerfully in a live setting. Comparing the songs played in 2019 with 2010 shows the strongest material to be present in both sets. After waiting a long time for them to return to Brighton it wasn’t exactly what we had hoped for, but the band were great. They nailed some of the songs perfectly and the rest of the crowd loved it, so who cares about the grumpy opinion of one reviewer?