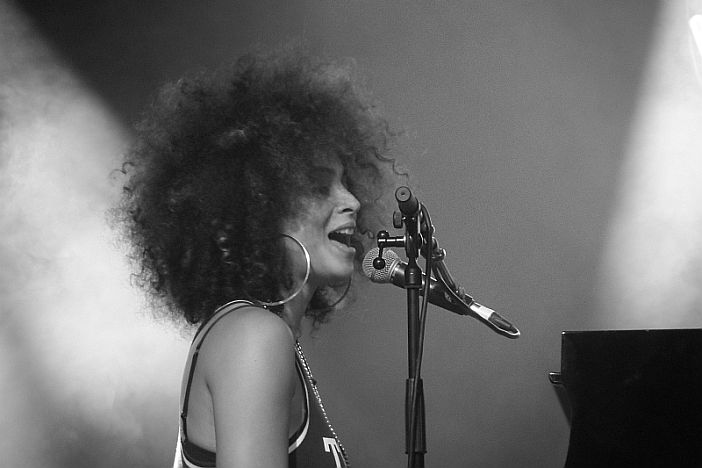 Welcome back to Sussex. You made a great impression back in April with your set in Brighton with Gregory Porter. How did you get on the tour and did you get to sing together?
I think it was through the label initially but I’m not 100% sure. We got to mess around with the band but I haven’t actually sang with him yet. I’d love to though. We stayed in a beautiful apartment near the beach and it was lovely walking through the Lanes after the show.

It’s on the Blue Note label – was this a dream come true?
It was actually yeah. Growing up I listened to Norah Jones a lot and Diana Krall, who is on Verve, so it was always my dream to be on one of them one day, then we got an offer from Verve and, later on, an offer from Blue Note and I ended up with them and here I am. It’s an honour to be label mates with Norah Jones as she is my idol and also the many other female artists who’ve been on the label.

When you played in Brighton there was an incredible reception for your version of ‘The First Time Ever I Saw Your Face’. Obviously Roberta Flack’s version is the best known recording – do you know if she’s heard it?
I don’t think so but it’s coming though. She’s gonna hear it. I’ve met many cool singers but not her. I would love to as I hear she’s really sweet.

You’re performing on the Arena stage this afternoon. Will you have time to check out any performances?
Probably but I’m not sure. I’ve got to do some VIP peformance after the show so I’ll have to see. I would love to see Grace Jones.

You are originally from Nashville. Do you still live there?
I sure do. I got a little house there and I finally became a homeowner last year. It’s my home and I love it.

There has been a lot of focus on your association with Prince since you were invited to sing ‘The Beautiful Ones’ at the Purple Rain 30th anniversary party – you’ve recorded this and there’s a video on YouTube but will it be released?
We talked about it after he passed away and we reposted it. I don’t know but I would love to.

In the video you are sketching a portrait of Prince, which shows you’re also a talented artist. Do you have any plans to exhibit or publish your artwork?
We actually talked about this last night. I’m definitely going to in the future and I could sell the originals but I think I might do prints that would come with the CD or something like that. I got to give the drawing to Prince and it’s in Paisley Park right now.

Do you prefer playing in clubs or concert halls?
Concert halls all day, aaall day. Clubs are cool but there are often issues with the sound. For me it’s all about the acoustics and concert halls exhibit your voice and tone and textures and the instruments really well.

You’ve collaborated with many diverse artists – do you have a favourite and who’s on your wish list?
Ghostface Killah was cool and Jesse Harris trained me to sing his songs. I got to write some music with Prince but I didn’t write lyrics for them. Stevie Wonder is an obvious choice or Norah Jones, who was my inspiration seeing her as a young woman. She’s beautiful and I love her. I’d love to do an album of duets.

Do you have a rigid writing process or is it more a case of when inspiration hits?
It can be both. Sometimes we’ll set up sessions and say “OK, we’re going to write today” or I get inspiration or a melody when I’m just cruising in my car so I’ll go home and write a lyric.

Have you started work on the second album?
Yes, we’ve got all the songs but not the final recordings yet. There are a couple that didn’t make the current album that absolutely have to be on the second. They’re all originals and one I wrote with British writer Blair MacKichan in Shepherd’s Bush.

What are your plans for the future?
I’ve got a compendium of songs ready for the second album and, I’ll give you an exclusive, one of the songs is called ‘Four Winds’ and oh my God it is the best song. We’ve been playing it at our soundchecks.

OK, I know you have to go now so thanks very much for making time to speak to us and have a great show this afternoon.
Thanks very much, appreciate it.